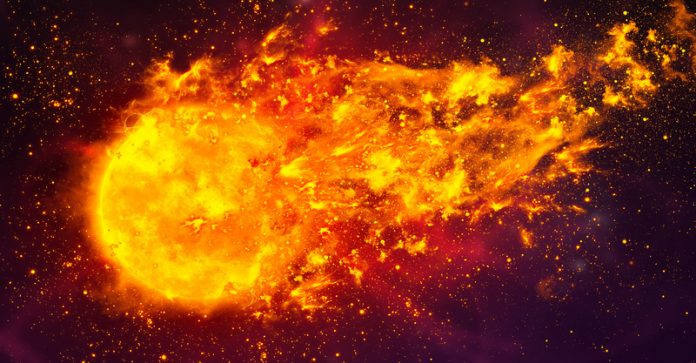 In the past decade, the count of trackable orbital debris has more than doubled, driven by collisions in space, several anti-satellite technology (ASAT) tests, the proliferation of CubeSats, a growing number of upper stages left in orbit and, in general, an intensification of the global space activity.

Today, around 23,000 objects reaching 10cm or larger are in the Earth’s orbit, along with 750,000 objects under 1cm. While debris is a normal consequence of the exploitation of space, events such as the Iridium-33– Kosmos-2251 collision in 2009, which occurred near 800 km in altitude, will continue to aggravate matters since debris fragments will linger menacingly in orbit for decades before re-entering Earth’s atmosphere, putting at risk manned spaceflight and operating satellites along the way.

While 93.7% of the rocket bodies and other debris in orbit is attributed to the United States, Russia and China combined, the loss of control of ESA’s bus-sized ENVISAT satellite in 2012 put Europe in a new position with a risk of adding to the maelstrom if it is shattered by debris collisions.

Mitigating the growth of orbital debris is, even more, pressing with the increasing commercial activity and impending smallsat megaconstellations from SpaceX, OneWeb and others which would sextuple the number of operating satellites in LEO from the 1,071 in current operation as at 31 August 2017. If left unresolved, access to space and operations in space will continue to increase in complexity and to face growing threats, with the ultimate risk of losing the capacity to explore and use space.

Europe’s Effort in the Field of Orbital Debris

Europe has proactively undertaken a variety of actions in the field of orbital debris mitigation, including strategic, policy and diplomatic efforts at European and international levels, but also programmes through national institutions, ESA and the EU to develop European capabilities in this field. Examples of the European effort include:

The European Union also established an SST Support Framework in 2014 with the participation of Europe’s largest national space players (France, Germany, Italy, Spain and the United Kingdom). In the diplomacy domain, the European Union launched an initiative for an International Code of Conduct for Outer Space Activities (ICoC) in 2008 to achieve enhanced safety and security in outer space through the development and implementation of transparency and confidence-building measures (TCBMs). European actors have also played a strong role in the development of the UN COPUOS’s Space Debris Mitigation Guidelines, endorsed by the UN General Assembly in 2007.

Yet, additional European leadership will be needed to fully respond to the emerging space traffic challenges presented by various trends, including the incoming LEO mega-constellations and increased risk of collisions. Currently, Europe’s SSA capabilities are limited and European agencies and operators must rely critically on data services supplied by the U.S. and other international partners to track smaller space debris.

Dependence on others for SST should raise concern at the strategic level. While the EU SST Support Framework is a good step toward filling in that potential gap, the current approach is viewed as too limited to provide the level of detail required to monitor smaller pieces in LEO and would require a much more substantial investment to develop a fully independent European SSA capability.

While the international space community can agree that the mitigation of orbital debris should be made a priority, reaching the required global consensus on the steps to pursue seems unlikely in the near term. Because guidelines are unenforceable by nature, orbital debris mitigation rests predominantly on the amount of goodwill that states are willing to extend in voluntarily restricting themselves and their national operators from creating debris. Here the major space powers in this debate will likely continue to privilege their freedom of action in their activities over submitting to binding restrictions from international organisations, to ensure the security of their assets in orbit.

Since we are left with no choice but to accept this current status quo, where government activities are not bound by any kind of “hard law” or international binding agreement, we must continue to place our faith in the wisdom of institutional space players. Yet, the interests at stake would be different if the principals of the ICoC applied only to commercial activity. Here, even the major space players could reach an accord, so long as the arrangement does not bias the international competition – i.e. the same rules would need to be applicable to all private operators worldwide and would require proper enforcement mechanisms to ensure their correct implementation. This could be a sound basis for a revised ICoC, limited in scope to commercial activities, but addressing the most critical and worrisome challenges anticipated with the increase in space traffic.