Gudlaugur Thór Thórdarson, Minister of the Environment, Energy and Climate in Iceland, discusses renewable geothermal energy, which in his opinion, is a climate champion for the clean energy transition

The climate crisis is at its core an energy issue. Fossil fuels are the main source of anthropogenic carbon emissions. Coal, oil and gas powered the industrial revolution. Yet, there are solutions in clean energy options like renewable geothermal energy.

Today there is still a huge demand worldwide for more energy, understandably so in developing countries. But we cannot burn fossil fuels for much longer without inviting a planetary climate catastrophe. For disaster-free development we urgently need clean energy.

Luckily, Iceland is blessed when it comes to renewable energy sources. Hydro energy is abundant. The wind energy potential is perhaps the best in Europe. Tidal and wave energy are enticing future possibilities. (Solar? Well, you can’t have it all.)

How is geothermal energy the best form of clean energy in Iceland?

And then there is geothermal. Much of Iceland is really an active volcano, where the Earth sweats off the internal heat from its molten interior. It makes for dangerous living at times, but from an energy perspective, this is a blessing for a cool country. Today, Iceland gets almost 100% of its heating and electricity from renewables, hydro and geothermal.

Often overlooked in the discourse on renewables. Geothermal is a clean and tested energy source that is actually widely available around the globe.

Iceland is a pioneer in utilising renewable geothermal energy. Our capital, Reykjavík, takes its name from the plumes of steam from hot springs that greeted its first Norse settlers. Yet, the city was heated by coal until Icelandic engineers found ways to bring natural hot water into houses.

Today over 90% of houses in Iceland are heated with geothermal. The benefits are immense, in the form of energy security and clean air, in addition to low energy bills. The countless swimming pools and spas that dot Iceland are a nice bonus, as well as greenhouses that bring our sub-Arctic nation fresh tomatoes and flowers year round.

Today, Icelandic know-how in geothermal utilisation is an export item. Icelandic experts are working on geothermal projects all over the world. For a long time Reykjavik could boast the biggest geothermal utility for house-heating in the world; today that title belongs to the city of Xianyang in China.

Geothermal is not only expanding in China, but also in Indonesia, East Africa, Central America and elsewhere. Active volcanic zones are hot spots of renewable geothermal energy use, but geothermal can also be harnessed outside such regions. As with other fields of renewable energy, innovation and technological development are lowering costs and expanding opportunities.

Geothermal steam used for electricity generation contains some CO2. Icelandic scientists wondered if it was possible to pump the CO2 underground and store it there, as the basalt rock is porous and very receptive to carbon. An experimental project was set up and – lo and behold – the dissolved carbon dioxide did indeed solidify into minerals in the rock pores. The process even turned out to be quicker than predicted.

This pioneering process, dubbed Carbfix, has now moved on. Carbfix has teamed up with the Swiss company Climeworks to launch the world‘s largest direct CO2 air capture and storage plant, located at the Hellisheiði geothermal power plant near Reykjavík.

While in an early stage, this gives hope that we can employ direct air capture of CO2 anyplace where suitable basalt rock is found. Viable direct air capture could be a game changer in our quest to reach net-zero carbon emissions on a global scale.

So, has Iceland, with its renewable energy plus carbon capture, met its climate goals? No. We have set very ambitious goals regarding clean energy and climate mitigation. We want to phase out fossil fuels completely and reach carbon neutrality before 2040. These goals will be hard to reach, but we want to rise to the challenge.

One priority is decarbonising mobile sectors. With passenger cars, things are going well. Iceland is now #2 in the world, behind Norway, in the share of electric cars of total car sales, thanks in part to generous tax exemptions for clean cars and a rapid government- supported build-up of charging stations.

For ships and airplanes, things are tougher – the transformation from fossil fuels has barely begun. We have an electrical ferry in Iceland and some experimental projects in other fields, but we rely on imported technology in aviation and ship engines.

This task is a tricky one. Iceland has ample untapped renewable energy sources, but many projects would affect Iceland’s unique nature, which is our heritage and a magnet for foreign tourists. So, the task is to find a compromise between two green goals: Conserving our nature and harnessing our clean energy sources for the benefit of Earth’s climate. I am convinced we can achieve both.

Iceland wants to be an example to others in climate affairs. We want to be first in completing a clean energy transformation. We want others to compete with us in reaching that goal – the main winner in such a race would be Planet Earth. 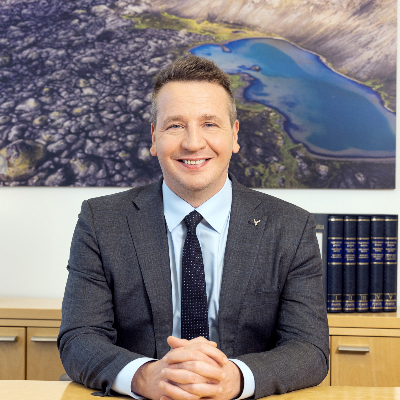 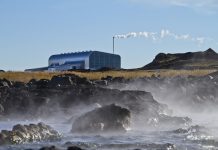