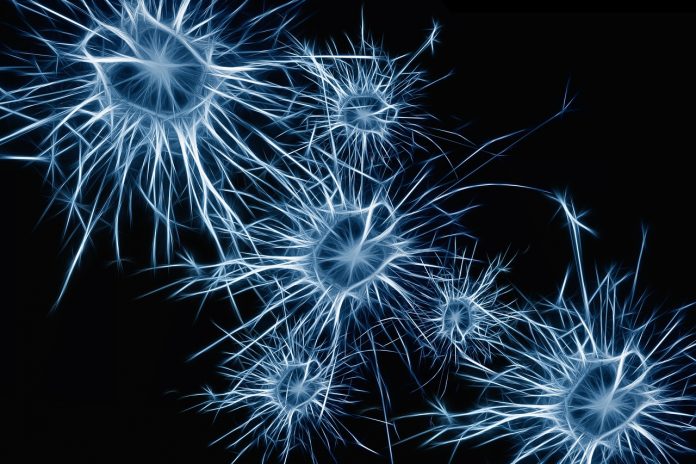 Stroke is a major cause of morbidity and mortality worldwide, but research into spontaneous brain plasticity could offer hope for recovery

Among the main causes of brain injury, ischemic or haemorrhagic stroke burdens the life of hundreds of thousands of people each year. Approximately half of the survivors are susceptible to suffer from lifelong losses in sensory, motor, cognitive, and emotional functioning, depending on the size and localisation of the lesion. The limited degree of spontaneous recovery implies a large personal and societal burden in lost productivity, lost independence and social withdrawal. The substantial problem of long-term disability in stroke has long prompted investigation into the mechanisms of neural repair.

Facilitating the recovery processes by improving functional outcome is indeed among the highest priority in translational neuroscience. An appealing approach to this aim is augmenting the brain’s normal capacity to reorganise itself after injury.

Let us see in more detail what we mean when we talk about reorganisation, i.e. spontaneous brain plasticity. Studies in humans and laboratory animals show that partial recovery of sensorimotor impairments during recovery from stroke can be attributed to adaptive changes (i.e. spontaneous plasticity) in surviving functionally homologous brain regions. To be more explicit, areas of the brain that remain unaffected by injury to some extent can take over functions formerly mediated by the damaged areas. Reshaping simultaneously takes place at multiple levels, involving modulation of functional and structural connectivity over many scales.

Here, we will focus on dynamic changes in single cell shape and morphology, namely “structural plasticity”. This phenomenon underlies the rewiring of the brain’s circuit at the synaptic level and is mirrored by functional remapping at the cellular and network level. Reshaping at the dendritic and axonal level presumably enables areas interconnected to the damaged region to assume some of its functions.

Historically, optical imaging has been a fundamental tool for investigating physiological processes spanning multiple spatial and temporal scales. This flexibility derives from its unique properties, such as high temporal and spatial resolution within reasonable thicknesses of tissue, numerous contrast mechanisms, and the modest cost of instrumentation. Traditional optical microscopy techniques such as widefield or confocal microscopy imaging are not capable of penetrating more than several tens of micrometres into the optically highly scattering brain tissue, which significantly limits in vivo applications.

Recently developed high-spatial resolution optical imaging technologies capable of penetrating up to one millimetre into the tissue greatly extended the range of investigation of dynamic events in vivo. In a pathological context, live imaging provides clinically relevant data on the spatial and temporal patterns of tissue injury and repair, to improve interventional therapies, and leads to the discovery of novel markers of recovery. The observation and interrogation of single cells and even their processes in real time in their natural environment, thereby preserving the complex ensemble, revolutionised our knowledge on brain plasticity and recovery after injury. With these techniques, a detailed characterisation of the events that follow stroke has been possible.

By real time observation with two-photon imaging, recent studies demonstrated a period of rapid synaptogenesis and circuit plasticity within the first weeks after stroke. A transient loss of dendritic spines has been reported to take place within hours of a stroke in the neurons that are destined to survive. Starting in a later phase and reaching its peak within the first 2 weeks after stroke, increases in dendritic spine number and in spine turnover rates in cortex take place within millimetres of the infarct. As shown in panel 1 of Fig.1, cells close to the infarct undergo complete and irreversible disruption of neuronal structure immediately after stroke. In the weeks that follow, massive reorientation of dendrites and blood vessels takes place in the peri-infarct region (panel 2). This large-scale rearrangement obviously affects synaptic connectivity, which can be longitudinally quantified in terms of turnover (i.e. disappearance and formation) of spines and varicosities (panel 3). 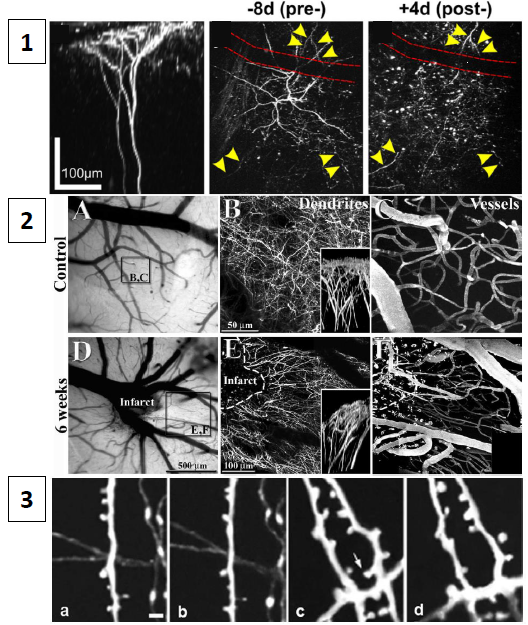 Dendrites and axons remodelling takes place not only in the peri-infarct region, but also in the contralateral cortex. Structural changes at the synaptic level in the opposite hemisphere has been linked to the reliance of the animals on the unimpaired limb. Recent studies suggest that local cortical lesions result in increased dendritic branching in excitatory neurons of the undamaged, contralateral forelimb motor area and increased numbers of dendritic spines per neuron.

These changes are use-dependent: they are blocked if the animals are prevented from using the unimpaired limb, and are amplified if animals are able to use that limb to perform complex tasks. Exposing rats to an enriched environment might also augment dendritic spine complexity in cortex contralateral to the stroke site. In parallel with structural modification of synaptic structures, profound reorganisation of axons after CNS injury has also been documented by ex vivo and in vivo imaging studies in experimental stroke models.

Mapping of cortical projections allowed determination of a robust post-stroke axonal sprouting response that is responsible for remapping the normal body representation. Longer distance axonal sprouting also occurs within the hemisphere ipsilateral to the stroke site. Massive axonal rearrangements are likewise seen in primates after brain injury. Presumably, these changes underlie the shift in functional maps described above and elsewhere. Together, these studies show that stroke, and brain injury in general, lead to the formation of new local circuits and long-distance connections.

Nonetheless, the extent of this spontaneous reorganisation remains constrained by many endogenous factors. Strategies that promote spontaneous brain plasticity like motor training can enhance rewiring and dramatically improve functional outcome in animal models of stroke or of other types of CNS injury. In animal studies, motor training after ischemic injury is most effective for restoring behavioural performance, peri-infarct neurophysiological maps and enhanced neuroanatomical changes in the ipsi- and contralesional hemisphere when introduced within the first week of injury.

By exploiting two-photon images of neuronal dendrites and axons, our preliminary investigation show how one month of light rehabilitative training stabilised the synaptic contacts of spared neurons in the peri-infarct area. The recovery of physiological turnover is flanked by the reinstatement of dendritic and axonal random orientation. We believe that our knowledge on stroke-induced plasticity and on the modalities to improve it will greatly benefit from future optical microscopy studies investigating the effect of different therapeutic strategies by combining complementary imaging modalities.

Department of Physics, University of Florence