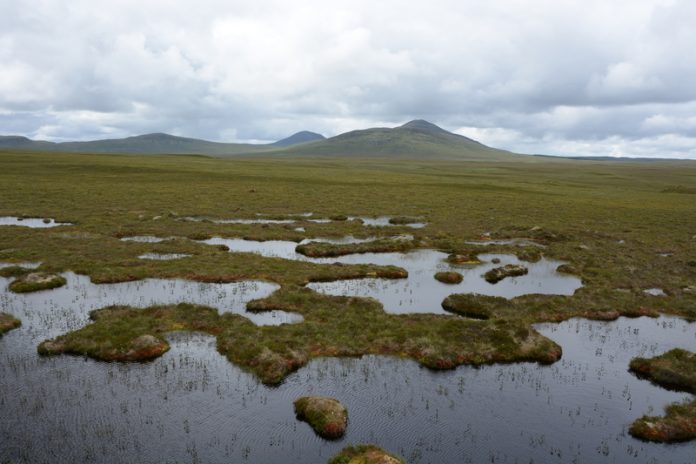 In this third contribution of a series of four, Bernd Lennartz, Haojie Liu and Franziska Tanneberger give insight into the water-bound loss of carbon from peat soils

While the CO2 emissions from artificially drained peatlands, the gaseous loss of carbon, has been recognized as one of the major sources for accumulating greenhouse gasses in the atmosphere, the dissolved organic carbon fraction and its possible impact on downstream waters, has not been equally noticed.

The loss of peat to our waters

Peat soils in a pristine state consist of organic material, basically plant residues, which are not mineralized because of a prevailing high moisture content and the absence of oxygen. Peat soils belong to the organic soils, characterised by their high content of organic matter. Especially in the temperate and tropical regions, peatlands were artificially drained, which goes along with the aeration of the soil and the onset of mineralization processes, resulting in the ongoing degradation of the peat soils and the corresponding loss of carbon. There is overwhelming evidence that the drainage of peat soils turns peatlands from a carbon sink into a carbon source and the release of CO2 is the major pathway for carbon (see also the first part of this article series: https://www.openaccessgovernment.org/agricultural-short-term-usage-leads-to-peatland-degradation-with-millennia-lasting-consequences/114592/).

Dillon and Molot have already shown in 1997 that the DOC export from a watershed is highly dependent on the fraction of peatlands in that catchment. In a recent global study it was found that peatlands may be responsible for 12 to 20% of total DOC loadings to the oceans (Rosset et al., 2022), which confirms the significant role peatlands have in the aquatic carbon cycle.

High DOC release rates into the fluvial system are not desirable because the microbial facilitated degradation and transformation of the DOC is oxygen dependent and causes an oxygen reduction in water, which may have adverse effects on the aquatic fauna. A similar observation can be made if wastewater is released into surface waters. (The organic matter content of wastewater is surely manyfold higher than in discharge from peatlands.) Also, DOC may serve as a food source for microorganisms, which could trigger an intensification of the food web of downstream waters. Not only the river system but also coastal waters may be affected. High DOC loadings have, likewise, been reported to increase greenhouse gas emissions from surface water bodies.

Peat soils are categorized according to the boundary conditions of the peat formation process and dependent on the dominant plant species. Bogs are also called ‘ombrometric’ organic soils, which refers to the term ombrometer or rain gauge. Bogs are solely fed by precipitation and the soils are, thus, very nutrient poor and the peat forming plants have developed a variety of strategies to cope with the nutrient deficit (such as Drosera, an insect consuming plant). In contrast, fens are also groundwater-fed and the concentration of nutrients in pore water is generally higher than in bogs. While bogs are dominated by Sphagnum species, the peat of fens is formed by sedges, grasses such as Phragmites, brown mosses and wood from tree species such as birch or alder.

Pore water samples were collected from 159 sampling locations from 44 peatland field sites (11 bog and 33 fen sites) in European countries (Germany, Sweden, Poland and the UK). Among the 44 research sites, 20 were natural, 10 drained, and 14 rewetted peatlands. From the analysis of the collected dataset (Liu et al., 2019), it appears that the DOC concentration in fen systems is generally higher than in bogs (Figure 2). It is not quite clear if that observation is related to the peat forming plants or to the more nutrient-rich environment of fens, which facilitate an accelerated biochemical cycling. It is also possible that the fens from which data is available are in a more mineralized state than the considered bogs (see also below and Figure 4). It seems in any case required to take the origin and dominant peat forming plant material into consideration when analyzing DOC processes in peatlands.

The majority of our peatlands in the temperate region has been artificially drained to enable agricultural usage. The related negative consequences for the peat soils and the climate system have been identified and documented. Drainage causes a degradation of the organic soils which goes along with a subsidence of the soil surface and an increase in soil bulk density, which can be employed as an indicator for the status of degradation (Liu et., 2020). Now that we have recognized the impact of exploitation of peatlands, restoration and rewetting are gaining momentum and even large scale projects with hundreds of hectares of rewetted land are initiated.

From the existing data covering a few decades of rewetting history, we can learn that restored peatlands do not present a natural state because highest DOC concentrations were observed in rewetted peatlands (Figure 3). It is likely that a certain stage of equilibrium regarding degradation and carbon transformation processes is reached under drainage conditions. This quasi stable situation is disturbed upon rewetting, resulting in high DOC concentrations. There is currently insufficient data to prove that also under a rewetting scenario, DOC concentrations stabilize on a lower level in the long run. For the time being and from the available DOC data, it can be stated that rewetted peatlands have a unique status, which does not necessarily compare to the original, pristine peatland. Rewetting of the formerly drained peatlands may result in a new ecosystem as recently pointed out by Kreyling et al. (2021).

The bulk density is a good indicator for the degree of mineralized organic matter and the status of peat soil degradation. It is likely that the mineralization process not only produces CO2 and H2O but also solvable organic molecules. It is, thus, to be expected that with an increasing bulk density, DOC concentrations in pore water likewise increase (Figure 4). Rewetting measures shall, therefore, take the conditions e.g. degradation status of the soil into account to avoid any high DOC loadings of downstream waters.

Concentration versus flux and carbon export

So far we have considered DOC concentrations but high DOC concentrations in ground and pore water of peatlands do not necessarily result in a DOC pollution of downstream waters. The hydrology and to what extent the peatland is hydraulically connected to adjacent ecosystems and waterways are, likewise, important drivers for the export of DOC from peat soils.

The concentration alone cannot be directly converted into DOC flux and the export of carbon from a field or landscape. For the calculation of loads that are transported by a river (also called flux) and/or exported from a given land area, the volumetric discharge (for instance in m3 per second) is required. However, even if all data is at hand, we cannot be sure that it is the peatland of a river basin, which is the dominant source for downstream DOC. Other point and diffusive inputs such as runoff from arable land, farm yards or sewage plants may be the cause for high amounts of organic matter in rivers and streams.

Here comes the isotope technique into play, which allows to determine the age of water and intensity of mixing processes within a catchment. For instance, Soulsby et al. (2015) found that water draining from a peatland within a catchment was 4 years old, while the overall age range of catchment discharge was from a few months to 8 years. The assignment of an age to water from a specific portion of land within a catchment helps to quantify the DOC fraction, which originates from peatlands in rivers.

We have to point out that the available data for DOC fluxes is scarce; in most publications only concentrations are reported. In a very recent meta-study on DOC export from peatlands, Rosset and colleagues (2022) found only 17 sites for the temperate climate region, for which DOC export data was documented, confirming the unsatisfied data situation.

We calculated from our database (Liu et al., 2019) an export of DOC from less than 200 to over 400 kg carbon per hectare and year (Figure 5). The order of magnitude of values is confirmed by the newer study from Rosset and colleagues (2022). To put these numbers into perspective, it can be referred to the gaseous carbon losses, which have been found to be appr. 10 times the values we are reporting here.

The impact of peat soil management on DOC fluxes somehow reflects the differences in DOC concentrations (Figure 3) although drained and rewetted sites have different flow regimes.

Although DOC might only contribute 10 % to the total carbon export from drained peatlands, it might have a far-reaching impact on downstream’s aquatic life. From the little data we have, we recommend that DOC export monitoring should be mandatory for every rewetting project. Emphasize should be laid on capturing water fluxes from rewetted fields by gauging groundwater levels and volume fluxes in adjacent ditches. If continued over longer periods, this will help us to understand how to avoid exaggerated DOC export from rewetted peatlands.