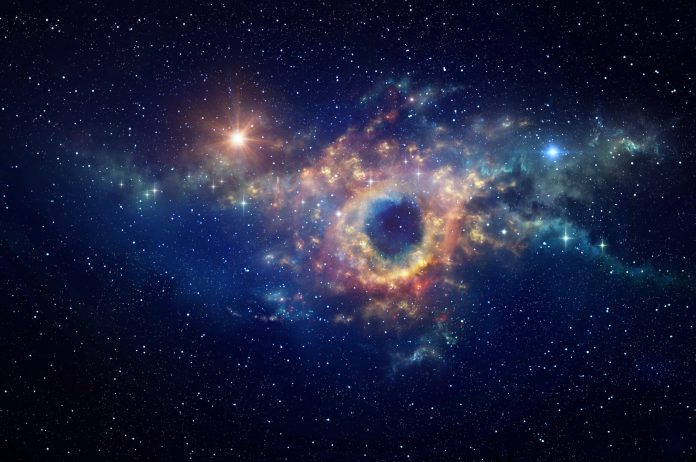 Black holes are the most enigmatic objects in the universe. They form when massive stars collapse in on themselves, under their own gravity when they run out of nuclear fuel. Inside black holes, matter is compressed to a single point, the infamous singularity where time ends.

The existence of black holes poses is a paradox. It is as if physics destroys itself. As such, black holes play a role in science similar to that of atoms a century ago. According to the laws of physics at the time, atoms could not exist. But experiments taught us that nature had found a solution. This eventually led to the discovery of quantum theory which changed the way we conceive the world and opened up a technological revolution that continues today.

Black holes are the atoms of the 21st century. Their existence reminds us of the biggest open question in physics: how to reconcile the macroscopic world of gravity and cosmology with the quantum world of nuclear and particle physics. We have every reason to expect that the unification of these two perspectives will be as revolutionary as the discovery of quantum theory a century ago. But how can we experiment with black holes? This is where gravitational waves come in.

When black holes in the distant universe collide and merge, they shake the very fabric of space, creating wavelike disturbances of space-time, known as gravitational waves. These gravitational waves travel outward at the speed of light, rippling undisturbed through the universe and carrying a truly immense amount of energy. In its final instant, a single merger of a black hole pair can emit more energy into gravitational waves than the combined power of all light radiated by all the stars in the observable universe.

Yet, the amplitude of gravitational waves is extremely small because space-time is extraordinarily stiff. Nevertheless, on 14th September 2015, by ingeniously employing laser interferometers to monitor the length of several miles long vacuum tubes to a precision of a thousandth of the width of a single proton, the LIGO Scientific and Virgo Collaborations (LVC) succeeded for the first time to detect a burst of gravitational waves passing through our planet. Analysis based on Einstein’s relativity theory revealed that this resulted from the inward spiral and merger, more than a billion years ago, of a pair of black holes of around 30 solar masses each. Subsequent observation runs harvested several tens of such gravitational wave bursts, originating from a wide variety of coalescing black holes and neutron stars.

These groundbreaking detections unlock the dark side of the universe. Gravitational waves provide a new sense for scientists to explore the universe. Their observation yields access to hitherto unexplored regions of the universe that are dark, including the environment near black holes, or where light can’t penetrate, such as the earliest stages after the big bang. Their rich discovery potential spans fields ranging from astrophysics and cosmology to nuclear physics and high-energy physics.

However, to exploit the scientific potential of gravitational waves, a new observatory is needed. This is Einstein Telescope, a stunning marvel of engineering envisaged as a triangular configuration of six nested laser interferometers with 10km arms constructed deep underground, operated at cryogenic temperatures and employing innovative technologies in optics, metrology, seismic isolation plus sensor and control systems.

Einstein Telescope is the European entry ticket to take the lead worldwide in gravitational wave science. Funded through Interreg V-A Belgium – The Netherlands and Euregio Meuse-Rhine programmes, a Consortium of nearly 20 research institutions and universities from The Netherlands, Belgium, Germany and France are collaborating on a prototype, Einstein Telescope Pathfinder, conceived to develop and de-risk some of the key novel technologies on which Einstein Telescope relies.

With the political support of five European countries, Belgium, Poland, Spain and The Netherlands, led by Italy, the Einstein Telescope Consortium comprising about 40 research institutions and universities, located also in France, Germany, Hungary, Norway, Switzerland and the United Kingdom, has submitted a proposal to the 2021 update of the ESFRI roadmap of the European Strategic Forum for Research Infrastructure to realise Einstein Telescope.

When Einstein Telescope will be operational in the early 2030s, it will annually detect up to a million gravitational wave bursts from sources distributed throughout the entire universe. Employing new computing methods based on artificial intelligence, its data will enable scientists to probe the nature of gravity under the most extreme conditions and to read the universe’s history with unprecedented precision all the way back to the dark ages, the era before the formation of the first stars.

The power to reimagine

Einstein Telescope is what one terms a ‘cathedral project’, the modern equivalent of the grand church buildings, that has the potential to inspire grand new ideas that fundamentally change the way we look at the world.

Of course, some feel that limited resources for science should be deployed in areas such as those addressing climate change, rather than blue-sky research. These views can be persuasive, but are misleading. Fundamental research is every bit as important as directed research, and through the virtuous circle of science and innovation, they are mutually dependent. Facilities of the calibre of Einstein Telescope act as magnets that bring together bright minds from a wide range of backgrounds and countries in a stimulating eco-system in which creative and innovative research, ground-breaking entrepreneurship and unique educational opportunities reinforce each other and thrive.

Colliding black holes matter because the mind-bending concepts and the sheer depth of the questions they encourage us to explore, provide a uniquely powerful trigger to reimagine our world. And it is the power to reimagine that will ultimately be humanity’s biggest asset in the coming decades when we carve out our long-term future on this planet of ours and beyond.