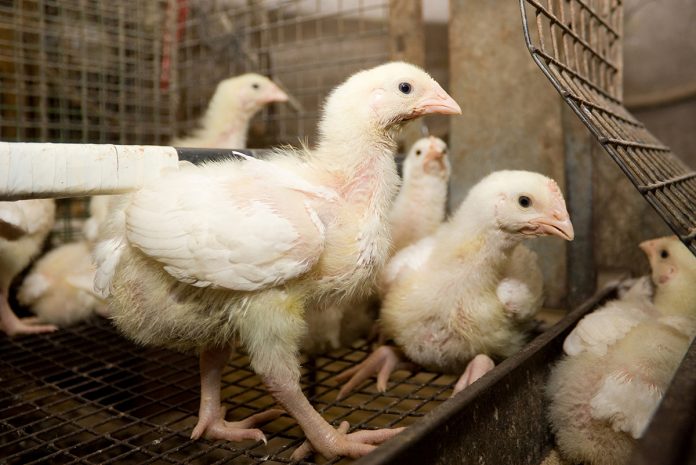 Dr Macdonald Wick, Associate Professor at The Ohio State University’s Department of Animal Sciences explains why Woody Breast is a hard problem for the poultry industry

Several decades of selective breeding have changed the genetics of chickens, with breeders selecting for faster growth, ever-increasing body weights, but more specifically, increased breast muscle (P. major) meat to carcass ratios (breast muscle yield). This has resulted in the generation of ‘broiler’ chickens – genetically designed for meat production. Optimisation in genetics and nutrition have contributed to affordable and plentiful poultry. In 2016, over 15 million metric tonnes of broiler meat was consumed in the US and nearly 90 million tonnes worldwide. However, this success has not been without costs – both for the birds themselves and consumers.

In addition to systemic challenges, these genetic and rearing strategies, have contributed to correlated increases in developmental breast muscle abnormalities (myopathies). These myopathies result in decreased consumer acceptability. The two most important myopathies currently challenging the poultry industry are white striping and wooden breast. Studies have reported a strong correlation between white striping and wooden breast. It has been argued that accelerated growth, breast muscle yield, with the accompanying impaired vascularity are predisposing factors to all three anomalies. Macro- and microscopic characterisations of white striping and wooden breast have striking similarities, including mild to severe edema hemorrhagic/inflammatory lesions and loss of vasculature (pale/yellow colour). Microscopic similarities include polyphasic degeneration, perivascular necrosis and infiltration of connective and fat tissue.

Muscle development – or ‘myogenesis’ – is a complex yet tightly regulated temporal and spatially specific process in poultry that begins with the embryo while still in the egg. Precursors to muscle cells, known as myoblasts, migrate and fuse together to form fibres known as myotubes, which subsequently differentiate into mature muscle fibres. The molecular/cellular mechanisms induced by the genetic selection for the increased growth ratio of a single muscle, the P. major, remains unresolved but it is likely that it lies at the root of the myopathies.

Wooden breast was first described in live broilers as extremely stiff breast muscles that could be detected by palpation. The phenotypic hardness of wooden breast is associated with varying degrees of firmness, pale colour, surface haemorrhaging and white striping. The hemorrhagic lesions and diffuse, hardened areas, when examined histologically, exhibit polyphasic degeneration, perivascular necrosis, interstitial inflammation, perivenular infiltration of T lymphocytes with the infiltration of connective tissue and fat. Hypoxic conditions limit the regenerative capacity of muscle fibres by favouring the replacement of degenerated muscle fibres with lipid and fibrotic tissue. Various potential contributing factors to wooden breast have been identified, such as localised muscular hypoxia, oxidative stress within the affected muscle and increased levels of intracellular calcium.

Not surprisingly, these anomalies can have a significant impact on consumer acceptability, most notably through visual, white striping and textural, wooden breast, changes. With white striping, the surface of the breast muscle exhibits white strips of fat tissue. In the case of wooden breast, there is an increase in compression force and shear force using Allo-Kramer, Warner-Bratzler shear force analyses. As such, these affected breast muscles are often downgraded or even condemned. The potential economic loss due to downgrading was previously offset by the continued gains in growth and breast muscle yields and management practices which minimised the predisposition for the myopathies. Unfortunately, since the initial description of these anomalies, the industry has experienced a rapid increase in the percentage of affected broilers within a given flock, as high as 90%.

There is ample data to support an association between white striping and wooden breast, with nearly all reported cases of a wooden breast having some degree of white striping. In addition, the onset and severity of each anomaly is influenced by: Genotype (high > standard breast yield), gender (males > females), growth rate (fast > slow), diet (high > low energy), P. major breast muscle weight (heavy > light) and slaughter weight (heavy > light). Again, the cause and effect relationships underlying this association have not been reported.

Many studies are underway, using combinations of transcriptomic, proteomic and statistical modelling to elucidate the molecular mechanisms underlying poultry muscle growth and development to elucidate the molecular/cellular mechanisms of white striping and wooden breast. These studies are focused on various influences – both genetic and environmental – that affect poultry muscle development, as well as the post-slaughter conditions that directly affect meat quality with particular emphasis on meat processing characteristics.

New information is emerging, using combined morphological and quantitative transcriptomic strategies in which the P. major of broiler chickens were evaluated for the changes in muscle-specific transcription factors and the morphology of the breast muscle every other day post hatch until market weight to elucidate the myogenic signals and proteins associated with the progression of white stripping and woody breast. The data supports the notion that white striping is a harbinger of wooden breast and that nutrition can play a role in reducing the onset of wooden breast. That is, reducing growth rates can delay the onset of myopathies.

In conclusion, the demand for inexpensive, affordable poultry meat has pushed chickens and turkeys to their physiological limits – impacting the welfare and muscular health of the birds, as well as the quality of their meat. Studies are underway in an attempt to unravel the biological mechanisms behind muscle problems in poultry. These studies will eventually lead to the establishment of biomarkers for future breeding strategies that balance welfare with the economic value of meat products.

For example, recent reports describe the macroscopic changes associated with WB ontogeny in the development of a ranking system and the contribution of growth parameters in the determination of rank wooden breast severity. Results suggest that physical measurements inherent to selection for high-yielding broiler genotypes are contributing to the occurrence and severity of both white striping and wooden breast. These studies are leading to a ranking system to describe the ontogeny of wooden breast and a model relating the rank probabilities to the severity of the myopathy, based on physical measurements during the post-hatch growth period with the potential development of an economic model to simultaneously optimise bird’s welfare and the economic return of poultry operations.