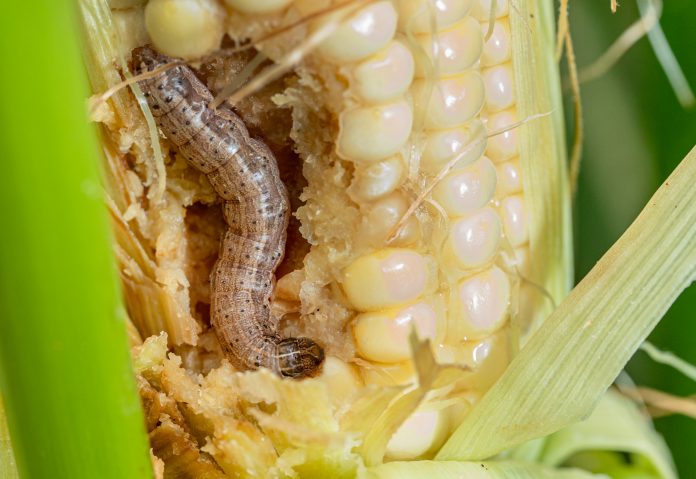 In this African and Asian agriculture for 2021 focus, options for managing fall armyworm (Spodoptera frugiperda) in maize and sorghum are discussed by experts in the field Richard E. Goodman and Joseph E. Huesing

Native to the Americas, the Fall Armyworm (FAW; Spodoptera frugiperda J.E. Smith, 1797) was discovered as a new invasive pest in West Africa during 2016. How and exactly when the pest was introduced is unknown, but genetic analysis suggests the point of origin was somewhere in the Caribbean. There are at least two genetic populations of the FAW moth, one consuming maize and sorghum, the other consuming primarily rice. Both consume other plants as well. It appears that the strain introduced into Sub-Saharan Africa is the maize strain. The FAW moths are capable of flying on wind currents as far as 1,500 km and by 2018, FAW had spread across Sub-Saharan Africa, the Middle East and Asia reaching China, Japan and Australia. The FAW is now endemic across most tropical regions of the world.

Food and feed production is challenging in most developing countries with shrinking resources of water, farmland and farm workers and with growing urban populations. Farm production losses are growing due to new invasive insect pests, diseases and weeds. Some fungal diseases are vectored by insect pests such as FAW resulting in mycotoxin contamination that can cause disease in humans and animals. Maize and sorghum are the major food and feed crops in much of Africa and Asia and the introduction of the FAW will make production more challenging.

In the Americas, farmers of all socioeconomic levels have developed effective means of controlling FAW over the past 100 years. By the 1920s, the U.S. Department of Agriculture (USDA) published manuals for farmers outlining control measures for FAW. During the past 20 years, farmers in the Americas have used agroecological approaches, resistant plant varieties, including genetically modified (GM) maize and pesticides to reduce losses from this aggressive pest.

How can FAW be controlled in Africa and Asia? Fortunately, there is a solution based on Good Agricultural Practices (GAP) coupled with Integrated Pest Management (IPM). Following the discovery of FAW in Africa in 2016, international development organisations such as USAID, CIMMYT, CABI, the FAO, and the private sector, joined with regional/national governments and partners across Africa and Asia to develop the GAP-IPM strategy specifically to combat FAWs based on three major pillars:

Farmers need the knowledge to grow a good maize crop with an understanding of GAP, including the need for good soil health and fertiliser, management of soil pH and good quality seed. A healthy stand of well-managed maize is better able to withstand pest attacks. In addition, farmers need to have the knowledge of pest management principles for insect pests including FAW, diseases and weeds. However, the best-managed crop can experience intense pest pressure that warrants aggressive management.

Tools include agroecological approaches, laboratory-reared and released parasitic wasps for biocontrol, safer use pesticides, and conventional or genetically modified resistant seed all used in an IPM framework. A farmer might choose one strategy one year and a different strategy the next. The 100 years’ experience in the Americas with FAW has identified different approaches that work well in some circumstances that must be modified in some years.

Host plant resistance (HPR) provides a foundation of IPM for safe and efficient management of FAW. Since the protection goal of maize farming is a high yield of maize grain, it stands to reason that deploying seed with resistance traits to FAW is key to its control. Seed companies and public sector providers, notably the CIMMYT and the USDA have been deploying conventionally bred FAW resistant seed since the 1970s to help maintain yields compared to non-resistant seed. 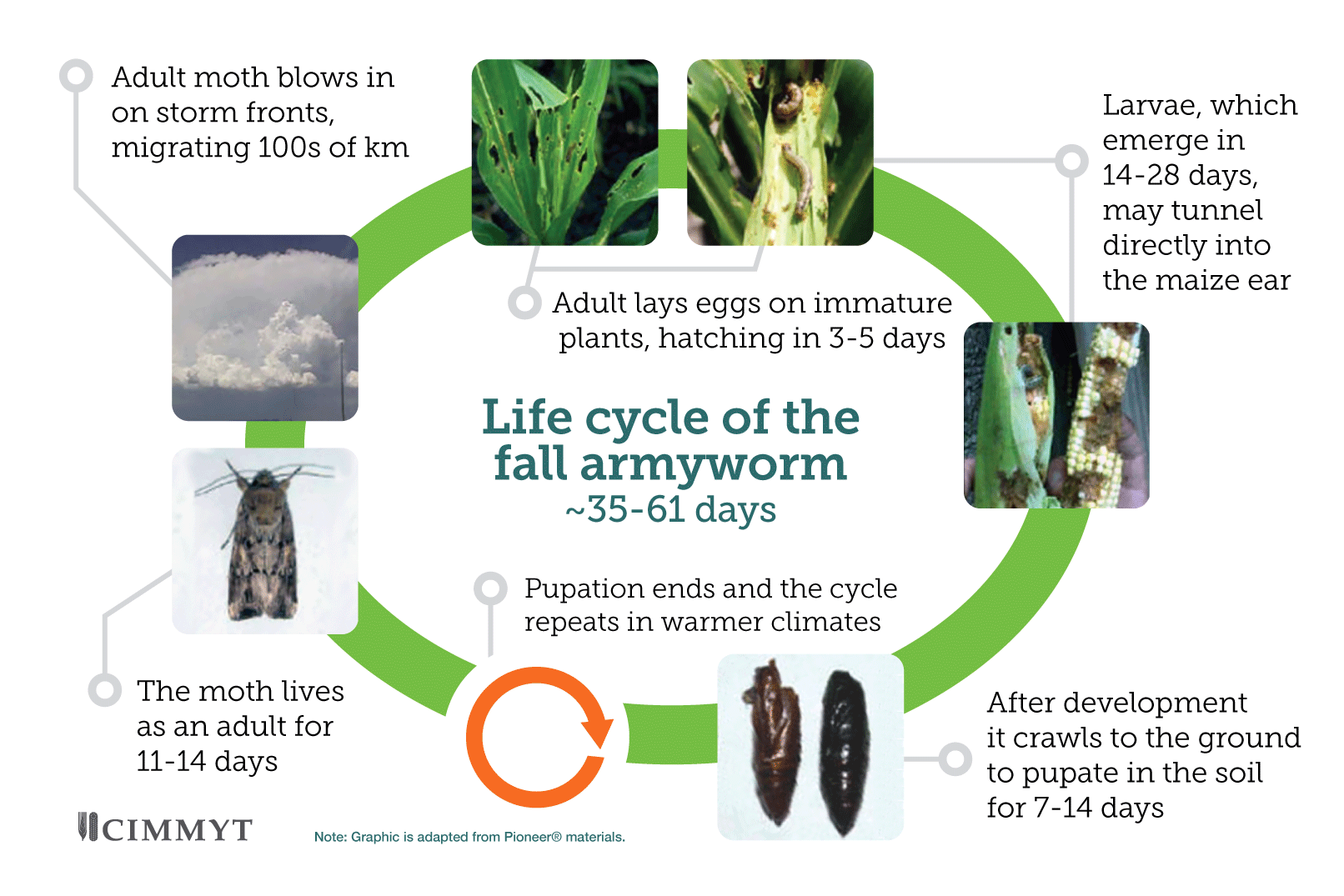 In 1995, farmers were introduced to a new approach to HPR using GM seed. Scientists developed resistant maize seed by introducing genes from the pesticidal bacterium Bacillus thuringiensis (Bt) that are widely used in organic agriculture. Organic Bt sprays are difficult to use effectively as they have to be applied at a time before the FAW enters the maize leaf whorl where it is protected from the spray. However, GM maize expresses low concentrations of one or more Bt proteins throughout the life of the plant, providing near-complete control of FAW. Caterpillars that consume the green GM plant material are stunted or die and toxicity is limited to the caterpillar. People and animals can consume these proteins safely. Farmers are not at risk from toxic chemicals with GM seeds. While farmers pay a bit more for GM seeds, they avoid costs for many pesticides while protecting their crop from serious yield loss. The GM maize approach has been so successful that over 85% of farmers in the Americas use GM Bt-maize for control of FAW and other lepidopteran pests. This approach is environmentally friendly with virtually no negative effects on conservation biocontrol and is among the safest approaches for smallholder farmers. However, just like the use of antibiotics to control diseases, strategies are needed to manage resistance effectively.

Conventional and biopesticides are useful for managing many insect pests. However, broad-spectrum insecticides may kill beneficial insects. Providing safe options for smallholder farmers is difficult because bulk containers intended for larger-scale commercial applications are not affordable. Yet companies are adapting to provide farmers with backpack sprayer doses that are affordable. The key to helping smallholder farmers economically manage their farms is better training in early detection of FAW and proper use of damage assessment criteria to treat with pesticides only when economically feasible and with the correct product and rate. Training must be provided through extension agents or companies since farmers have limited electronic access (the internet, computers) for instruction.

Conservation biocontrol is a fundamental goal of IPM programmes. The idea is to minimise impacts on natural enemies of pests which can help keep the pest in check much of the time. Minimising the use of broader spectrum pesticides is a key strategy. Insect parasitoids and predators can also be reared in ‘biofactories’ and released into fields using a process called augmentative biocontrol. While such biocontrol has been used to mitigate FAW infestations, it is expensive and complex to implement (de Lourdes Corrêa Figueiredo et al, 2015).

Many agricultural technologies, including seed, agrochemicals and biocontrol agents are regulated by national governments. Strictly speaking, the role of the regulator is to assess the safety of these products and not to determine which products farmers should have access to. Once approved for use, each farmer can assess how best to use these technologies to fit their needs and income level. Importantly, farmers can only choose technologies after regulatory approval. What is not helpful is when access to useful and safe technologies is denied or delayed simply to satisfy the well-intentioned but misguided beliefs of special interest groups. In some cases, trade is disrupted as the technology is denied, based on fears of lack of access to markets. Rational enabling policies are needed to ensure that the best tools for food production, safety and economic well-being of smallholder farmers are made available to them.

Seeds including both conventional and GM varieties, as well as biocontrol agents, synthetic and biopesticides are all regulated materials. All are evaluated for food and feed safety and nutritional equivalence guided by international scientific recommendations. Environmental safety is assured by short-term in-country field trials and by laboratory studies of mammalian and invertebrate organism safety.

GM maize provides the safest and effective means of controlling FAW. Maize transformed with one or more genes from Bacillus thuringiensis provides resistance to FAW in the Americas, South Africa, Vietnam and the Philippines. Countries including Ethiopia, Kenya, Mozambique, Nigeria, Tanzania and Uganda have a mechanism to approve test trials to confirm the efficacy and environmental safety of these varieties. These varieties are already approved for cultivation and use for food and feed in much of the Americas after having undergone rigorous scientific safety evaluations that provide data that is transportable.

The food and feed safety of GM crops is determined following the science-based CODEX Alimentarius Commission Guideline published in 2003, comparing the GM and closest non-GM varieties (CODEX 2003). The evaluation considers possible risks of the introduced proteins for those with existing allergies and celiac disease. It also evaluates natural allergens, toxins and anti-nutrients compared to non-GM varieties. The nutritional properties are evaluated relative to conventional varieties in laboratory tests from field samples. Approved GM crops grown in the U.S., Australia, Canada, Argentina and Brazil are evaluated following the same guidelines. While some countries require assessments far beyond the CODEX guidelines, in the 24 years since GM food crops have been used globally, no approved GM trait has caused new allergies or toxic responses. The Allergen Online website maintained at the University of Nebraska is one of the primary tools for the safety evaluating potential allergenicity and celiac disease (Goodman et al., 2016).

Safety approaches for chemical pesticides are important tools used in controlling pests. Safety guidelines have improved over the past 30 years, and newer, safer pesticides have been developed that are effective in controlling FAW (Jepson et al., 2020). A number of specific pesticides have been classified as safer to use and efficacious for FAW control by smallholder farmers, while some pesticides are defined as high risk for humans, avian or mammalian species, aquatic invertebrates, fish or other key species and should be avoided (Jepson et al., 2020).

In summary, clearly, FAW is a challenge for smallholder farmers in Africa and Asia. The tools described here have been used effectively in the Americas to limit losses to this pest. Similar approaches should work in countries newly experiencing FAW, with the adoption of flexible approaches that fit the policies of each country. Costs, efficacy, safety, and availability are key parameters for success in combating this aggressive pest in all African and Asian countries. 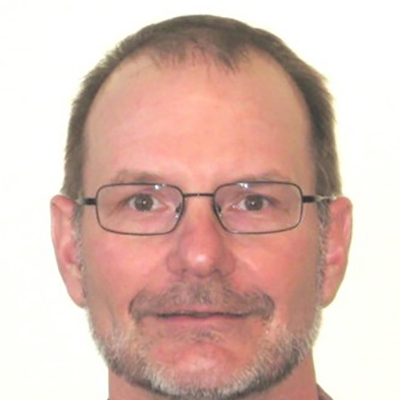 What can the discovery of 4,000 year old ostrich eggs teach...