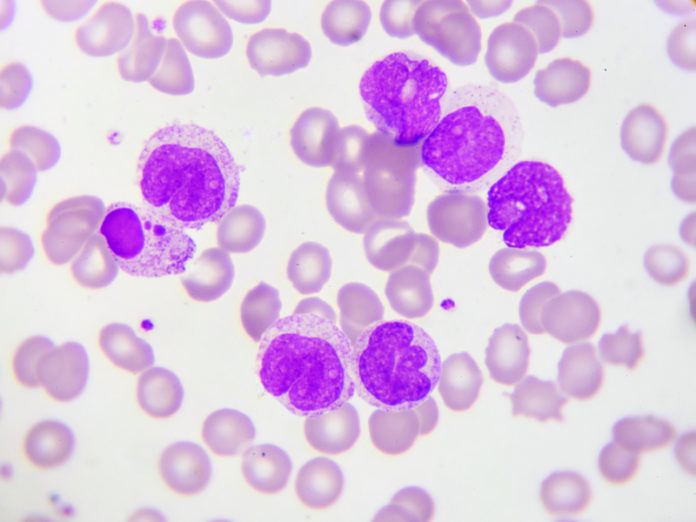 Acute leukaemia results in bone marrow failure, and comprise the two major haematological disease groups, acute lymphoblastic leukaemia (ALL) and acute myeloid leukaemia (AML). Normal bone marrow function is responsible for the maturation of stem cells (hematopoiesis) that give rise to all cellular components of the blood, including cells from myeloid progenitors. Examples of this include red blood cells (carrying oxygen), platelets (prevent bleeding and aid in clotting of blood), white blood cells such as granulocytes and macrophages (fight infections, removal of dead cells), and cells from lymphoid progenitors such as B- and T-lymphocytes (production of antibodies and killing of invading cells).

The failure of the bone marrow due to acute leukaemia often results in anaemia, high fever (night sweat) and prolonged infections that cannot be cured by antibiotics. This is caused by an abnormal expansion of immature leukemic cells, commonly known as blasts that may be of either lymphoid or myeloid origin, which ultimately replaces normal hematopoiesis. Individuals with acute leukaemia that are left untreated usually die within 3 months.

An acute leukaemia is a heterogeneous group of malignant disorders that are not particularly common. Approximately, 250 new cases of AML and 25-35 new cases of ALL are diagnosed annually in Denmark. However, acute leukaemias are set to becoming an increasing health problem as the population ages, mainly because AML is predominantly diagnosed in patients greater than 60-year of age and may also be secondary to previous chemotherapeutic treatment of e.g. breast cancer.

Major advances in diagnostics and classification of acute leukaemias

The last three decades have witnessed major advances in diagnosis and biological understanding of this disease group. Until the 1980s, the diagnosis of acute leukaemias relied largely on morphological assessment and cytochemistry while immunophenotyping (IP) and chromosome analysis were in their infancy. Continued development of IP, chromosome analysis, including cytogenetics and molecular cytogenetics, and molecular genetics, including sequencing as well as targeted mutation analysis, have greatly improved our understanding of the molecular pathogenesis of acute leukemias following the pioneering work of Nowell and Hungerford (1) and later that of Janet Rowley, who established that acute leukemia is a genetic disease (2).

Two leukaemia patients where their leukemic cells appear identical morphologically and by IP the leukemic cells from each of the two patients may harbour different chromosomal or molecular genetic profiles, that would cause an important variation in response to prescribed contemporary therapies exemplify this.

The most recent high-through put molecular genetic analyses, such as oligo-based aCGH microarray analysis (3) and next-generation sequencing (4), have further enhanced our pathogenetic understanding of acute leukaemias. Several hundred-specific chromosomal and genetic mutations have been identified until now and we are still counting.

The adoption of WHO classification of hematopoietic neoplasms in 2001, and the subsequent revisions in 2008 and 2016 (5), where diagnosis and classification of subtypes rely on chromosomal and genetic information has had a major impact on diagnostic practice and greatly enhanced treatment outcome.

Impact of chromosomal and/or genetic lesions in leukemic cells

Leukemogenesis requires accumulation of aberrant genomic alterations in the leukemic blasts. Nonrandom (recurrent) chromosomal or genomic abnormalities can be detected in many of the patients with acute leukaemias and are usually acquired early in leukemogenesis. They are often termed driver mutations in which genetic alterations contribute to the pathophysiology of the leukemic cells conferring their survival advantage, by affecting important cellular pathways, which may include dysfunction of genes encoding transcription factors and signalling molecules that delay or block normal hematopoiesis. There are also passenger mutations that are secondary events during leukemogenesis or disease progression. Together these genetic alterations form the basis of prognostic and predictive markers in disease prognostication, as well as emerging targeted therapies.

Targeted agents denote drugs aimed at discrete genetic or phenotypic lesions specific to the leukaemia blasts compared with normal cells. It is known from several clinical trials that targeted therapy is both more effective and less toxic than conventional cytotoxic chemotherapy, which adapts to the “one size fits all” – principle.

Targeted therapy is, however, often more expensive than chemotherapy, because development of targeted drugs requires a great amount of knowledge about e.g. the cellular pathways (i.e. molecular pathogenesis), in which the genetic lesions have an impact.

To detect the critical genetic and phenotypic lesions in a timely manner, it is of great importance that modern haematological diagnostics can provide excellence in morphology and immunocytochemistry, IP, cytogenetic as well as molecular genetic analyses (figure 1). Morphology and immuno­phenotyping are very important for diagnosis, whereas genetic changes are the single most important factor for disease group classification, treatment decision as well as prognosis.

The extensive genetic heterogeneity in acute leukaemias provides a wealth of biomarkers in precision and targeted medicine, but only a few of these known genetic lesions can currently be targeted by precision medicine. This is because it is one thing is to identify novel genetic aberrations and another, to understand their cellular impact and subsequently how this information can be used to development of a targeted drug.

Thus, many questions remain on the clinical utility of these emerging genetic abnormalities and their implication as prognostic markers for disease outcome or predictive markers, for targeted therapies in different treatment settings.

The era of precision medicine in acute leukaemias has just begun, and new diagnostic and therapeutic strategies are yet to be developed and tested.