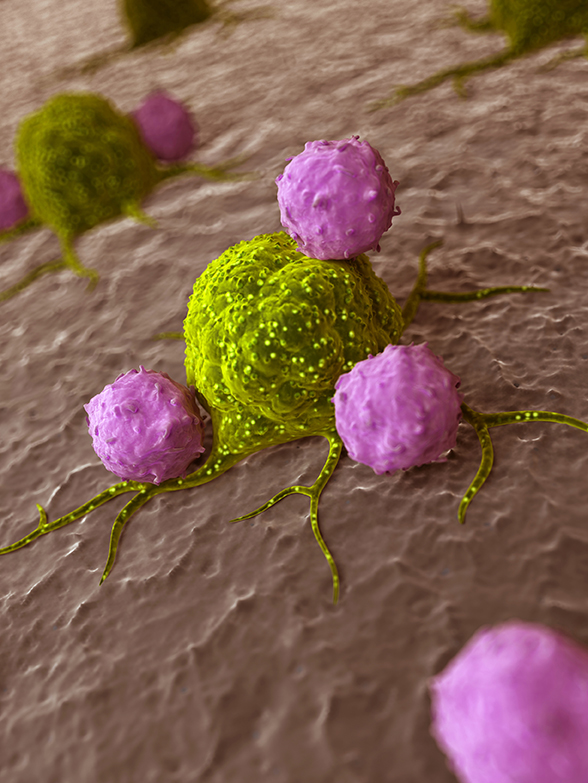 Sumith A Kularatne of On Target Laboratories, LLC highlights cancer immunotherapy as the treatment of the year to target cancer cells

Immunotherapy is starting to play a major role in cancer treatment and it was named as “the breakthrough treatment of the year” in 2013. Cancer immunotherapeutic agents have earned over $60 billion revenues in 2016 and is expected to have a market value of about $80 billion in 2020. Thus, pharmaceutical companies are evaluating new ways to use immunotherapy to treat cancers and develop a wide range of immunotherapeutic drugs for various cancers.

Cancer immunotherapy can be defined as “use of a person’s immune system to fight against cancer either by teaching it to work smart or stimulating the immune system by man-made immune components to attack cancer cells”. It can also be defined as a “treatment for cancer by inducing, enhancing, or suppressing an immune response”. However, the therapeutic outcome of the immunotherapeutic agents highly depends on the type of cancer, type of the immunotherapy, and treatment modality (mono or combination therapy).

Whilst the immune system is supposed to eliminate cancer cells within the body, it is not able to differentiate cancer cells from normal healthy cells. Cancer cells also express CD47 (Cluster of Differentiation 47) as healthy cells do. CD47 is also known as integrin-associated protein (IAP) and it produces a protein named signal-regulatory protein alpha (SIRPα) that sends don’t eat me signals to the macrophages, a type immune cells, and do not activate to attack me signals to T-cells, another type of immune cells. On the other hand, if it recognised that the response might not be strong enough to destroy the cancer cells. Moreover, cancer cells recruit immune cells such as tumour-associated macrophages, a subtype of immune cells, which keep the immune system in check and chase away T-cells that come to attack the cancer cells.

Monoclonal antibodies in the immunotherapeutic sector can be defined as man-made antibodies that induce antibody-dependent cell mediated cytotoxicity (ADCC), by recruiting immune cells or activating the complement system to attack tumour cells. Recruitment of immune cells can also be accomplished by designing a bispecific antibody that has 2 different monoclonal antibodies with one to recognise biomarker on cancer cells and a second to recognise biomarkers on immune cells. Blincyto (Blinatumomab) is a bispecific antibody that is used to treat acute lymphocytic leukaemia or B-cell lymphoma. It binds to the CD19 protein on B-lymphocytes and to CD3 on T cells. By binding to both of these biomarkers, blinatumomab brings T cells closer to cancer cells and eliciting an immune response to diminishing cancer cells. Blincyto was developed by Micromet and then later acquired by Amgen, which has conducted further clinical development and is predicted to generate sales revenues of over $1.5 billion in 2019.

The second class of immunotherapeutic agents is immune checkpoint inhibitors that take the ‘brakes’ off the immune system to attack the cancer cells. The immune system has checkpoint proteins, such as programmed cell death protein 1 (PD-1) and cytotoxic T-lymphocyte-associated protein (CTLA), that help to keep it from attacking other normal cells in the body. Unfortunately, cancer cells take advantage of these checkpoints to avoid being attacked by the immune system. A joint effort by Bristol-Myers Squibb and Ono Pharmaceutical yield to launch blockbuster PD-1 inhibitor, Opdivo (nivolumab), in Japan for melanoma in 2014 and it expects to generate sales revenues of $4.3 billion in 2019. Keytruda (pembrolizumab), PD-1 inhibitor developed by Merck for melanoma, is predicted to generate sales revenues of $2.9 billion in 2019. Yervoy (ipilimumab) is an example of a monoclonal antibody that activates the immune system by targeting CTLA-4, a protein receptor that down-regulates the immune system. While Yervoy was developed by James Allison, clinical development of anti-CTLA4 was initiated by Medarex, which was later acquired by Bristol-Myers Squibb. Industry experts have predicted that Yervoy will generate sales revenues of $1.5 billion in 2019.

Cancer vaccines are made from altered cancer cells that have been removed from the patient during surgery, immune cells that have been isolated from the patient’s blood, or antigen such as protein, peptide or hapten that have been used to boost immune cells. Cancer vaccines can be used as prevention or therapeutic methods for cancer. In the case of cancer cell vaccines, cells are altered chemically in the lab to ensure they are recognised and attacked by the immune system and then injected back into the patient. On the other hand, isolated immune cells from the patient are exposed to cancer cells, cancer antigens, or chemicals to activate and then injected back into the patient, where they should cause an immune response to cancer cells in the body. Sipuleucel-T (Provenge) is a dendritic cell (a type of immune cells) vaccine manufactured by Dendreon and received FDA approval to treat metastatic prostate cancer in 2010. Provenge generated $303.8 million revenue in 2014.

The fourth category can be classified as non-specific immunotherapeutic modalities that boost the immune system in a general way. Chimeric antigen receptor (CAR) T-cell therapy is promising non-specific immuno­therapeutic modality to fight cancer. In this technique, T cells are removed from the patient’s blood and genetically engineered in the lab to express CAR. The T cells are then multiplied in a culture dish and infused back into the patient’s blood. Theoretically, these T-cells should seek out the cancer cells and launch a precise immune attack against them. Juno Therapeutics, Kite Pharma, Novartis, and Cellectis are conducting clinical trials on CAR-T cell therapies for different types of cancers. While some patients have shown promising results with high remission rates, a large number of patients have experienced untoward toxicities due to non-specific nature of this treatment. It’s Obvious that recent deaths in the Juno ROCKET trial are creating uncertainties about CAR-T technology, researchers are currently trying to improve to overcome challenges of current CAR- T cell therapies.

“Every battle is won before it is fought” – Sun Tzu, The Art of War, 400 B.C. That’s how I see cancer immunotherapy.