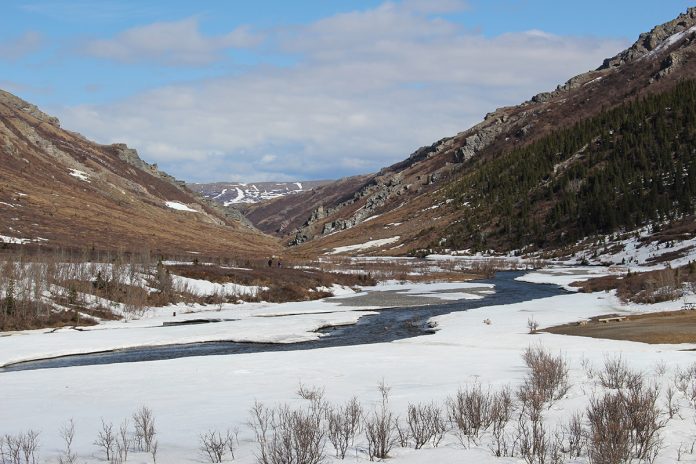 When it comes to the theme of permafrost thaw and the carbon feedback, climate change is indeed at full force in the Arctic. The highest Arctic temperature on record was reported in 2020. These rising temperatures have knock-on effects on Arctic rivers and the permafrost soils that they drain.

Arctic rivers, including the six large Arctic rivers (Ob’, Yenisey, Lena, Mackenzie, Yukon, Kolyma) and their tributaries, are the arteries connecting the permafrost landscape to the Arctic Ocean. Their combined river discharge, calculated by the volume of water in the river and the speed at which the river is travelling, is more than 10% of the world’s river discharge. This makes Arctic rivers the largest supplier of waters to the Arctic Ocean. These rivers have a dynamic seasonal cycle: during the winter months, rivers are covered in ice and often frozen to their base; during a tumultuous period in spring, the river ice breaks up and rivers are fed by snowmelt; and during the summer months waters flow into the river along the surface of unfrozen permafrost soils. Rising temperatures in the Arctic are driving increased precipitation that in turn drives increased river water discharge which can change the amount of material that is transported from permafrost soils to the Arctic Ocean.

The role of mineral elements

The WeThaw team has sampled river and soil waters during peak flow events. In 2018 and 2019, the team ventured to Alaska to collect permafrost and river water samples during river ice break-up and a rain event. The team has established that during these peak events, mineral element-organic carbon colloids can act as a ‘fluvial seismometer’ to monitor the effect of permafrost degradation on organic carbon stabilisation in permafrost soils. Future work should target these crucial and understudied periods where the rapid changes, depicted in the photos below, allow for a direct connection between rivers and permafrost soils.

Webpage of the WeThaw project.