Roxane Feller, Secretary General of AnimalhealthEurope, helps us understand the benefits of animal vaccination for both animals and people

Most people take regular precautions to protect their health and that of their families. By practicing basic hygiene, by avoiding exposure to infection, by going to the doctor for a check-up, or by ensuring your pet has animal vaccination, people see disease prevention as a routine part of their lives. But what do we really know about where diseases come from?

In the last three decades, over 30 new human pathogens have been detected, 75% of which have originated in animals, mostly originating in wildlife. In fact around 60% of the infectious diseases affecting people are caused by zoonotic pathogens, meaning they have an animal source.

It is estimated that around one billion cases of illness and millions of deaths occur every year from zoonoses globally. Some of the most commonly known zoonoses include rabies, avian flu (H5N1, H7N9), SARS (severe acute respiratory syndrome) and MERS (Middle East respiratory syndrome coronavirus), and now COVID-19.

Some zoonotic illnesses can also be spread through food consumption, underlining both the importance of good animal health as well as upholding good food handling, hygiene, storage and preparation standards. Some illnesses can be spread via close contact with animals, or between wildlife and domestic animals, bringing it to the general public.

An important measure taken to prevent diseases in both animals and people is vaccination. As with people, vaccines protect animals before they become ill, minimising their suffering, but they can also protect us from illness. Some zoonotic pathogens, like salmonella, may not cause serious health issues in poultry for example, but by encouraging salmonella vaccination in poultry in the early 2000s in Europe, this proved to be an effective measure in tackling the disease occurrence in people. Thanks to EU-coordinated awareness programmes with poultry vaccination as a key element, there was an almost 50% drop in cases in the first decade of the 2000s.

Animal vaccinations are efficient tools for protecting animal health and welfare, protecting public health, and also for reducing the need to treat animals with medicines. The question remains as to how often and for what reasons preventive vaccines should be used in farm animals.

The financial cost of infectious diseases carried by animals

Foot and Mouth Disease (FMD) alone for example is estimated to cost up to $21 billion annually in countries where the disease is prevalent, even though an effective vaccine exists. And even though FMD has little effect on public health, nobody can ignore the economic impacts or forget the widespread culling of animals during the 2001 UK FMD outbreak when over 6 million animals were slaughtered.

Decisions to vaccinate farmed animals for specific diseases at specific times clearly require more thoughtful discussion at all levels as, with the growing public interest in animal welfare, society will no longer accept the culling of millions of animals due to preventable diseases.

And in cases of animal disease outbreaks, for which no vaccine exists yet or is still in development, like with African Swine Fever, there is a clear need for greater investment in research and development alongside fast-track approvals. Poland identified its first case of African Swine Fever (ASF) in 2014, and has witnessed outbreaks of ASF on more than 410 domestic pig farms by Q4 of 2021, resulting in huge economic losses and the culling of thousands of wild board and domestic pigs.

Fast-track vaccine development as a solution

Fast-track vaccine development has been a fundamental success story in preventing and controlling infectious diseases in people with the recent COVID pandemic. But it has also previously been successful for farm animals, such as for the suppression of the Schmallenberg virus after it first emerged in cattle and sheep in 2011. Learning from the rapid development of Schmallenberg vaccines, we know that facilitating vaccine development and animal vaccination by optimising existing regulatory tools greatly contributes to improved preparedness and prevention.

It is clear that prioritising preventive health care is a practice that should apply to animals as well as people. By ensuring practices that prevent animals from becoming ill, we can avoid animal suffering and premature deaths, and stop transmission to other animals, and people.

What is also clear is that when it comes to infectious diseases that can pass between animal species, or where the pathogens carried by animals cause disease in people, veterinary vaccines play a central role in breaking the cycle of transmission. For this reason, continuing to work together with authorities to ensure better surveillance for identifying, and better preparedness for controlling diseases in the domestic animal and wildlife reservoir is a priority for our future health. 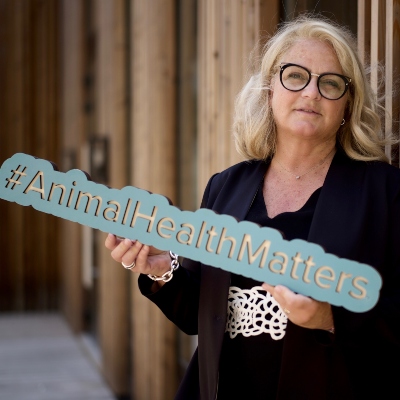