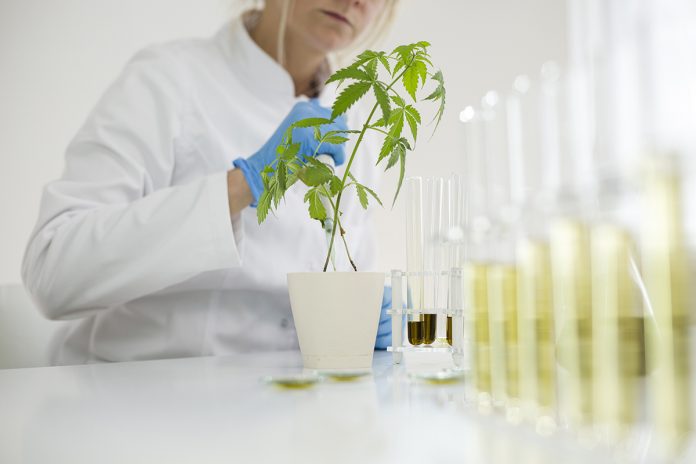 In the fourth of a series of five articles, Oxford Cannabinoid Technologies discuss their expertise on cannabinoids in medicine

Following the previous articles where we discussed the treatment of cancer, pain, psoriasis and rheumatoid arthritis, this fourth piece focuses on the use of cannabinoids to treat epilepsy.

Epilepsy is a clinically-significant neurological condition that is diagnosed upon evidence of: at least two unprovoked seizures occurring less than 24 hours apart; one unprovoked seizure and a probability for further seizures of at least 60% occurring over the next 10 years; or an epilepsy syndrome1. Between 70-80% of epilepsy patients achieve complete seizure control using anti-epileptic drugs2. However, 20-30% of epilepsy patients are drug resistant3 and do not achieve sustained freedom from seizures using common anti-epileptic drug4. For these drug-resistant patients, the efficacy of alternative and adjunctive therapies is of significant interest.

Pre-clinical studies have shown that naturally occurring cannabinoids (phytocannabinoids) have anticonvulsant effects, that are mediated by the endocannabinoid system5, with cannabidiol (CBD) demonstrating anti-seizure effects in both in vivo and in vitro models6. In June 2018, the FDA approved GW Pharma’s Epidiolex (cannabidiol) CBD oral solution for the treatment of seizures associated with two rare and severe forms of epilepsy, Lennox-Gastaut syndrome and Dravet syndrome, in patients older than two years of age7. Epidiolex is the first FDA-approved drug that contains the purified substance derived from cannabis; and it is also the first FDA approval of a drug for the treatment of patients with Dravet syndrome. 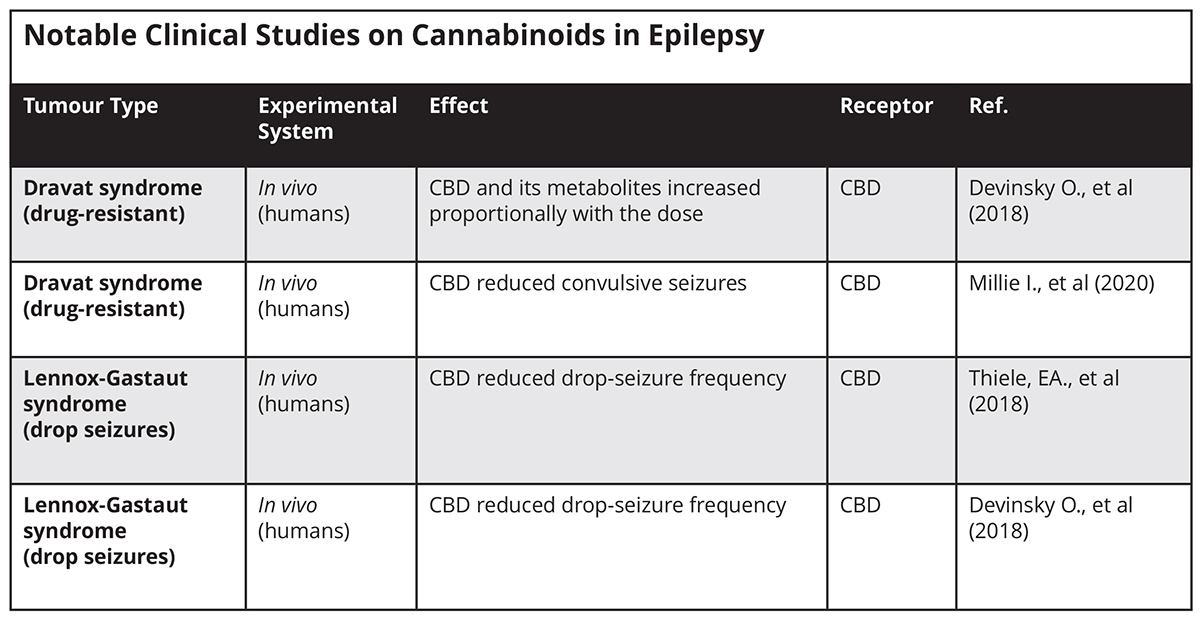 A placebo-controlled study to evaluate the safety and preliminary pharmacokinetics of CBD in 34 children with Dravet syndrome was published in Neurology in 2018. The results showed exposure to CBD and its metabolites increased proportionally with dose. An interaction with the anti-epileptic drug, colbazam, was observed. CBD resulted in more adverse events than placebo but was generally well tolerated8.

A double-blind placebo-controlled study, published in Lancet in 2018, investigated the efficacy and safety of CBD added to a regimen of conventional and anti-epileptic medication to treat seizures in 171 patients with treatment-resistant Lennox-Gastaut syndrome (LGS). The medium percentage reduction in monthly drop-seizure frequency from baseline was 43.9% in the CBD group versus 21.8% in the placebo group9.

A double-blind, placebo-controlled trial, published by N Engl J Med in 2018, investigated the efficacy and safety of CBD when added to a regimen of antiepileptic medication in patients with LGS. During a 28-day baseline period, 76 patients that had been assigned 20 mg displayed a 41.9% reduction in seizure frequency; compared to 37.5% in the 73 patients taking 10 mg, and 17.2% in the 76 patients in the placebo group10.

A double-blinded, placebo-controlled, randomised clinical trial, published in JAMA Neurology in March 2020, investigated the safety and efficacy of the administration of 10 and 20 mg/kg/d CBD vs a placebo in 198 patients with LGS. There was a 48.7% reduction from baseline in convulsive seizures for the patients taking 10 mg, compared to 45.7% in patients taking 20 mg and 26.9% for those taking the placebo11.

CBD has been found to produce anticonvulsant effects in both in vivo and in vitro models12. The precise mechanism of action of its anticonvulsant effect is unknown, although at least part of this effect is believed to be through CBD’s interaction with ion channels that regulate Ca2+ homeostasis. One such ion channel is transient receptor potential cation channel subfamily V member 1 (TRPV1). TRPV1 belongs to the transient receptor potential (TRP) family of ion channels. TRP channels modulate calcium ion entry and mediate neuron signal processes including pressure, temperature and pain perception. TRPV1 is expressed in the hippocampus and its activation is suggested to participate in epilepsy13. CBD activates TRPV1 and causes desensitization of the ion channel. This desensitisation of TRPV1 appears to be involved in reduction of neuronal hyperactivity in epilepsy14.

It is possible that CBD inhibits seizure spread in the CNS by the action of gamma aminobutyric acid (GABA). GABA is an inhibitory neurotransmitter that counterbalances neural excitation, and when the balance is altered, seizures can occur15. Across the brain, CBD has been found to facilitate GABA and glutamine neurotransmission through agonism at the TRVP1 receptor, as well as increasing GABA transmission by antagonism at G protein-coupled receptor 55 (GPR55)16. GPR55 is a novel cannabinoid receptor that triggers release of intracellular Ca2+ when activated17. Antagonising GPR55 with CBD may reduce neural hyper-excitability and can be a promising target for the management of epilepsy.

Additional anti-convulsant activity may be conferred by combining CBD with clobazam, a first-line medication for treating epilepsy. Preclinical research has explored the pharmacodynamic and pharmacokinetic interactions between CBD and clobazam. CBD was found to inhibit the metabolism of clobazam and its active metabolite, N-desmethylclobazam (N-CLB)18. When an anticonvulsant dose of CBD was used, the co-treatment of CBD and clobazam had greater anticonvulsant efficacy than either drug used alone19.

A number of studies have provided evidence that CBD can be used as an effective treatment for epilepsy, and research has shown that taking CBD can reduce seizures by over 50%, with some patients even becoming seizure free. Most studies have looked as CBD as an ‘add on’ to current epileptic medications, therefore the effects on CBD when taken by itself warrants further study. Neurology, with focus on epilepsy, remains a key focus area for Oxford Cannabinoid Technologies, and we look forward to sharing additional findings from these studies in the future.