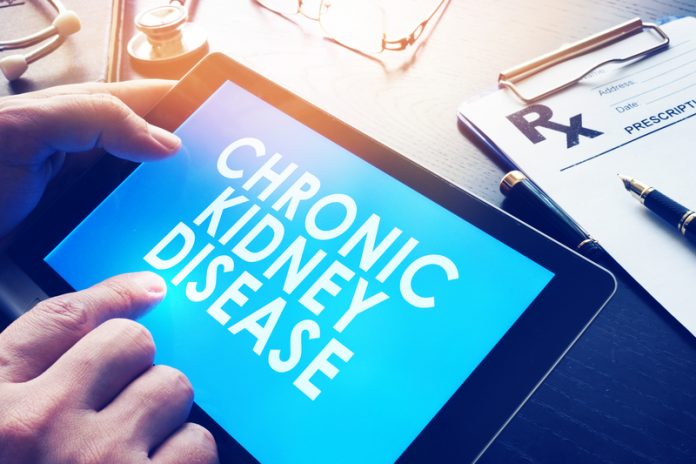 According to The National Institute of Diabetes and Digestive and Kidney Diseases Health Information Center, in the US alone, approximately 30 million adults are estimated to have chronic kidney disease (CKD), a condition in which the kidneys result damaged and cannot filter blood efficiently. Hence, excess fluid and waste from the blood remain within the body leading to a broad spectrum of health problems. Remarkably, around 48% of people exhibiting a severely reduced kidney function but not on dialysis are not aware of having CKD. Indeed, 96% people with kidney damage or mildly reduced kidney function are not aware of having CKD.

In Europe, statistics from the European Renal Association and the European Dialysis and Transplant Association (ERA-EDTA), exhibit that 10% of the population is affected by CKD. More dramatically, around 70 million Europeans have lost some of their kidney functions and hold a high risk of becoming dependent on renal replacement therapies such as dialysis or transplantation.

Among the principal risk factors for developing CKD, adults with diabetes, high blood pressure, heart disease, obesity, metabolic syndrome, in addition to genetic predisposition, hold a higher risk of developing CKD (Obrador et al., 2017). However, many patients have been diagnosed without such health antecedents. Membranous nephropathy (MN) represents an exceptional glomerular lesion that is the most common cause of idiopathic nephrotic syndrome (INS) in non-diabetic adults. Even though accepted treatment regimens include steroids/cyclophosphamide, calcineurin inhibitors and B cell depletion, the road ahead an efficient treatment that remarkable improve the renal function is still poor.

While not included among the most hazardous health problems, CKD is becoming epidemiologically and economically remarkable due to its increasing prevalence. The annual costs incurred for a dialysis patient in Europe are estimated over €80,000 while totalling around $95,000 in the US. The European Kidney Health Alliance (EKHA) also warns about CKD. Indeed, the treatment of CKD and of end-stage renal disease (ESRD) entails extensive societal costs. Expenditure is even higher when considering in-hospital hemodialysis waiting for renal replacement therapy (RRT) in the equation. An alternative, less expensive forms of RRT such as peritoneal dialysis and home hemodialysis are gaining attention to alleviate financial pressure. However, costs for CKD should also include non-renal healthcare costs associated with other risks or complications that patients with CKD must deal with (Vanholder et al., 2017).

MicroRNAs as biomarkers in CKD Biomarkers constitute the battle horse in disease diagnostics and in fact, can successfully help to diagnose CKD at early stages using microRNAs. MicroRNAs are present, in a highly stable form and readily quantifiable amount, in tissues and body fluids, such as urine.

MicroRNAs have prevalent significance as regulators in the kidney. Therefore, urinary microRNAs characteristically released from the nephron in abundant quantities strongly reflect the status of the kidney through the altered microRNA expression in the kidney. MicroRNAs can also be released into the lumen by different cells in specific regions of the nephron, therefore allowing identifying several pathological states, as well as, informing about risk and response to specific therapies (Wonnacott et al., 2017). These biomarkers are commended as novel tools to become the personalised management of renal diseases a reality.

Blocking peptides and molecular mimicry as treatment for CKD

Blocking peptides, also called protein mimotopes, represent small therapeutic peptides capable of preventing protein-protein interactions due to the selective mimicking of native binding domains. This technology is very inexpensive and significantly facilitates the simple design and production of therapeutic agents based on blocking peptides at large scale, thus accelerating trials in both in vitro and in vivo experimental disease models (Havasi et al., 2017).

As an ideal peptide target because of its capability to rapidly filter and absorb small molecules, the kidneys and more precisely, tubular epithelial cells, are perfectly suited to advance the therapeutic road in this direction. Blocking peptides are also attractive due to their advantages in comparison with conventional therapies. The half-life of peptides is extended in the glomerulus compared with the bloodstream, so that, therapeutic agents capable of penetrating the glomerular matrix are more suitable for treating a broader spectrum of renal diseases, including ischemia, membranous nephropathy, focal and segmental glomerulosclerosis and renal cell carcinoma, among others. This growing reagent class of drug candidates also comes with ease of administration, high binding affinity and minimal adverse side-effects.

Medical advances and paradigm change in the treatment of MN

The role of PLA2R antibody in treatment of MN Membranous nephropathy (MN) is one of the leading causes of nephrotic syndrome in adults. Alkylating agents such as cyclophosphamide or chlorambucil alone or in combination with steroids are known to achieve remission of nephrotic syndrome more effectively than conventional approaches in the treatment of MN (Ronco, 2017).

However, the risk of myelotoxicity, infections and even cancer is still concerning. Calcineurin inhibitors, on the other hand, can restore proteinuria but are nephrotoxic. Therefore, the advent of nephritogenic autoantibodies against podocyte M-type phospholipase A2 receptor (PLA2R) and thrombospondin type-1 domain-containing protein 7A (THSD7A) antigens are stipulated to deliver a radical pathophysiological rationale for interventions specifically targeting B-cell lineages and hence prevent antibody production and subepithelial deposition (Couser, 2017).

The most common medication known using this approach is the anti-CD20 monoclonal antibody rituximab, which has been supposed to safely achieve remission of proteinuria in approximately two-thirds of patients with MN. An integrated evaluation of serology and proteinuria can be used to match patients and treatment protocols using an individually tailored approach based on PLA2R-related disease (Cattran and Brenchley, 2017).

In these cases, remission can be predicted by anti-PLA2R antibody depletion, while relapse can be foreseen by antibody re-emergence into the circulation. Consequently, companion diagnostics appear beyond the promise through B-cell modulation and plasma cell-targeted therapy in anti-CD20 resistant forms of the disease, thus leading to a new therapeutic paradigm for patients suffering from MN.

The present status of CKD still reflects a crucial need for a fundamental improvement in several areas of attention. An in-depth understanding of the genetic and environmental causes of CKD and associated pathologies is essential. On the other hand, public health goals in terms of programmes and network assistance are also indispensable to guarantee a healthy, active population, involving public and private stakeholders to enhance both research and clinical outcomes.

More consistent and sustainable approaches focusing on prevention instead of treatment are critical. Primary prevention fundamentally involves lifestyle changes attempting to derive in a healthy, active and long-lived population. Secondary prevention is focused on the prevention of many other related chronic diseases, such as diabetes mellitus, hypertension, cardiovascular disease, liver disease, cancer and pulmonary disorders.

5 Ronco, P., 2017. The Role of PLA2R Antibody in Treatment of Membranous Nephropathy.