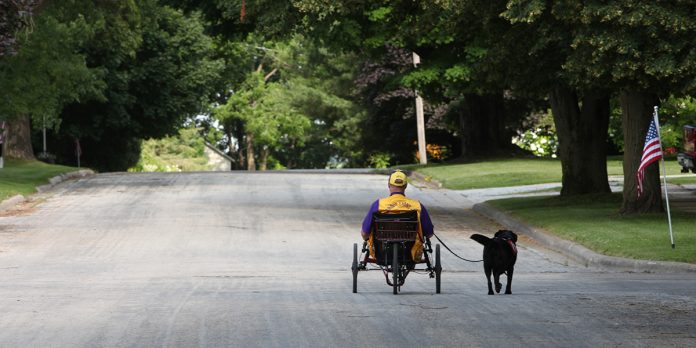 Every few months, Minnesota Lion Lu Ommen found himself in the company of an ambulance crew. He had gone into life-threatening diabetic shock, with his blood sugar low enough to cause a dangerous seizure.

But as much as he came to like the 911 responders, Ommen has not seen them for a while. He thanks Gilbert and the Lions Clubs International for that. Gilbert, a 62-pound Black Labrador Retriever became Ommen’s 24-7 companion four years ago. Where Ommen goes – the golf course, his Harmony Lions Club meeting where he is now president, the pickleball court, to church, or to bed – his diabetes service dog goes too.

When Ommen’s blood sugar is too low or too high – under 100 or over 140 – Gilbert alerts him by tapping him with his paw. “The more out of whack it is, the more aggressively he taps,” says Ommen. “If I really get out of whack, he might bark.” 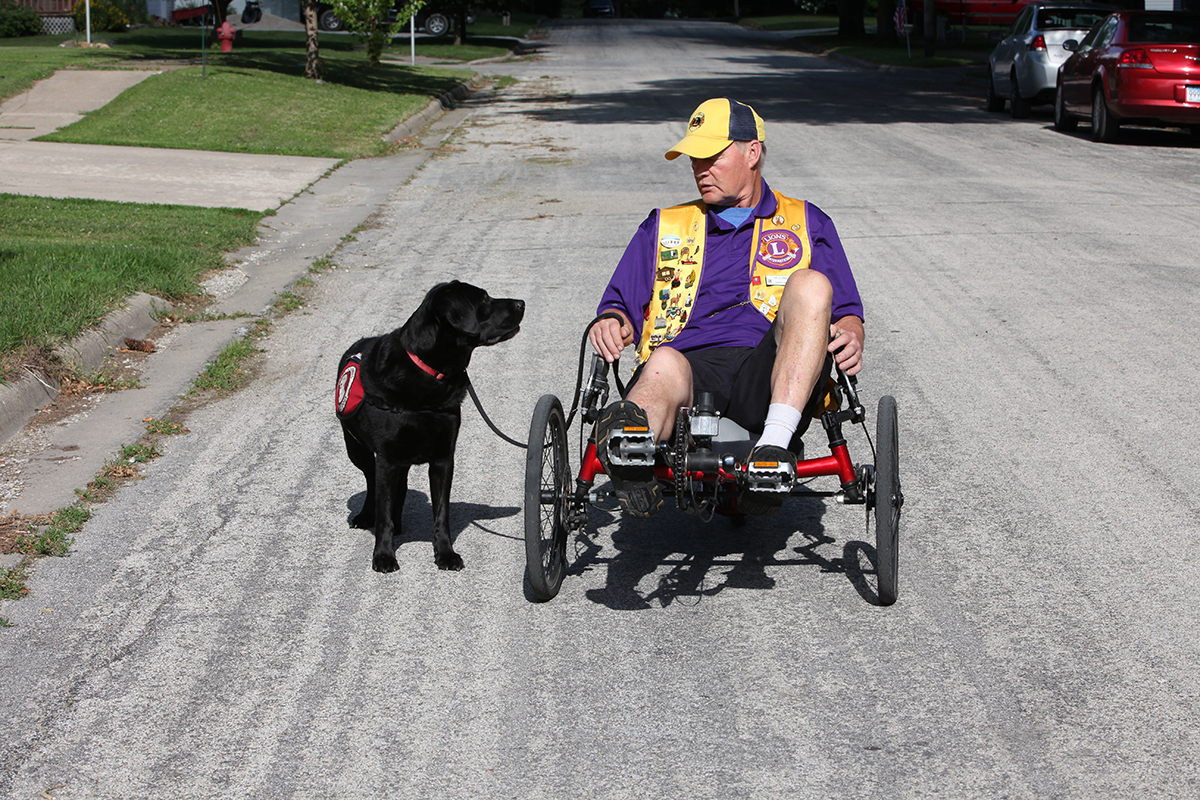 On occasions, Gilbert has also alerted Ommen’s companions of blood sugar concerns when he’s been around them, catching the signs on their breath and then tapping them with his paw. “What he does, he can do to anybody,” says Ommen. “He’s a great dog.”

Gilbert, six, came to Lu and Sue Ommen from Can Do Canines, a Lions-supported non-profit outside Minneapolis that, since 1989, has provided more than 600 service dogs free of charge to people in Minnesota and nearby Wisconsin. He is trained to monitor his human partner’s breath, both night and day.

Lion Alan Peters, the organisation’s founder and executive director explains that the change in blood sugar starts in a person’s stomach and creates a particular smell on their breath. Although it is impossible for humans to detect, it is clear to the sensitive nose of a trained dog.

Peters is also a diabetic, having discovered it by checking his own blood while volunteering at a Lions’ glucose screening event.

Dogs like Gilbert were unheard of when he began the organisation, but they are now in high demand. Can Do Canines have a waiting list of 184 people and have partnered 42 dogs with diabetics. The other dogs among the 600-plus serve as hearing assistants, mobility dogs, seizure and autism service dogs.

Often, the people most in need of a service dog are the ones who can’t afford them, says Peters. Each service dog costs the organisation about $25,000 from birth to age two, when they are typically introduced to their owner, and that’s where the support of Lions in Multiple District 5M has helped.

“They are our biggest single supporter. We see a lot of value in them, and it’s not just because of the money. Lions are more likely to know the needs in their community.”

With $75,000 in donations from individual clubs and a $75,000 Lions Club International Foundation grant, Can Do Canines was also able to add 10 kennels to their facility.

Gilbert might recall those kennels on a visit, but now he sleeps next to the Ommens’ bed, responsibly waking at night to check his partner’s breath.

“I keep a pretty close eye on him,” says Ommen. If Gilbert could talk, he would say the same.