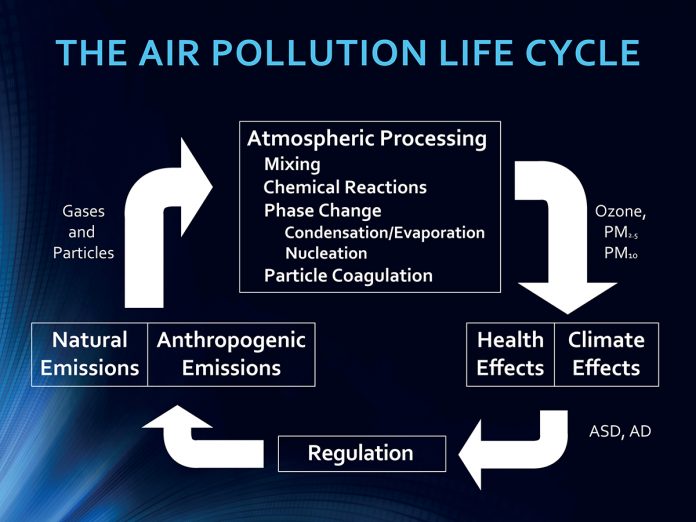 Anthony S. Wexler and Pamela J. Lein from the University of California share their expert views on the impacts of air pollution on the brain

Air pollution is a complex mixture of gases and particles in the atmosphere. Air pollutants are defined as compounds known to be deleterious to human health and welfare. In the United States, air pollutants are categorised as criteria and hazardous pollutants. The criteria pollutants generally derive from combustion processes in motor vehicles, electric generating stations and industrial processes.

Criteria gases include carbon monoxide (CO), sulphur dioxide (SO2), nitrogen dioxide (NO2) and ozone (O3); criteria particles are denoted by their size range, with PM10 and PM2.5 denoting the mass concentration of particles smaller than 10 micrometres (millionths of a metre) or 2.5 micrometres, respectively. Hazardous air pollutants are toxic chemicals, for example, benzene and arsenic.

In a comprehensive review of the worldwide disease burden of pollution, recently published by The Lancet (“The Lancet Commission on Pollution and Health”, published online October 19, 2017, www.thelancet.com), air pollution was identified as the predominant cause of pollution-associated morbidity and mortality. While the link between air pollution and respiratory and cardiovascular disease is well-established, more recent studies have raised concerns about the potential impact of air pollution on the brain, particularly the developing and the aging brain.

Air pollution and especially traffic-related air pollution have been associated with increased risk of neuro- degenerative disease, in particular, Alzheimer’s disease (AD) and diverse neurodevelopmental disorders, including autism spectrum disorder (ASD), attention deficit hyperreactivity disorder (ADHD), learning and intellectual disabilities and schizophrenia. These conditions exact a tremendous cost on the affected individual, their families and society motivating support for research that determines whether these associations are causal and if so, what components in air pollution are responsible and what individual factors (gender, age, nutritional status, genetic makeup, etc.) determine whether exposure to air pollution will result in neurological disease?

Researchers employ two complementary disciplines – epidemiology and toxicology – to study possible links between air pollution and health. Epidemiologic studies use statistics to test the strength of correlations between increased exposure to a given pollutant and higher incidence of disease. Epidemiologic studies can identify associations in the human population; however, they have a key weakness, often summarised as “correlation does not establish causation”.

Let us take for example living near heavily trafficked roadways, which has been associated with an increased incidence of ASD and AD. Is the effect due to the higher concentration of air pollutants near the roadway or due to the higher level of noise and vibration, or because housing is less expensive near busy roadways so people with lower incomes and possibly poor diet live near these roadways? And even if air pollution is the cause, which pollutant(s) cause the effect?

Toxicology is a tool for unravelling these complex questions. To assess the health impact of air pollution, toxicologists use models ranging from cell cultures to laboratory animals and these can be engineered to express known human genetic susceptibilities to disease. In contrast to epidemiology, in toxicology, exposures can be controlled, and extraneous factors can be eliminated as variables, such as noise or diet in the near-roadway example above. In this way, toxicologists can determine if air pollutants cause an adverse health effect.

But toxicology faces the challenge of accurately mimicking human exposures. Think about the complexities of near-roadway air pollution, which is composed of incomplete combustion exhaust, brake wear, tire wear and road wear as well as derived from a mix of vehicles ranging from motorcycles to heavy duty trucks. At the University of California, Davis, we are addressing this challenge by locating animal exposure facilities adjacent to heavy traffic, so that the animals breathe the same mixture as people who live near busy roadways. In addition to assessing neurological outcomes in these animals, we are characterising the chemical composition of the air so future studies can assess the health effect of individual components within the polluted air to identify the disease-causing pollutant(s).

Why are we focusing on the near roadway example? While regulations promulgated to reduce emissions have significantly improved air quality in cities across North America and Western Europe, improved air quality in geographic locations close to sources of air pollution, such as roadways, power plants and industrial facilities, have lagged behind. People living in these locations have a higher incidence of disease, including neurological disease. Since individuals in lower socioeconomic strata are more likely to reside in more highly polluted neighbourhoods, the problem of near-source air pollution exposure is not just a public health issue, but also an environmental justice issue.

In conclusion, epidemiologic studies have identified a number of neurological diseases associated with air pollution. But questions still remain: Is the association causal or is there another intervening factor that underlies the observed association? What are the cellular and molecular mechanisms linking air pollution exposure to neuropathology? What components of the air pollution are causing neurological disease – Gases? Particles? Which ones? And what are the sources of neurotoxic air pollution? This last question is critically important because it is the sources that can be controlled by regulation. Answers to these questions, which will require toxicology in addition to epidemiology, are required to identify air pollution emissions control measures that effectively minimise neuropathological risks.

Department of Mechanical and Aerospace Engineering

Department of Civil and Environmental