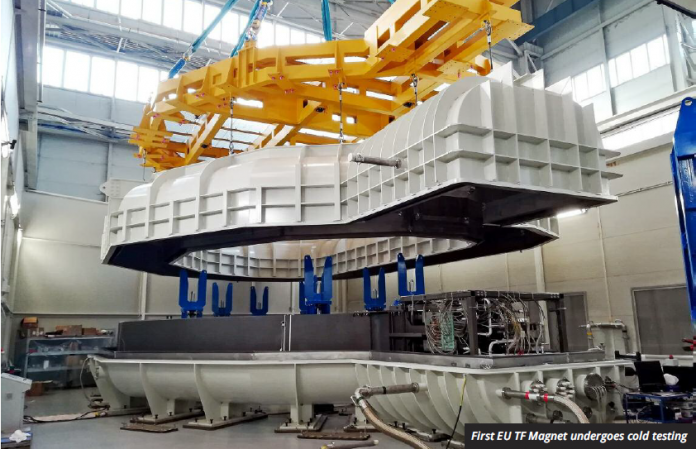 Laban Coblentz, Head of Communication at ITER explains his thoughts on how history is being made when it comes to the exciting world of fusion energy

Last November, the ITER fusion project – 35 countries collaboratively building the most world’s most complex machine – reached the 50% mark in “total construction work scope through First Plasma.” Nearly 800 publications and media outlets in more than 40 countries hailed this milestone. Scientists, government ministers and industry CEOs congratulated each other on the joint progress to date.

Which feature captures the significance of this accomplishment? Is it ITER’s ground-breaking science and engineering? The multinational project management required? The potential impact of fusion energy on society? Perhaps it is a combination of the three?

Part one: The science and engineering

The physics of magnetic confinement fusion is well understood. A few grammes of hydrogen in two forms – deuterium and tritium – are injected into a large, doughnut-shaped vacuum chamber. The hydrogen gas is superheated to form an ionized plasma, its atoms separated into positively charged nuclei and negatively charged electrons. At temperatures approaching 150 million °C, the charged particles are moving fast enough that when they collide, they overcome their natural repulsion and fuse. Adhering to E=mc2, a miniscule portion of mass is converted to a massive release of energy. ITER’s engineering has also been largely validated in past tokamak reactors. Multiple sets of superconducting electromagnets – cylindrical, round, D-shaped and more – create an invisible magnetic cage that confines the charged particles of the plasma away from the metal chamber walls. Only the neutrons, which have no charge, escape the plasma to convert their immense kinetic energy into heat. These behaviours have been demonstrated in smaller machines, as have most of the cryogenics, vacuum systems, robotics and power electronics in the ITER design. 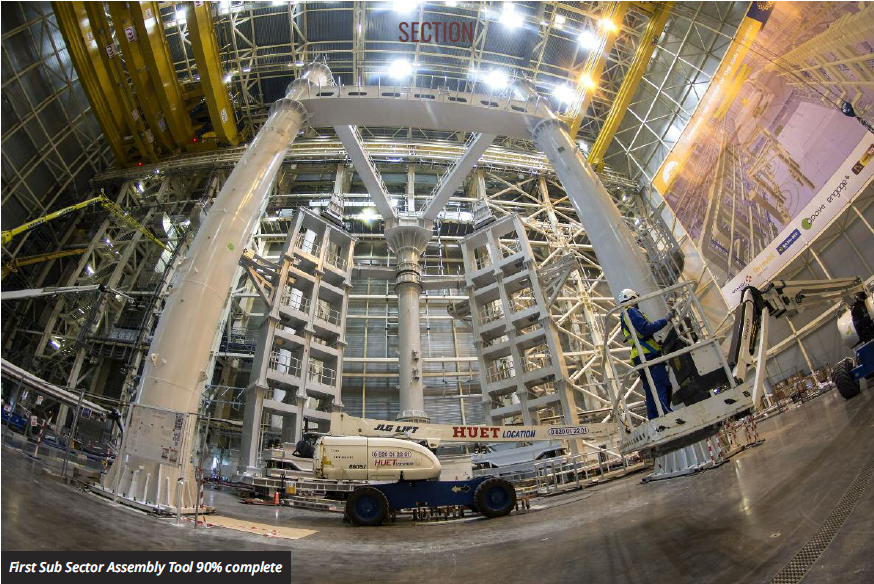 What sets ITER apart is the combination of scale and precision required. Each of ITER’s main magnets weighs several hundred tonnes; some have dimensions as large as 25 metres; yet the intense magnetic fields they generate must be cross-woven so intricately that charged hydrogen nuclei – sized at roughly 10-15 metres – cannot escape. Components so large they must be fabricated in shipyards will be positioned with the delicacy of a watchmaker.

These extremes are driving a host of innovations and firsts, from fabrication techniques to new materials, instrumentation and tools. They are required by ITER’s mission: to demonstrate the feasibility of fusion energy on a commercial scale, by creating for the first time on Earth the conditions necessary for a “burning plasma,” in which the plasma heating is largely self-generated: in brief, to create a star on earth.

As if the complexity of a full-scale tokamak were not demanding enough, the ITER Agreement stipulates that each member will contribute most of its financial support “in-kind,” in the form of hardware. In other words, the million-plus ITER components being manufactured across the globe, in Japanese factories, American laboratories, Indian foundries, Korean industrial plants, Chinese workshops, Russian shipyards, European innovation centres – must be fitted together into a single, functional device: a sort of reverse Tower of Babel that begins with no one speaking the same language, connecting through the common vocabulary of mathematics, physics and three-dimensional CAD drawings.

Yet this is not lunacy. As the ITER Director-General, Bernard Bigot, said recently: “No country or organisation could do this alone. By choosing to build this machine in an integrated way, we have made our success interdependent. Our project is built on this condition: if our partnerships perform well, each partner contributes its expertise, we all learn from each other, the interfaces are well-managed, the project succeeds, and everyone wins.” Multinational project management at ITER – systems engineering, risk management, configuration control – is a herculean effort; but in this crucible, new models for cross-border collaboration are being forged. 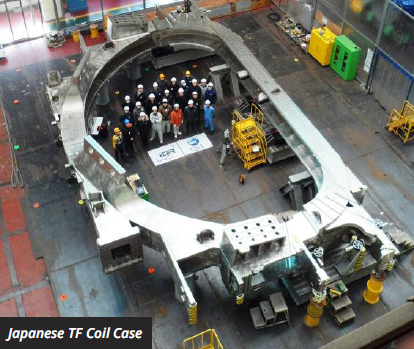 Consider one example: In December 2017, Japan celebrated the completion of ITER’s first toroidal magnet case: at first glance, merely an oddly shaped, giant piece of steel. But the devil is in the details: the 16-meter case, fabricated in sections by Mitsubishi and Hyundai, successfully achieved tolerances of less than 1 millimetre. In January it was shipped to Italy, where a 310-tonne magnet, containing more than 5 kilometres of niobium-tin superconductor manufactured in China,

Europe, Russia and the United States, will fit snugly into the case. When finished, the component will be received at the ITER worksite in southern France, where an 800-tonne, Korean-made assembly tool – standing 10 stories tall, arms outstretched like a mechanical angel’s wings – will cradle it gently, together with a European-made sector of vacuum vessel and a Korean-made ultra-thin silver-plated thermal shield; and will slowly, ponderously merge the pieces together to form a single, unified tokamak section.

To quote Bigot again: “The future of fusion – like the future of science – is partnership.” Almost from its inception, magnetic confinement fusion has been uniquely collaborative. In 1968, when Russian scientists announced that their T-3 Tokamak had achieved plasma temperatures of 10 million degrees, their next action defied precedent: they invited a team from the United Kingdom, their Cold War enemies, to work with them at the Kurchatov Institute to verify and build together on this breakthrough. From that point forward, fusion has been a globally collaborative R&D effort.

This is the genius of ITER: the study of a controlled burning plasma is the convergent next step in the fusion roadmap of every country involved. Gargantuan, audacious, hellishly complex, yet elegant in the simplicity of its civilisation-changing goal: ITER seeks to enable the human animal to harness the power of the heavens. Safe, environmentally friendly and with abundant supplies of fuel available to every country, fusion energy aims to transform the socio-political landscape.

The stakes are high for humankind.