Home Open Access News Transport News How does the UK plan to tackle the pothole headache? 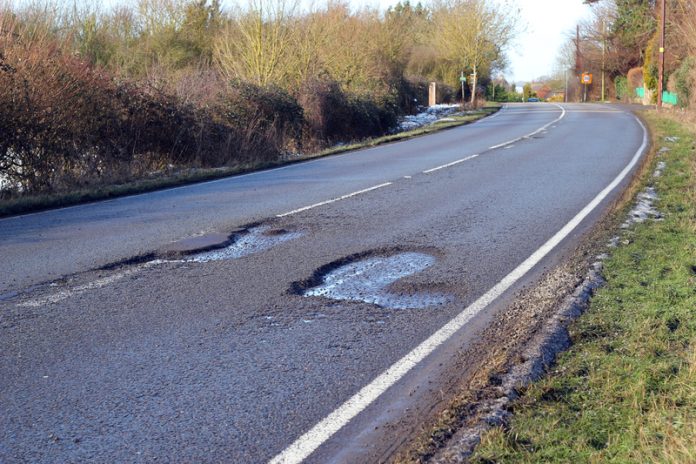 Potholes are an issue that the majority of drivers are familiar with – a headache that doesn’t seem to go away. In the first quarter of 2017, the RAC attended over 6,500 breakdowns caused as a result of potholes – a 63% year-on-year rise in spite of decent weather conditions. These callouts appeared to continue across the entire year.

The RAC further reported that the final three months of 2017 saw the pothole situation worsen again, attending around 11% more callouts attributed to potholes than the previous year. The RAC is concerned that despite the continuously raised concerns about the ongoing pothole issue, the UK’s roads are worsening and we are taking a step backwards.

What is being done about it?

Road infrastructure, maintenance and repairs contribute 25% of the total infrastructure output for the construction industry – only behind electricity. 17% of roads across England are in poor condition, meaning they have less than five years’ residual life remaining.

Highways England are a significant contributor to financing the road infrastructure projects – and the RAC believe long-term funding is critical to tackling the problem in UK road infrastructure. Over a five-year period, beginning in 2015/16, Highways England had a maintenance budget of £1.3 billion. Across the 2017/18 period, estimates reveal expenditure on road maintenance could be billed at around £258 million.

However, it is, in fact, local authorities who have the responsibility to manage 97% of the UK’s road networks – and they remain financially constrained, despite expenditure forecast to reach a peak in 2018/19 of £10.3 billion.

Local councils raised concerns in 2017 that the year could be a ‘tipping point’ for the issue – with analysis by the Local Government Association (LGA) showed the bill for repairing roads in England and Wales could reach £14 billion within two years – a figure that is several times more than the council’s entire annual revenue spending on highways and transport. In 2016, this figure stood at £4.4 billion, clearly not enough to cover the pressing pothole headache.

However, according to the CPA (Construction Products Association), Highways England funding provides higher workloads in the near-term and ensures a gradual increase in funding and investment over the Road Investment Strategy period, rather than the bulk of activity occurring in the later years of the programme.

Moreover, financial incentives to local authorities, mainly in the form of ring-fenced funding, could provide more clarity on roads projects and, in turn, ensure delivery of them over the medium-term. Thankfully, we do have a Pothole Action Fund in place, to which the government have allocated £70 million of the funding, from the £250 million fund, to be used by local highway authorities in 2017/18 to repair 1.3 million potholes.

According to the Road Surface Treatments Association (RSTA), it would cost on average £69 million per council to repair their local road networks. The RSTA believes that £1 billion needs to be injected into a ‘much-needed’ new programme to address the significant backlog of potholes in the UK. They see this being achieved by investing 2p a litre from the existing fuel duty to fix the roads.

Whilst the plans that are in place are a start point to tackling the road infrastructure issue, it is just a small dint in a big task. According to the 2017 Annual Local Authority Road Maintenance Survey, it would cost £12.6 billion and take 14 years to fix the current backlog of pothole repairs. This cost has increased from £11.8 billion, compared to the year previous.