Professor Anna Bogdanova, University of Zurich, explores the relationship between red blood cells and physics, in this in-depth analysis

According to Wikipedia, biophysics is an interdisciplinary science that applies approaches and methods traditionally used in physics to study biological phenomena. Due to their seemingly easy access and handling, red blood cells have been among the first primary human cells that have been biophysically investigated. Nowadays a great variety of laboratory methods regularly applied to red blood cells by biologists and clinicians can be regarded as biophysical methods: patch-clamp, flow cytometry, atomic force spectroscopy, all kinds of microscopy including electron microscopy and scanning microscopy methods, just to name a few. Physicists, in turn, increasingly aim to describe biological objects making extensive use of red blood cells because their composition is in some aspects less complex than of other cells. This approach is often referred to as ‘Biological Physics’.

What is obvious for biologists, many physicists still need to digest, that cells including red blood cells are not constants but variables that change continuously and readily adapt to variable external conditions! Vice versa, for physicists it is obvious that also red blood cells create so-called collective phenomena, i.e. in a group red blood cells behave differently than individual cells, something many biologists need to adapt to.

These examples show the requirement for real interdisciplinary work as carried out in the EU-innovative training network RELEVANCE, where not only biologists, physicists and biophysicists collaborate, they also join forces with clinicians and engineers to progress in the basic understanding of the fascinating red blood cells. The team can then directly apply the obtained knowledge for substantial improvements in societally relevant fields, like diagnostics and therapy of red blood cell-related diseases, in transfusion or sports medicine.

Within the consortium, both classical and very advanced innovative physical approaches are used to analyse red blood cells. For example, we are utilising techniques based on what nature has perfected over billions of years – gravity! It has been found possible to separate a whole population of red blood cells into fractions of young, mature and old cells based on the differences in their density (A). This is done by spinning the cells down the viscose matrix which is dense at the bottom and less dense at the top.

Dense, old or injured red cells move further and band lower within this gradient, whereas young or pathologically swollen cells form a band at the top of it (A). The distribution of red blood cells within the density gradient differs for healthy controls (A: left sample) and patients suffering with rare anaemias (A: right sample). Fractionated young, mature and aged, or malformed and diseased (B, C) red blood cells may be then collected for in-depth investigation. Even small fractions of dense or rigid and unstable cells that are not flexible enough to squeeze through the small capillaries in our body may cause occlusion and damage to our blood vessels.

How high is the risk of such pathologies, how many dehydrated or rigid cells flow in our veins? The prototype of mechanical and chemical modulator under development by Epigem Limited in collaboration with the team from the University of Zürich makes it possible to answer this question. It combines exposure of red blood cells flowing through microfluidic channels to mechanical or chemical stimulation comparable to those they experience in our bloodstream and visualises responses of individual cells to stressors. 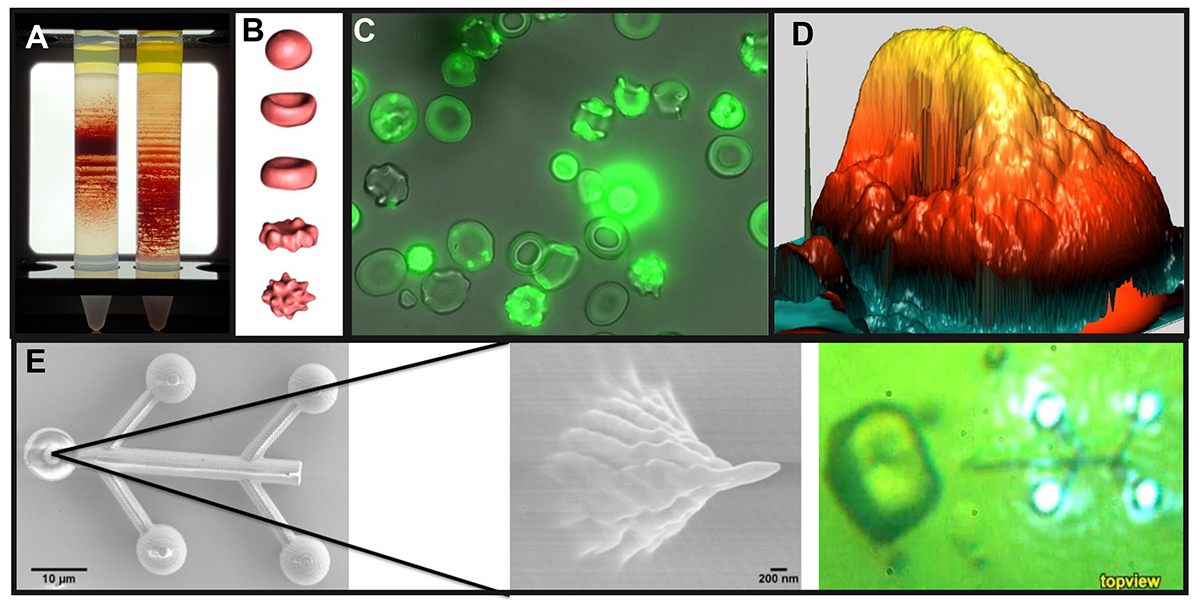 Precise control over electric current makes it possible to visualise the activity of ion channels, special pores with gates formed by proteins incorporated into the cell membrane. An opening of the gate is detected as a burst of electric current through the membrane. One more way to use electricity for detection of red blood cell volume using impedance and fine details of membrane surface architecture is to use scanning ion conductance microscopy that makes a single living red blood cell with its dynamic oscillating membrane look like a gigantic rock (D). Similar pictures were earlier on obtained only for fixed, dead cells, using electron microscopy. Analysis of such images may help to predict the causes of red blood cell membrane instability and analyse aberrations in its structure.

Light-based technologies are extensively used to study red blood cells. Among them are brightfield and fluorescent microscopy (C), and flow cytometry, that are commonly used to visualise gross morphology and localisation of distinct membrane components. Understanding the physics of red blood cell shapes requires high image quality, when possible in 3D, and a great deal of computer modelling (B). Rapidly developing, physics provides biologists with fascinating nanoscale light-based microscopy – now by experts coined ‘optical nanoscopy’ in celebration of the 2014 Nobel Prize in Chemistry that can already today surpass the classical far-field diffraction limit and provide optical resolutions down to a few nanometers.

Light may also be used for picking up red blood cells of our choice, separating them from the rest of the cells and shepherding them to a place where further in-depth investigations with the selected cells will be performed. This selection utilises the gentle catapulting powers of the laser beam as originally demonstrated by the Nobel Prize winner in Physics 2018 Arthur Ashkin at Bell Labs. For red blood cells of patients, that are hypersensitive to light and heat of the laser beam, a special nano-robots manipulated by light may take over injecting, pushing and pulling as well as capturing functions (E). This brand new field of science has been coined Light Robotics and was invented by engineers from the Technical University Denmark and OptoRobotix ApS.

All in all, this is a very interesting time for the expansion of red blood cell knowledge and the further research of these new methods of detection and screening of red blood cells will be of great benefit to society. Such knowledge may only be generated by interdisciplinary teams of researchers that develop a common language, clear for physicists, biologists and clinical haematologists. Joining such teams as RELEVANCE consortium provides optimal conditions for young specialists to grow into the “next generation” of experts.