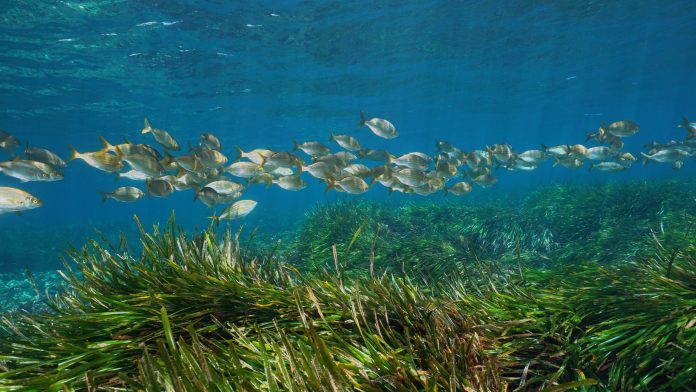 Scientists find that seagrasses continue to produce methane even decades after they die – highlighting the potential for increased methane emissions, if seagrasses are harmed

Additionally, they protect coasts from erosion, sequestering millions of tons of carbon dioxide from the atmosphere every year. However, seagrass meadows also emit the greenhouse gas methane, which has a worse effect on the climate than carbon dioxide.

Seagrasses are a form of terrestrial plant, which form large peat deposits under the sediment surface. Terrestrial peats are known to release large amounts of methane from the decomposition of the organic material. As part of their study, the researchers sampled a dead seagrass meadow.

As seagrass meadows are nearshore habitats, and coastal regions are most dramatically affected by anthropogenic changes, humans are potentially at risk of releasing a lot of methane should we damage and kill seagrasses.

Researchers from the Max Planck Institute for Marine Microbiology and Hydra Marine Sciences evaluated what the methane in the seagrass meadows is formed of. Assuming seagrasses would have the same mechanisms behind methane production to other terrestrial peats, they were proven wrong in their investigations.

They found that seagrasses have numerous compounds, one including betaine, which is a compound that helps seagrasses cope with changes in seawater salinity. As methanogenic archaea can use these compounds directly, methane production in seagrass meadows is highly efficient and robust against environmental stresses.

Another notable difference seen in seagrass meadows rather than on land was the remarkably fast release of methane into the water column – where the plant tissue acts as a straw, helping the gas to escape from the seabed into the water.

As seagrasses only grow in shallow water, pelagic microorganisms have a small opportunity to consume the methane before it ends up in the atmosphere. Additionally, the seawater flowing through the sands on which these seagrasses grow, quickly ‘washes out’ methane from the sediment.

Sina Schorn, the lead author of the study, stated: “In seagrass sediments, methane is formed solely from one class of organic compounds. These so-called methylated compounds are produced by the seagrass plant itself. Specialized microorganisms, the methanogenic archaea, then convert these compounds into methane.”

Jana Milucka, senior author of the study, added: “Here we encountered another surprise. The rates of methane production were similar to those in the intact seagrass meadow. We believe that the reason behind this continuing methane production is that methylated compounds persist in the plant tissue for a very long time.”

They found that methane can still be formed in dead seagrass sediments, and could be detected in plant tissue that had died over two decades ago.

Milucka continued: “Currently, we are seeing a die-off of seagrass meadows worldwide which has a devastating effect on the coastal ecosystems. Our results caution that whereas upon the death of the plant carbon dioxide from the atmosphere will no longer be sequestered and stored in the sediment as ‘blue carbon’, methane may still continue to be released.”

Schorn said: “We need to understand how the seagrass meadow ecosystem functions in order to determine the impact of the ongoing global change on it.”

The research highlights the importance of protecting seagrass meadows for the sake of the climate, emphasising on need for better understanding and conservation of these ecosystems.

The researchers plan to extend their measurements to other regions and other seagrass species – studying the microorganisms involved in methane production in greater detail.