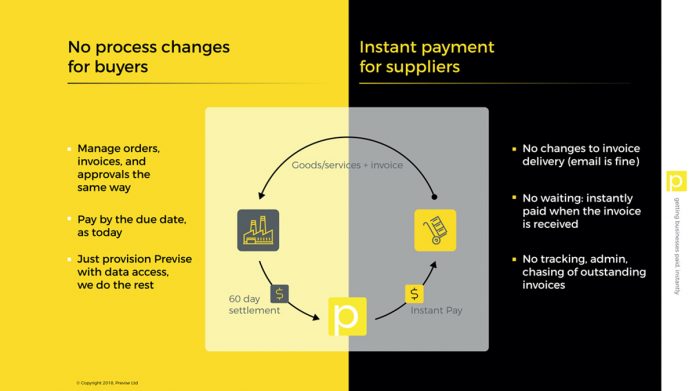 In the wake of the Carillion bankruptcy, there is an opportunity for the public sector to set a new global standard for supplier payments, argues David Brown, CPO and co-founder of Previse

The ripple effects of the Carillion bankruptcy are still being felt across both public and private sector procurement. With the construction giant owing £800 million to suppliers up and down the UK when it went under, it is no surprise that the affair has evoked strong emotions and calls for action. In October, a bill with the backing of over 200 MPs will be debated which would put construction companies’ retentions into a safety deposit scheme. This may well be the latest of a number of interventions into payment practices.

The scrutiny is good news. Carillion is the canary in the coal-mine for the problems caused by companies treating supplier payments as ‘lines of credit’, as the MPs report put it. We should fix the problems now.

It is brilliant to see that, as well as looking at how the private sector manages its supplier payments, the government is focused on ensuring that public sector procurement is leading the way when it comes to paying suppliers quickly. As a powerful economic force, the public sector can make a critical difference for small suppliers and set a new standard for the commercial world.

Slow payments, caused by lengthy payment terms, are one of the leading causes of small business bankruptcy in the UK. They are also extremely wasteful, for both suppliers and buyers. While waiting for their invoices to be paid, suppliers are often forced to turn to expensive credit to cover their cash-flow. At the same time, their productivity is crippled by the need to constantly chase up invoices and the lack of cash to invest in the business. This pushes up the costs of doing business substantially and, ultimately, feeds through into higher prices for buyers if those suppliers are to stay in business.

Speeding up payments, then, is not only a question of ethics but a sound financial decision. It means, not just saving the jobs of hundreds of thousands of people across the UK, but helping reduce the cost of purchasing and stretching budgets further.

That said, it is all very well pointing out the benefits of speeding up payments. Achieving it is another matter.

With 63% of organisations reporting that they have received duplicate invoices, invoices cannot simply be paid without proper checks and balances. However, given that most invoices are still managed on paper, checking invoices is a time consuming and inefficient process. A study from Concur has found that the average invoice ties up 15 employees.

To help speed up payments, many public sector purchasers have been encouraged to take up supply chain finance (SCF). These schemes allow suppliers to be paid by an SCF provider on the buyer’s behalf once an invoice is approved, speeding up payment without impacting the buyer’s cash-flow. However, as you will no doubt have found out if you have implemented SCF, it is far from a silver bullet.

SCF schemes require huge on-boarding costs for suppliers, in terms of technology and compliance procedures. In practice, this means that they are completely impractical for smaller suppliers. Our analysis shows that the best in class SCF programme is able to service just the largest 15% of a buyer’s suppliers, with the average for a bank-led scheme closer to 1% penetration. Those very large suppliers involved are not the ones who struggle to access finance or who have acute cashflow constraints.

Not only is SCF unworkable for smaller suppliers, the introduction of SCF can often lead to a buyer extending their payment terms. This has no impact on the businesses covered by the scheme, but the 99% of companies not covered by SCF actually end up in a worse position than they were before the scheme was introduced because they are waiting even longer to be paid.

While SCF provides a useful tool to finance teams to optimise working capital, another solution is required to speed up payments for small suppliers.

There is good news, however. With slow payments high on the political agenda and the emergence of new technologies, we can have instant invoice payments for all suppliers, without requiring major process changes.

Powered by machine learning technology, Previse’s InstantPay takes a purchaser’s ERP data and accurately predicts the few invoices that are unlikely to get paid so that the rest can be paid instantly by a funder – typically a bank or other large financial institution. The buyer then pays the funder back on its normal payment terms.

Suppliers which opt-in to have instant payment pay a small fee, typically 1% of invoice value per month, which makes it extremely economical for smaller companies.

Previse’s programme doesn’t require buyers to make process changes to get suppliers paid faster. Buyers can maintain their existing processes, or work more incrementally to improve them, without worrying about slow payment times for suppliers.

UK Public sector procurement was worth £223 billion in 2017. Imagine the transformative effect that enabling that money to be paid to suppliers instantly would have. Moving that money into the economy could create hundreds of thousands of new jobs, boost innovation and significantly reduce purchasing costs.

This is an opportunity for our public services to be at the cutting edge of a complete transformation in commerce and set a new standard for the world to follow.

If you’d like to find out more about introducing instant invoice payments, please get in touch. Search Previse InstantPay or email us at info@Previ.se.

Open Finance: What’s next for the UK and Open Banking?

The debate on the future of the EU’s fiscal rules needs more pragmatism!

Supplier diversity and the positive impact on the economy