The Global Food Research Program, University of North Carolina in the U.S. share their perspective on how taxes on sugary beverages are important components of noncommunicable disease and obesity prevention strategies

Obesity and other nutrition-related noncommunicable diseases (NCDs), such as Type 2 diabetes, hypertension, heart disease and cancer, are the leading causes of death and disability worldwide. In 2015 more than 2.2 billion people, or one-third of the world’s population, were overweight or obese, and the prevalence is increasing rapidly.1-3

Consumption of sugary drinks is a major cause of obesity

Excessive sugar consumption is a major cause of obesity and its related diseases, increasing the risks of Type 2 diabetes, hypertension, liver and kidney damage, heart disease, and some cancers.(6-10) The guidelines of the World Health Organization and the World Cancer Research Fund state that added sugars should constitute no more than 10% of an individual’s total calorie intake and preferably less than 5%.(6,7)

Sugary drinks often have no nutritional value and are particularly harmful to the body. The liver absorbs sugar in liquid form more quickly than in solid form and, therefore, cannot efficiently process and release it. The excess is stored in the liver as fat or glycogen deposits.(11) This can lead to fatty liver disease and increased risks for diabetes and other NCDs. Consuming sugar in liquid form, be it from 100% fruit juice or from sugar-sweetened beverages, does not reduce food intake.

Sugary drinks contribute to undernutrition when they replace foods or drinks with greater micronutrient densities. For example, in some Asian, African, Latin American, and Caribbean countries, many infants consume sugary drinks as weaning foods, which can worsen undernutrition and stunting.(12-18) Infants with stunting face a much greater risk of high visceral fatness, hypertension, and Type 2 diabetes.(15,19-23)

Sugary drink taxes are win-win decisions for governments because such taxes reduce sugary drink consumption while increasing revenues to fund other government services and initiatives.(25)

Sugary drink taxes increase public awareness of the harms of such drinks and incentivise the food industry to reformulate products and market healthier beverages.(26-28)

In addition to the health-related economic and human costs of sugary drink consumption, the production of sugary drinks has important environmental consequences, particularly in water use and carbon emissions. The total water life cycle cost of the production of half a litre (500 ml or 17 oz) of a regular soft drink ranges from 168 litres of water for sugar beets to 309 litres for sugarcane.(29-31) This water footprint includes caffeine and vanilla extract, which account for about 120 litres of water. In the United Kingdom, the associated carbon emissions amount to about 0.26% of all of the country’s emissions, mainly from packaging (59.00–87.00%),(32) refrigeration (33.00%), and transportation (7.00%). 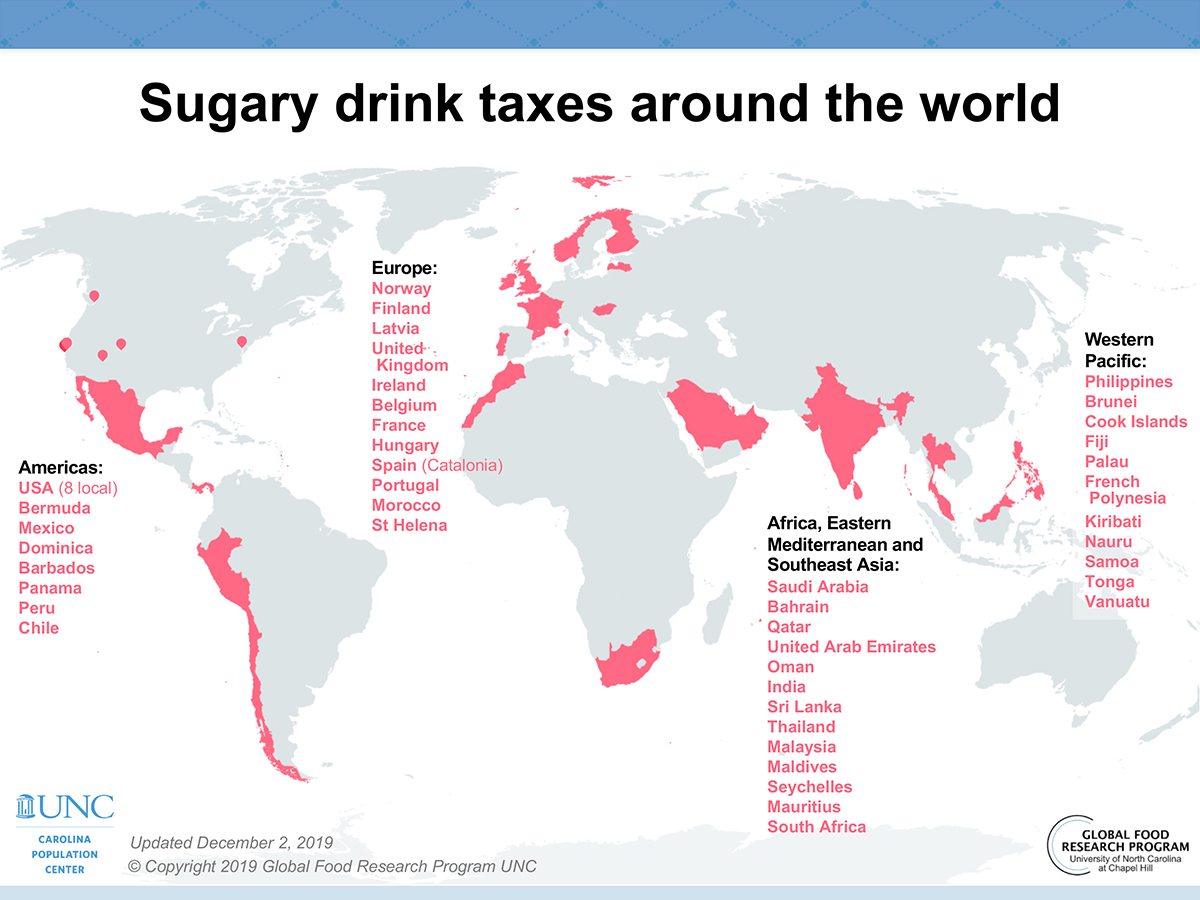 Prior to the introduction of its sugary drink tax in 2014, Mexico had the world’s highest intake of sugary drinks. Its modest tax, 1 peso per litre (around a 10% tax), has effectively reduced consumption and is hailed globally as a successful, positive public health policy.

After implementing the tax, Mexico experienced a significant reduction in sugary drink purchases,(33, 34) an increase in water purchases,(33) and no change in total employment.(35)

Mexico’s tax most significantly reduced sugary drink consumption among lower-income and high-volume consumers, thus achieving health benefits among the two groups with the greatest health risks.(36) During the tax’s first year, sugary drink purchases among the poorest third of the population were reduced by 9%, compared to 6% on average.(33) In the tax’s second year, contrary to food industry predictions, per capita sales and purchases of sugary drinks declined further.(37) Mexican research shows that after implementation of the tax, overall purchases of healthier beverages replaced those of sugary drinks.(33) In the first year after implementation, overall water purchases increased by about 4%.

Sugary drink taxes in U.S. cities have shown even larger impacts on purchases. The 10% tax in Berkeley was linked with significant declines after one year and a decline of almost 50% after three years.(39-41) In Philadelphia, a large, lower-income city, a tax of approximately 15% reduced consumption by more than 38% in one year.(42)

The United Kingdom, Ireland, Saudi Arabia, the United Arab Emirates, India, South Africa, and many other countries and cities have passed taxes of 20% or higher as essential public health strategies.(43-47)

Excise taxes have worked for other unhealthy products. Taxes on unhealthy food products in Hungary and Denmark showed similar positive impacts in reducing purchases, as did a tax on nonessential food purchases in Mexico.48-50 Tobacco taxes have played a significant role in reducing tobacco use in jurisdictions around the globe.(51)