The notion of the urban graveyard in which deaths exceeded births appears to have applied to most British and European towns and cities until at least the last quarter of the eighteenth century. Such urban settings were intrinsically unhealthy, requiring a constant influx of immigrants to sustain them.

By the late 19th century, a greater incidence of chronic disease as a cause of death may have enabled the emergence of two different types of selection effects of migration upon mortality, termed ‘the healthy migrant effect’ and the ‘salmon-bias effect’. The ‘healthy migrant’ suggests natural selection through which those moving from rural to urban locations were frequently healthier than their peers who remained in the countryside and when in towns they might display lower mortality than those who were urban born, even if mortality in their birthplace was higher than in the town. The ‘salmon-bias effect’ suggests that lower urban mortality is the result of selective return migration to the countryside of those who became diseased or acquired a chronic illness while those who remained healthy persisted in their urban residence. Rural locations will, therefore, have displayed higher mortality in part because of the return to them of those who had gone to towns within which they acquired chronic disease.

These hypotheses help to make sense of the geography of a chronic disease such as tuberculosis (TB), a leading cause of death over much of the life course in the latter half of the 19th century. TB has been the centre of various unresolved debates regarding urban-rural, occupational and sex-specific differentials in mortality in that period. There is disagreement about why women had higher death rates from TB than men and whether this was due to innate female susceptibility, poorer nutrition or differential exposure. One frequently encountered argument is that higher female TB rates were due to the weaker bargaining power of females within their households, a feature thought to apply to low wage agricultural areas where women had limited employment opportunities.

In contrast, some have suggested that high rural TB might be due to a salmon-bias effect caused by return migration of those who had contracted that disease in urban places. All of these claims have unfortunately been based on the use of aggregations of deaths recorded in civil registers and not on individual-level data from those same registers. Scotland provides a unique opportunity to use individual-level data from the rural Isle of Skye where agriculture and fishing were dominant and emigration was high and the fast-growing, industrial town of Kilmarnock which grew markedly in part through immigration. In both locations, nominative linkage was possible involving persons appearing in individual death, birth and marriage certificates with those same individuals listed by name, age, sex, occupation and birthplace in the decennial censuses between 1861 and 1901.

Absence from a census permitted the identification of individuals who had left either Skye or Kilmarnock following the previous census and new arrivals in these places could be identified in a similar fashion. It was possible to track the occupational status and migratory history of those dying at specific ages from TB. TB mortality in the age groups 10-19 was considerably higher in Kilmarnock than Skye and in Kilmarnock was significantly higher for females than males. This was almost entirely a result of the heavy involvement of women in cotton manufacture which created working conditions exposing them to TB. Although far fewer males worked in textiles, those that did were as vulnerable to TB-related deaths as females. This finding provides no support for the theory that young women were inherently more vulnerable to the disease. 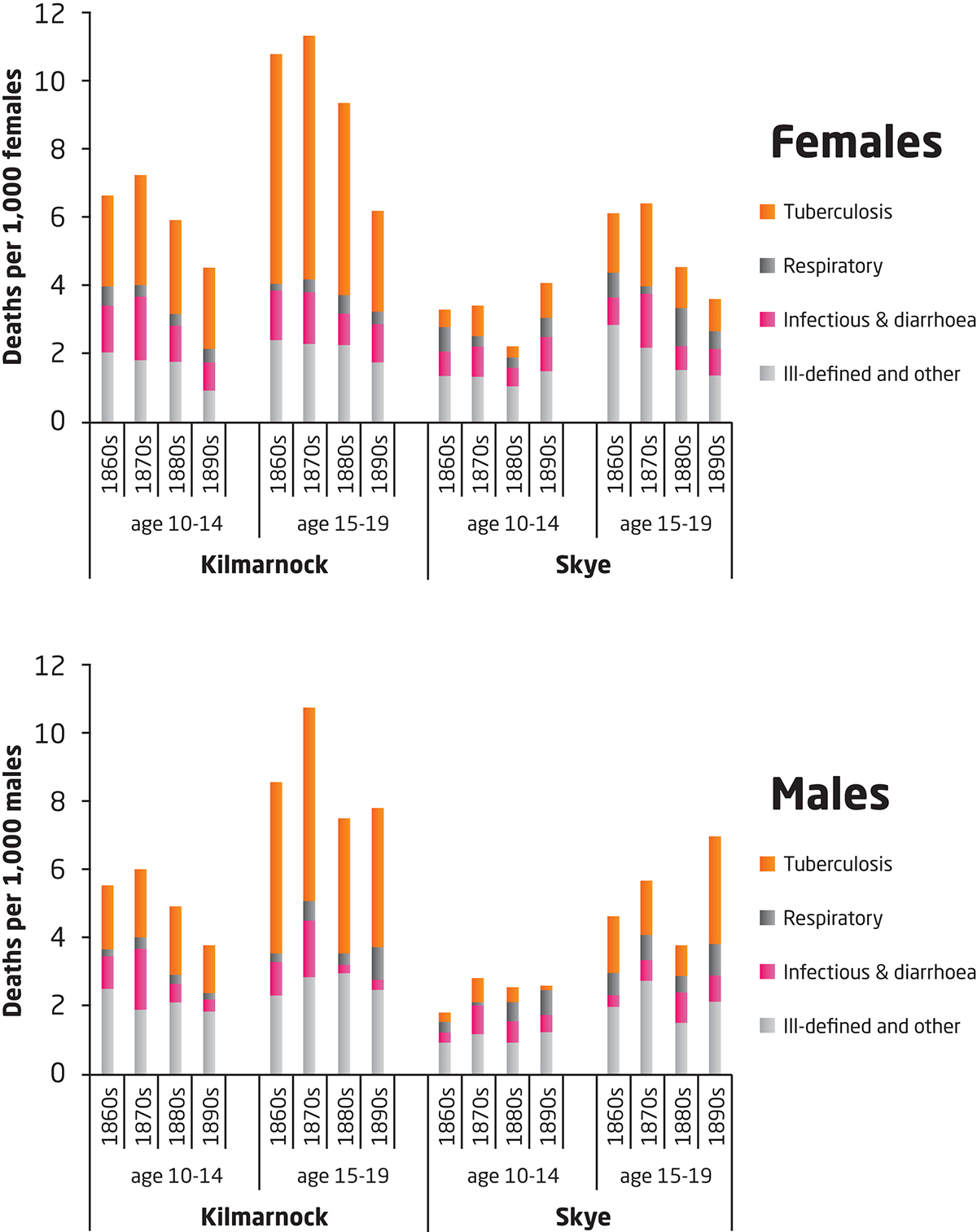 Male death rates from TB were considerably higher than for females in Skye resulting from selective outmigration of healthy people, particularly males, coupled with their return migration when chronically ill. The death certificates provided valuable information on the duration of the illness leading to death and for those dying from TB on Skye was 18 months to two years, giving sufferers time to travel home for care. Those suffering from acute infections would have had less opportunity and possibly inclination to migrate back to the communities of their birth from which they had emigrated. Rural locations which experienced higher out-migration of a particular sex were, therefore, more likely to experience higher mortality rates from all causes due to the loss of healthy emigrants and from TB, in particular, because return migrants were frequently unhealthy. This data provides limited support for the bargaining-nutrition explanation and suggests that exposure to infection was of far greater significance.

Furthermore, the string of late Victorian industrial legislation bringing improvements in the working environment led to a fall in urban TB mortality. Simultaneously, those suffering from TB were hospitalised or entered sanatoria and were less likely to seek the care of kin in their rural birthplaces which had previously inflated the death rates of such locations. There are striking similarities with findings in more recent studies of Africa that have highlighted the interrelationship between migration and mortality in the context of HIV/AIDS; a disease which like 19th century TB in Europe takes a relatively long time to reach a fatal conclusion.

This research is supported by The Wellcome Trust, grants 082200/Z/07/Z, Doctors, deaths, diagnoses and data: a comparative study of the medical certification of cause of death in 19th century Scotland and 103322/Z/13/Z, Migration, Mortality and Medicalisation: investigating the long-run epidemiological consequences of urbanisation 1600-1945.