The UK has fallen to the 13th most socially progressive country in the world, a study of the leading countries in various societal issues has found

It shows that Norway, Iceland, Denmark, Finland and Switzerland have consistently been in the top five of the Social Progress Index, compiled by global nonprofit Social Progress Initiative, over the past five years.

Meanwhile, the UK’s score has declined, though it is still ranked 12th. Chad is the country with the poorest rating for social progress, followed by Afghanistan and Eritrea.

As well as the index, the study analyses information from international institutions such as the World Economic Forum’s Global Gender Gap Report, the United Nations, the World Health Organisation and Gallup’s World Poll, as well as non-governmental organisations.

Iceland has made the most progress towards closing the gender gap, with the small island achieving the highest score. The country places in first for literacy rate, political empowerment and wage equality, having become the first country to make the gender pay gap illegal after passing a revolutionary law in 2018. 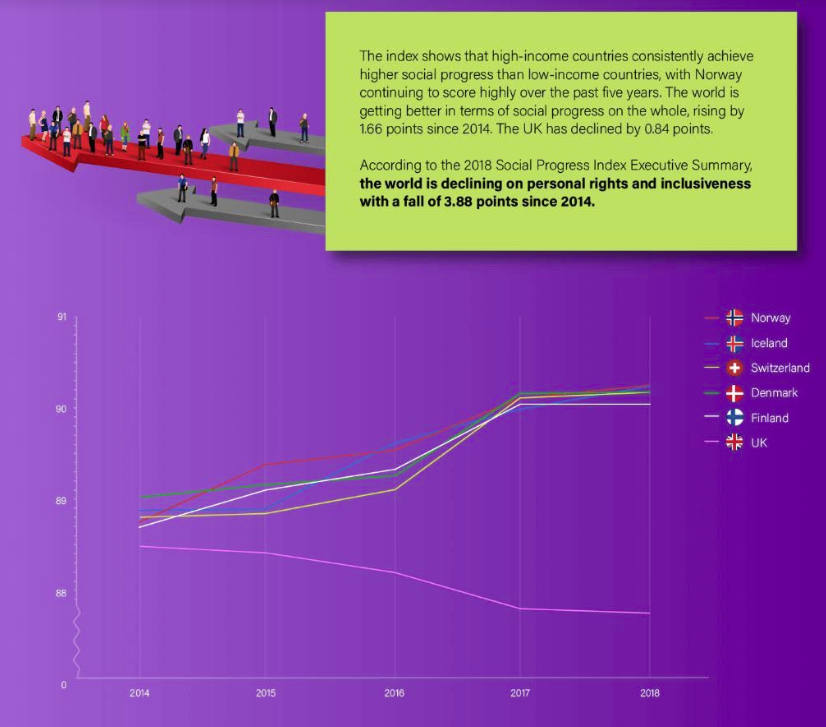 The UK is ranked 15th for gender equality, scoring highly for educational attainment but lacking in political empowerment. After companies with more than 250 employees were required to publish gender pay gap statistics earlier this year, it was revealed that almost all organisations have a disparity, drawing more attention to the Icelandic ban.

However, Hugh McLachlan, emeritus professor of applied philosophy at Glasgow Caledonian University, argues that merely gender equality for the sake of it is not a reasonable moral ideal.

“Individual people, whether they are male, female, both or neither should be treated fairly. However, there is no reason to suppose that such fair and just treatment will lead to gender equalities in the outcomes of such treatment.

“Unjust and unfair treatment, no doubt, often occurs with regard to pay and other factors but the presence or absence of a gender pay gap is not a reliable measure of it. Similarly, the attempts that organisations might make to reduce these gaps – and, perhaps, to appear virtuous – might not be fair or just. Some people might be paid too much. Some too little.

“Given current gender trends in educational attainment, in the future, the gender pay gap for the economy as a whole might well be tilted in favour of women. So be it, I would say if such a gender inequality comes about.”

The research has been compiled by the Forward Thinking Countries project. It also includes timelines of when the most progressive countries have introduced laws that focus on key societal issues, as well as where in the world progress has been made – and lost.

Unhealthy food promotion will be restricted in retailers from October 2022

1.5 million children worldwide have been orphaned by the pandemic