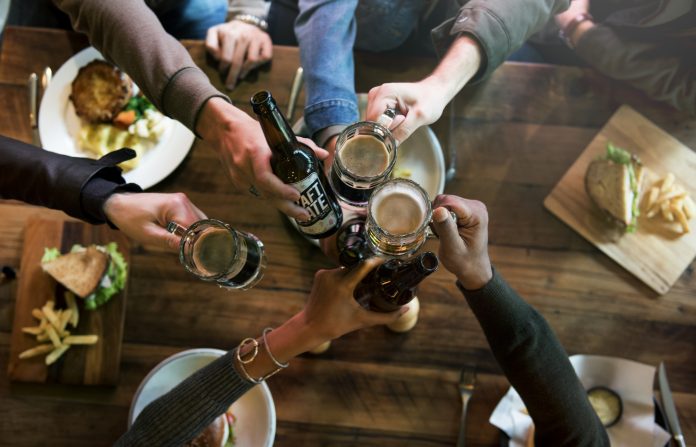 Though the UK’s recommended alcohol limit is under 14 units weekly, researchers still suggest less, as the risk of cardiovascular diseases can still be increased by even moderate amounts

Cardiovascular issues such as heart and cerebrovascular disease can still be induced by drinking even in small amounts, as researchers analysed hospitalisations related to cardiovascular events among more than 350,000 UK residents aged between 40 and 69 from data obtained from the UK Biobank study.

Published in the journal Clinical Nutrition, academics from Anglia Ruskin University (ARU) obtained a sample of 333,259 people who drank alcohol.

In this study, they unveil the adverse effects even minimal alcohol consumption can cause, some of which have been formerly promoted as healthy.

“While we hear much about wine drinkers having lower risk of coronary artery disease, our data shows their risk of other cardiovascular events is not reduced.”

Participants were asked about their overall weekly alcohol intake and their intake of specific types of alcohol – including beer, wine, and spirits – with a follow up for a median of approximately seven years, capturing all incidents where patients had been hospitalised through cardiovascular events.

Results showed that for those participants that drank less than 14 units of alcohol per week – which is the UK government’s limit recommendation – each additional 1.5 pints of beer at 4% strength (alcohol by volume) is associated with a 23% increased risk of suffering a cardiovascular event.

The researchers excluded anyone who had suffered a previous cardiovascular event, as were former drinkers or those who had not completed information on alcohol intake.

However, they argued that biases in existing epidemiological evidence have resulted in the widespread acceptance of the “J-shaped curve”, which has wrongly suggested low to moderate alcohol consumption can actually be beneficial to cardiovascular health.

The biases involved in the study include using non-drinkers as a reference group, when many do not drink for reasons of existing poor health, combining of all drink types when determining the alcohol intake of a study population, and embedding the lower risk observed of coronary artery disease among wine drinkers, potentially distorting the overall cardiovascular risk from the drink.

When the biases were accounted for by the researchers, they were able to acknowledge the large number of alcohol drinkers who also experienced cardiovascular events and malfunctions due to their consumption of alcohol ­– even when it was considered ‘minimal’ in comparison with more frequent drinkers.

Lead author Dr Rudolph Schutte, course leader for the BSc Hons Medical Science programme and Associate Professor at ARU, said: “The so-called J-shaped curve of the cardiovascular disease-alcohol consumption relationship suggesting health benefit from low to moderate alcohol consumption is the biggest myth since we were told smoking was good for us.

“Among drinkers of beer, cider, and spirits in particular, even those consuming under 14 units a week had an increased risk of ending up in hospital through a cardiovascular event involving the heart or the blood vessels. While we hear much about wine drinkers having lower risk of coronary artery disease, our data shows their risk of other cardiovascular events is not reduced.

“Avoiding these biases in future research would mitigate current confusion and hopefully lead to a strengthening of the guidelines, seeing the current alcohol guidance reduced.”