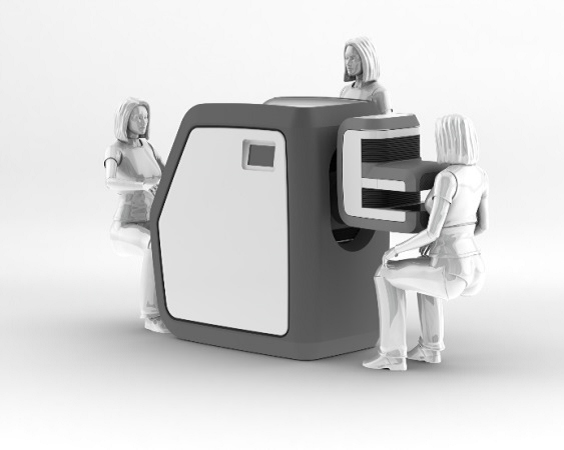 Breast cancer accounts for approximately 26% of all cancers diagnosed today. One in 8 women are expected to be diagnosed with breast cancer in their lifetimes. According to the National Cancer Institute, in 2016 there were 246,660 new cases and 40,450 deaths from breast cancer in the U.S alone. Like other cancers, breast cancer is most successfully treated if the disease is diagnosed early. In addition to better health outcomes, there are economic benefits to accurate screening and early diagnosis of the disease. It is estimated that the cost of treating early stage breast cancer is about $12,000, while late stage treatment costs start at around $150,000.

Common practice for breast cancer screening is x-ray mammography for women over 50. Unfortunately, for too many women, x-ray mammography is too ambiguous to detect their disease in time for effective treatment. The problem is that the specificity of mammography suffers from its difficulty in distinguishing between benign and malignant masses: dense breast tissue appears similar to cancer on x-ray mammograms, leading to inconclusive imaging results. Patients with suspicious mammograms are prone to either unnecessary biopsies or late identification of serious disease. Of the women that are screened with mammography, roughly 18% have a suspicious but inconclusive finding and a third of these are sent for biopsy. Roughly 75% of biopsies prompted by mammography come back negative and in the U.S alone these account for 1.5 million unnecessary biopsies that could be prevented with more cancer-specific diagnostic imaging. The situation is the most urgent for women with a known high and intermediate lifetime risk for breast cancer. High-risk patients have to be screened at a significantly younger age than average risk women. Younger high-risk women tend to have denser breast tissue which does not produce accurate images when scanned using x-ray mammography.

The inconclusive nature of breast cancer detection with either mammography or its combination with MRI means that a large cohort of women (especially, high-risk patients) cannot rely on imaging to start disease treatment at the early stage. These women are forced to contemplate prophylactic mastectomy because the predictive power of current imaging is so poor.

Another advantage of Radialis’s design is its slim detector head and minimised “dead area” (the distance between the imaging part of the detector and its housing). This comparatively small step allows for significant clinical benefits since it tremendously improves visualisation of deep chest lesions, provides more options for detector heads positioning around the patient breast and access to lymph nodes to evaluate its possible metastatic involvement.

The assembly and imaging performance evaluating of Radilis’s PEM are underway. Initial results with phantoms mimicking breast lesions of different sizes demonstrate that tumours as small as 1.2mm in size will be detectable in a clinical setting. The ultra-high resolution achieved combined with a large field-of-view detector design enables high-resolution, low-dose molecular breast imaging. Additionally, large area stationary solid-state sensor design means that there will be less radiation that will escape Radialis’s device.

In addition to improved early breast cancer detection for a large cohort of patients, the use of PEM for screening of the high risk population will allow for significant improvement in patients’ compliance for frequent tests. Indeed, at the current stage of mammographic detector technology, extreme breast compression is applied. The associated pain and anxiety is so strong that a large number of patient refuse mammography after their first experience. In contrast, PEM only requires breast immobilisation rather than compression and hence completely eliminates pain. This has the potential to significantly improve compliance and the effectiveness of cancer detection.

Overall, once implemented in clinical practice, Radialis’s PEM technology can be used as (1) an adjuvant technique for breast cancer detection, and (2) an integral part of the surveillance protocol of women at high and intermediate lifetime risk of breast cancer. In addition, the technological advances used will reduce manufacturing cost for PEM devices facilitating their wide-spread clinical usage, thus positively influencing people health.

Dr Alla Reznik is a Canada Research Chair in Physics of Molecular Imaging and an Associate Professor in the Physics Department, Faculty of Science and Environmental Studies, Lakehead University. She is also affiliated as a Senior Scientist in the Thunder Bay Regional Health Research Institute (TBRHRI). Dr. Reznik has completed her PhD in solid-state physics at the Technion- Israel Institute of Technology. After several years as a Senior Physicist at the GE Medical Systems she decided to return to academia and accepted a Research Associate position at the University of Toronto, Canada. In 2008 she was appointed a Canada Research Chair in Physics of Molecular Imaging and in 2013 re-appointed as a Canada Research Chair in Physics of Medical Imaging. She is a specialist in photoconductive materials and technologies for radiation medical imaging.  The focus of her work is on solid-state technology for organ-specific Positron Emission Tomography (PET). The goal is an improvement in resolution and sensitivity over commercially available PET imagers. Another focus of her work is on advanced low-dose direct conversion x-ray imaging detectors based on novel x-ray-to-charge transducers. Reznik group’s PET research has led to the launch of Radialis Medical – the first joint Lakehead – TBRHRI spin-off-company, which will produce a commercial version of the technology for breast cancer detection.