VICTORIA (VIDEO ANALYSIS FOR INVESTIGATION OF CRIMINAL AND TERRORIST ACTIVITIES) is a Horizon 2020 EU Security Project, which is developing robust and accurate video analysis technology to boost the law enforcement agencies’ investigative capacity

On one hand, the amount of video data is continuously increasing with the rapid deployment of video equipment, surveillance cameras in public and private areas, body-worn cameras of police forces and smartphones or digital cameras used by bystanders. Indeed, we know that even criminals or terrorists themselves post videos on the Web that they have recorded during their acts.

On the other hand, and in spite of this growth, the video investigation work is still mostly carried out manually by the LEA officers. These current practices are too resource-intensive to handle the huge and steadily increasing volume of videos that need to be analysed. Consequently, post-event extraction of vital first clues from videos takes a substantial amount of time, causing further delays that no one wants.

There is without question an urgent need for efficient tools that can assist the LEAs in their daily video investigation tasks. Tools that can help them process the huge volume of video material with less effort and find clues and evidence faster. The urgency of addressing this need has become particularly clear after the wave of terrorist attacks that have hit several European countries since 2015.

The three-year EU-funded project VICTORIA, launched in 2017, is addressing this need. By the end of the project in April 2020, the consortium will deliver an ethical and legally compliant Video Analysis Platform (VAP) prototype that will accelerate the video analysis tasks of LEAs.

Developing technologies that meet the real operational needs of LEAs

As legal investigation videos are kept confidential by the LEAs, the VICTORIA consortium with its partnered LEAs, selected six operational scenarios, covering the majority of cases encountered by the different LEA units in Europe, with various levels of importance, i.e. from police surveillance to terrorist attacks. These scenarios and their variations were then staged and filmed with actors, using alternative light and weather settings and with camera resolution and video quality normally encountered in real conditions. Once filmed, these video datasets helped fine-tuning and testing the VAP and the algorithms throughout the project.

Indeed, the VAP is offering a unified human-machine interface and is based on big data technologies that are both scalable and open. Additionally, third parties can integrate their analytics into the VAP with minimal effort, extending the capabilities of the platform even further. 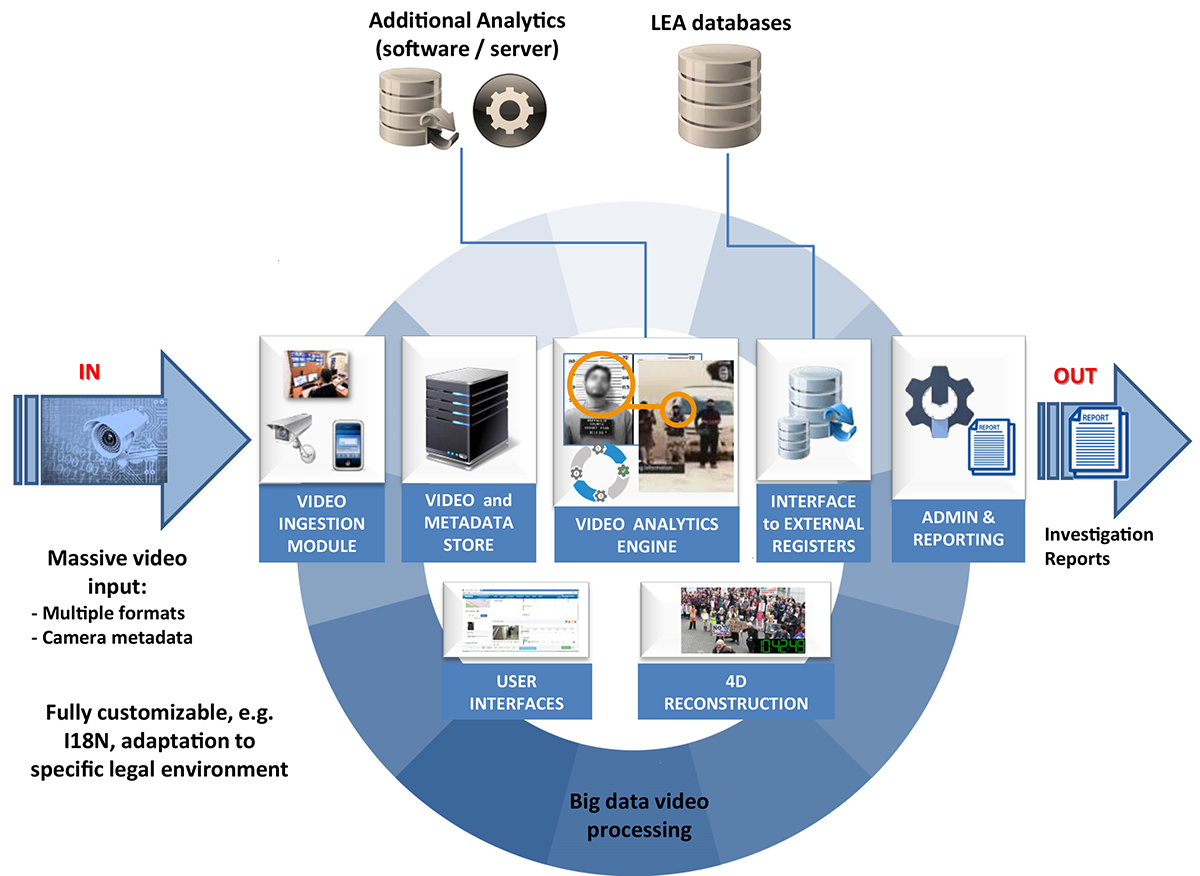 After more than two years of work and several workshops with project technical partners and LEAs, the VAP is now ready to be deployed at the project LEAs’ premises (Spain, United Kingdom, Romania and France).

Following the final training workshop of the LEAs, the field trials carrying on from mid-September 2019 to end January 2020, will provide substantial and important feedback on the performance of each technical component and the usability of the last version of the VAP in real case scenarios. One of the addressed topics will be to evaluate how the daily work of the end-users has been supported by the VICTORIA platform. A roadmap of new developments and improvements needed in the future will be defined to pave the way to a successful continuation of the VICTORIA platform developments.

Lastly, to encourage even further development and demonstrate how open and flexible the VAP is and how it has been designed to support analytic tools from third parties with varied features, VICTORIA has launched its Analytics Contest. Audio and video analysis technology developers are invited, starting from 2nd December 2019, to propose and/or integrate their algorithms, to be benchmarked with the VICTORIA video datasets, into the VAP.

The main positive societal impact of VICTORIA will be the improved protection of the citizens against crime and terrorist activities, thanks to the enhanced video investigation capability of LEAs, enabling them to set-up targeted operations to stop offenders and provide evidence to support criminal charges. The investigation of an increased volume of video material will potentially contribute not only to convict offenders but also to release wrongly accused people.

VICTORIA avoids negative perception from the public, such as the “Big Brother is watching you” syndrome because the project does not target surveillance applications but rather post-event investigations carried out in the context of specific crime and terrorist activities. Therefore, solving more criminal cases and accelerating legal investigations with VICTORIA will reinforce the confidence of citizens in their police forces.

An international conference presenting the VAP to LEAs and audio/video analytics developers will take place in Spring 2020. To learn more about the upcoming Analytics Contest and the final conference, please visit our website https://www.victoria-project.eu/victoria-analytics-contest/.

The VICTORIA project has received funding from the European Union’s Horizon 2020 research and innovation programme under grant agreement No 740754.