Home Open Access News Workplace News What is “quiet quitting” and how is burnout affecting the UK?

Across the UK workers are being spread thinly across small wages and high costs of living. Over the last year, bills, food, oil, houses, rent and more have all raised significantly, but living wages nationally have changed minimally. This has brought about a change in workers’ mindsets about their jobs – where some are now choosing “quiet quitting”.

The notion of quiet quitting has risen in popularity – it is a notion that workers hold back from working beyond their allocated hours.

A survey by YorkTest found that Google searches for ‘quiet quitting’ on Google went from being almost non-existent to seeing an increase of 18,000% in August, and TikTok has seen over 155 million views on videos around the idea.

LinkedIn also took this term by storm, and thousands of workers came forward to discuss the expectation of working above and beyond working hours and how it may be affecting people’s stress and mental health in a negative way.

Home health testing experts YorkTest discovered seven different ranking factors to compile an index looking at the areas of the UK struggling with burnout, including:

The research also considered the number of people searching for burnout symptoms on Google, life satisfaction and happiness levels, and even the number of hours lost in congestion each year.

Where are the most burned-out workers in the UK?

Not on the graph, Woking residents were recorded to have the highest happiness score at 8.3 out of 10, as well as those who live in Basildon experiencing 74% less time in traffic than those in Watford.

Southern cities are doing the best according to the seven criteria.

Conversely, the new analysis demonstrates that Watford, Bedford and Manchester residents are experiencing the most work-based stress in the UK.

Doncaster came in third, followed by larger cities Manchester and Nottingham. Mancunian workers in the Northern Powerhouse are also having to grapple with rising rent costs on top of salaries dropping. According to the property website Rightmove, private rents have jumped by 23.4% per year.

Despite its high score for life satisfaction, almost a quarter of Bedford’s population are regularly searching for job site “Indeed” each month, in a sign that workers are keen to move jobs due to potentially being unhappy with their work/life balance.

Unfortunately, Watford residents are especially burned out by their current working climate, with residents working for the longest period of time each week. Those living in Watford also experienced a real-time salary drop of 0.12% this year, and are likely to lose an average of 59 hours a year to traffic congestion.

All of these factors were taken into consideration and have been noted to impact the likelihood of someone ‘quiet quitting’ their work. Burnout has been stated to affect over 75%, or three-quarters, of the UK working population, demonstrating that there is an increasing problem across workplaces nationally.

“Taking a stress test can help to detect how your stress hormone levels could potentially be impacting your life, your immunity and your health”

Dr. Gill Hart, scientific director at YorkTest, said: “Our stress levels can vary daily, but it’s becoming increasingly clear that burnout is still on the rise in the UK. Our surroundings, whether they’re at work, at home or purely geographically, can influence our stress levels, and work-based burnout can rear its head for a number of reasons.

“The good news is that there are some steps that you can take to try to minimise your stress levels. Acknowledging that you’re burned out is the first step – and something you shouldn’t be afraid to mention to others. If you’re feeling overwhelmed at work, speak to your manager about your workload to see if they can lighten the load.

“Speak to people you trust, too, and try and spend time doing things you enjoy, as burnout can often dilute our passion for things as it can zap our energy. Cortisol levels affect a number of aspects of our body, and help us to regulate our stress levels and our body’s response to stress. Taking a stress (cortisol) test can help to detect how your stress hormone levels could potentially be impacting your life, your immunity and your health.” 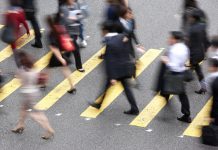