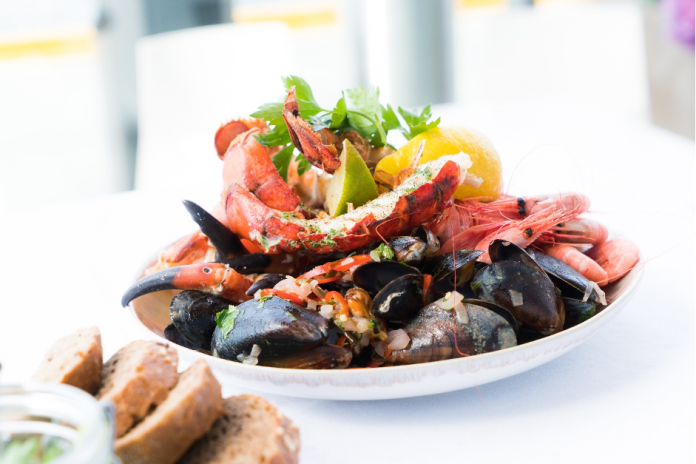 Barry Crackett, Product Designer at Brushtec, takes us through a few of the ways shellfish can lower your carbon footprint

When we think of eating a diet that is more environmentally friendly, we usually imagine a plant-based diet. However, there are other ways to reduce the impact of your meals have on the planet, and one of them is by eating shellfish.

Many people are trying to reduce their impact on the environment. Some recent research found that 32% of customers are highly engaged with adopting a more sustainable lifestyle, while 28% of consumers have actually stopped buying a product because of its environmental impact (Deloitte). As so many people are making their lives more sustainable, people have of course been examining their diets.

It’s long been established that reducing meat consumption is a way to lower your carbon footprint. But recent research suggests that replacing meat with shellfish could rival plant-based eating in terms of low environmental impact. This is because of a few factors, including space allocated for farming, and the eco-systems created during shellfish aquaculture. Here, I’ll take you through the ways that eating shellfish can be great for the planet.

Shellfish can replace other things in the human diet

Often overlooked, bivalves can not only provide a replacement protein in many people’s diets, but they can also offer a nutrient-dense food source for the growing human population. They have a higher protein content than many meats and protein-rich plants (such as beans), and they also contain many omega 3 fatty acids, which are essential for health but lacking in many people’s diets. They also contain many micronutrients, such as iron, zinc, and magnesium.

Many of these nutrients are very important for children’s growth, so eating more shellfish could ameliorate problems across the world of child malnutrition, as well as helping the planet. The high nutrient and protein content of bivalves like mussels, oysters, and scallops, also makes them very good in terms of how much benefit we recoup for the environmental cost of farming.

One of the biggest reasons that shellfish might become a bigger part of our diets is that this type of aquaculture causes less upheaval to land than farming other types of fish, meat, or even plants in some cases.

One of the biggest problems with agriculture is that forest has to be cleared to make way for fields, either for grazing animals or for crops. In contrast, shellfish can be caught wild and actively farmed offshore and in coastal areas, meaning it takes up much less space. This would mean less land needed to be cleared, leaving us more space to devote to conservation and rewilding. Mussels are also grown on ropes, meaning they need very little surface area.

We’ve known for some time now that one of the biggest ways individual consumers can help the environment is by not eating meat. But despite this information, it might still surprise you to know how big the difference between meat and shellfish farming really is.

It’s estimated that for every edible tonne of beef produced, 340 tonnes of greenhouse gases are produced too (World Resources Institute). This is an extraordinary weight to place on the environment. In contrast, for every edible tonne of bivalve protein produced, only 11 tonnes of greenhouse gases are given off. This huge difference is one of the main reasons why so many people are advocating for a move towards this type of protein as a meat replacement on people’s plates.

Even compared to fish, shellfish wins out. For 1kg of edible salmon produced, 5kg is used to feed the fish before its harvested. If we replaced this method of farming with the same amount of protein gained via shellfish aquaculture, we could save 16.3 million tonnes of CO2 emissions from entering the atmosphere every year. For reference, this amount is about half of New Zealand’s total annual emissions (Science Direct).

In stark contrast to many other types of farming, shellfish aquaculture actually has the potential to benefit the surrounding environment, rather than harm it. To analyse the impact that farming (and other) practices have on waterways, we use a measure called Eutrophication Potential.

Eutrophication is what occurs when nutrients washed into watercourses cause a sometimes toxic flush of algae growth, called ‘algal bloom’ (Nature). This can happen when fertilisers used on farmland are washed away into rivers. The algae grows excessively on the surface of the water, blocking out the light and causing other plants to die. As oxygen levels plummet, wildlife living in the water dies too.

Eutrophication Potential is a standardised measure to assess how much potential a practice has to cause this type of damage. Shellfish farming is markedly different to other forms of agriculture, as it actually has a negative value. This is because the shellfish eat the excess algae and other organic matter, meaning that they actively clean up waterways. This is an amazing feature of shellfish farming, as it means aquaculture could be a way to restore oceans as well as live off them.

One of the easiest ways to reduce your impact on the planet is by adapting your diet to centre around foods that are less damaging to the environment when farmed. You might have already done meat free Mondays, or you might even be vegetarian, vegan or pescatarian. But many overlook the potential for shellfish to become a key dietary staple in a more sustainable world, as well as the potential it has to feed lots of people a nutrient-dense diet.