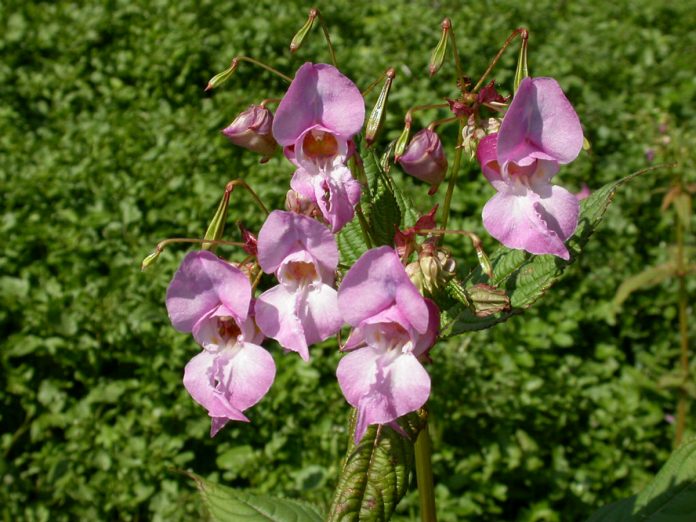 Invasive species are one of the main threats to biodiversity across the world, being second only to habitat destruction in causing biodiversity decline. In the UK, they cost the economy £1.7 billion annually, through costs of control, losses to agriculture and damage to infrastructure.

Himalayan balsam or Impatiens glandulifera is one such species; first brought to the UK in 1839 by Victorian plant hunters, from India and Pakistan. It was introduced as a garden ornamental, and is an annual plant, with attractive pink or white flowers and novelty explosive seed pods. Sometimes known as ‘policeman’s helmets’ due to the flower shape, its efficient seed dispersal helped it to escape from gardens and it is now the most common non-native plant species on riparian systems in England and Wales. It frequently forms large populations on riverbanks, reducing native plant diversity, stealing pollinators from native plants and reducing the abundance of decomposer fungi in soil. In autumn, dying plants choke waterways, while bare riverbanks in winter are more prone to erosion, ultimately leading to increased risk of flooding.

Due to the high cost of manual control and the problems of using herbicides near water, the plant was selected as a target for a classical biological control programme, funded by a consortium of donors led by the Department for Environment, Food and Rural Affairs. This approach aims to diminish the competitiveness of invasive species by reuniting them with their natural enemies that exert control in their area of origin. CABI searched the native range of the plant and discovered a pathogenic fungus (called a ‘rust’) that only attacks balsam, reducing its growth and ability to reproduce.

Following a comprehensive plant screening programme, Ministerial approval was given for the release of the rust in the UK in 2014; the first ever such release in Europe. In 2015, the Natural Environment Research Council funded Royal Holloway, CABI and the University of Reading to study rust establishment, identify factors that might hinder or enhance the efficacy of the pathogen and follow the impact on biodiversity restoration.

The establishment of the rust varied across the original 12 release sites. At some sites, the pathogen overwintered successfully and has spread, while at others, few or even no infected plants were recorded (Fig. A). There appears to be variation in the resistance of different balsam populations to the rust and we are trying to determine what factors might contribute to this resistance and thereby enable us to break down this barrier to biological control.

Perhaps the most obvious factor is the genetic make-up of the plant. We discovered that balsam populations vary genetically, and the plant was introduced at least three times into the UK, from different areas in India and Pakistan. The fact that strains of the rust from one part of the Himalayas are unable to infect plants originating from a different area shows just how specific the pathogen can be. This provides confidence concerning the safety of the fungus, but it does mean that additional strains of the rust are needed to achieve full control in the UK.

However, we have also found that the process is much more complex and that the ability of the rust to infect the plant is affected by native fungi, present in the soil or the plant itself. Every living plant is colonised by a variety of fungi and bacteria that live within its shoots (‘endophytes’) and roots (‘mycorrhizas’), collectively these are called the ‘microbiome’. Mycorrhizas help plants take up nutrients from the soil, enabling a plant’s defence system to be activated, through the increased nutrient supply. Meanwhile, endophytes produce chemicals in leaves that the plant can also use to defend itself against pests and diseases.

In a controlled study, we discovered that the presence of a mycorrhiza and/or endophyte seriously reduces the ability of the rust to infect the plant (Fig. B). This could explain why some populations of balsam appear to be partially resistant.

Biological control offers a safe, economic and sustainable alternative to chemicals. However, our research shows that the natural world is complex, and one must often unravel intricate patterns to open up the full potential of this method and make it as effective as possible.