We spoke to Catherine Bearder MEP about the many challenges around Europe’s environment today, including the funding of Natura 2000 sites and the Convention on International Trade in Endangered Species

First elected in 2009, Catherine Bearder is respected as a passionate and committed local campaigner and a strong voice in Europe, as a member of the Liberal Democrats.

She is committed to protecting the natural environment in Europe, indeed Catherine is working hard to get environmental protection as a core element of European policy, not just as an ‘add-on’. She has studied wild animals in the field in Africa, and as such, Catherine recognises the threats to the planet’s biodiversity and what this will mean for us all if we lose any more. She has also fought to protect elephants and other animals from the catastrophic rates of poaching and is campaigning to stamp out the trade in wild animals caught for the pet trade.

We were fortunate to speak with Catherine to discuss her policies that concern the environment, including funding the Natura 2000 sites which provide vital protection to endangered species. She also sheds light on the report by the Convention on International Trade in Endangered Species (Cites) and the EU Action Plan against Wildlife Trafficking.

Catherine then sheds light on the European Parliament’s vote on a Parliamentary Motion calling on EU governments to properly fund the Natura 2000 sites, which provide vital protection to endangered species. The Motion, which was voted in by over 600 votes, was a response to the European Commission’s Nature Action Plan which was adopted to ensure that the Birds and Habitats Directives was more effectively implemented.

“The concept between Natura 2000 is wonderful, in that you take a large block of land and you map out sites that are continuous and give a recognised movement of nature, migratory flows and water needs. When they have mapped out the whole of Europe in this way, that is only part of the job done.

“We also need to have the funding and political commitment behind that to achieve the goals of Natura 2000. The EU member states are falling on that because they are not funding it properly – it is one of the tensions in the European Union, of course, in that people are looking to member states but do not want to give up their functions. At member state level, it can be very difficult to think European-wide, which is something that we do in the European Parliament all the time.

“While it is a frustration, we can get over that if we ensure that proper funding comes through and we have good reporting and transparency so that the public can see what is happening. Building this into the next (Multiannual Financial Framework) MFF in 2021, which should have mechanisms in place so that member states do what they are signed up to do. That means funding those Natura 2000 properly and protecting them, by not allowing hunting, for example.”

The Convention on International Trade in Endangered Species

In Africa, 2016 figures show that elephant poaching has dropped beneath 2008 levels, when the increase began; but the outlook for elephants in Central Africa remains bleak as poaching levels remain high. Catherine Bearder MEP’s Report on the EU’s Action Plan Against Wildlife Trafficking, calls for a full and immediate ban on all ivory products in the EU. She chairs the cross-party group of MEPs who campaign against wildlife trafficking.

On the report by the Convention on International Trade in Endangered Species, Catherine tells us how it showed that ivory seizures have reached a ‘record high’ in 2016, while poaching has levelled off in many areas.

“The Convention on International Trade in Endangered Species (Cites) is a success story in one respect, in as much that customs officers are recognising that endangered species are going through the European ports of entry and exit, plus technology in this area has advanced. While elephant poaching has been going on for years, clearly it is going to go down if there are fewer to poach, so it is a simple chicken and egg scenario.

“The real concern is that the fewer elephants that are left, then their ivory becomes more valuable. There are so many good people out there giving their lives on an almost daily basis, with game rangers being shot. We have lost some very high-profile people and one such person, Wayne Lotter the head of an animal conservation NGO was based in Tanzania and did some terrific work with local communities.”

Catherine explains that what she hasn’t seen, are the figures of prosecutions and the locking up of poachers. The report, EU Action Plan against Wildlife Trafficking, is something that she raised in the European Parliament and the ACP-EU Joint Parliamentary Assembly. She also tells us about Ofir Dori who is doing terrific work in getting people behind bars, that is not with the local poachers, but with the middle and upper men. Catherine is keen to develop this point for us in her own words.

“Ofir has done sterling work with communities across Africa and in other countries. He comes from Great Apes Survival Partnership (GRASP) (1) and has been talking to African and other leaders about these source countries, who are having their timber taken away, as well as lizards and butterflies, which have been stripped out of the wild and put on the European market. So, we must work with them and close the markets here, so that is why I am for stopping all ivory sales, both old and new.

“We are finding that a lot of new ivory is buried for a few months to make it look like old ivory. While we have the market, we will have poachers. I would like Europe to say NO to ivory sales, so we can get over the issue of rare and artistically valuable items, but the junk stuff such as the cutlery, bangles, earrings and trinkets that grandma has on her shelf cannot be sold because they have no monetary value.”

Catherine then reveals more about the EU Action Plan against Wildlife Trafficking, stressing that the European Parliament worked very hard with the European Commission to bring it forward. When the new Commission came in four years ago, Catherine tells us that this subject wasn’t really on their agenda and so she formed the cross-party group, MEPs for Wildlife. They had hearings, met the Commissioner and worked with officers in the European Parliament to encourage them to come forward with an action plan.

“I was very pleased to get a response to this action plan in European Parliament – two or three things were missing. One was concerning the European Union Agency for Law Enforcement Cooperation (Europol), who didn’t have it in their serious and organised crime plans wildlife crime (Serious and Organised Crime Threat Assessment (SOCTA) – Europol). We knew that it is a very big part of organised crime as criminals only care about making money, whether that involves shifting guns, drugs or ivory.

“SOCTA now has the permission, budget and officers working on wildlife crime as part of their planning. We have a mid-term review of how that action plan is working and the ivory ban was another one – we confiscate animals when we find them and that is a big problem. We heard about a hyena which was kept for two years after it was discovered being illegally trafficked as a tiny cub. It takes two years for them to fully grow, so it had to be held at the airport until it was old enough to move.

“There is much legislation behind what happens to recovered animals, what do you do with rare species, where do you send them to? There is some evidence that where lizards and parrots are concerned, they are sent off to a rescue centre but within six months they have gone from there as they have been sold back into the trade again. There is a whole trail of legislation that still needs to come in to protect these animals.”

In closing, Catherine stresses that she wants to look at what can be done about the issues discussed here at a pan-European level. Catherine believes that the real concern around Brexit is that funding will become even tighter than it is now, and the question arises: who will be monitoring the UK government once the country is out of the European Union? Also, who will prioritise the training of law enforcement and customs officers to keep an eye out for these things? The last word on this point is explained to us by Catherine.

“We’ll lose LIFE Programme funding, something that is brilliant, for example, the Turtle Dove breeding programme in Otmoor, Oxfordshire. They have small amounts of funding so that they can plant strips of grain so that the turtle doves have food. Such money is from the LIFE Programme and I am concerned that after Brexit we will lose much of this cooperation and funding.” 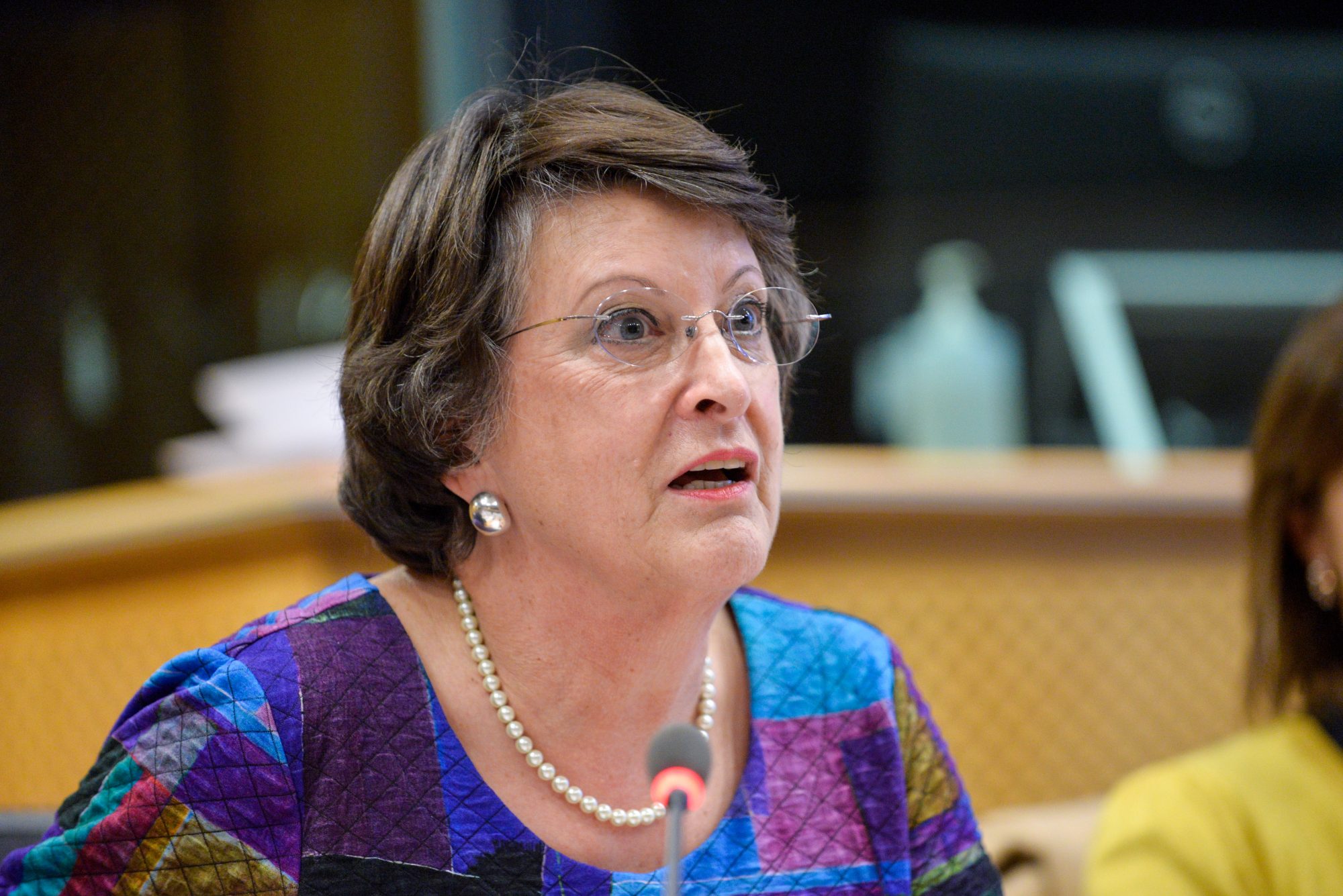