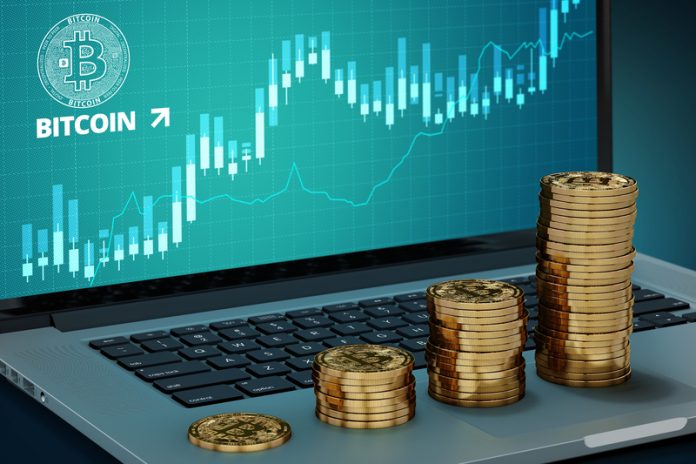 Bitcoin value hits a new high in its record-breaking trajectory, rising 4.5% to $9,700, nearly 10 x its value at the start of the year

Bitcoin value hits an all-time high to top off an incredible year, with experts predicting that it will soon reach $10,000 after starting the year at $100.

From January to May the value remained steady and stayed at under $2000.

However, from spring to summer it rose rapidly, and since September has hit an even more dramatic upwards momentum.

A small blip came towards the end of September, as action from the Chinese government caused a drop in value.

Rival cryptocurrencies such as Ethereum and Bitcoin offshoots like Bitcoin gold have not reached the same heights or manage to do significant or lasting damage to the most prominent and popular cryptocurrency.

However, the unprecedented growth of Bitcoin has raised concern among some financial experts.

The unregulated nature of cryptocurrencies means they bypass traditional banking systems, making it difficult to monitor, but also providing the main draw to most investors.

Transactions are handled by anonymous ‘miners‘, with no governments or banks responsible for backing up the value.

With such a dramatic rise, some are fearing a cryptocurrency bubble, with other sides of the financial world seeing it as a sound investment, even the currency of the future.

After reaching nearly $10,000 hedge funds are jumping at the chance to invest.

He warned of a potential bubble, saying: “For traditionalists, it’s hard to fathom.”

“Rather than a commodity or currency, Bitcoin is like owning stock in a company that will only ever issue 21m shares and never pay a penny in dividends.”

Market strategist Hussein Sayed said that Bitcoin does not appear to be slowing down, however, with a wide variety of investors taking up the cryptocurrency and said there was a good chance it would continue on the same trajectory.

Concern has also grown around the connection between cryptocurrency and crime, which prompted China to take action in September.