Dr. Hojun Song from the Department of Entomology, Texas A&M University explores the future for international research and funding on locusts swarms in the U.S. and Europe

Locust swarms darkening the sky may be mere stories in the Bible for most people living in the U.S. and Europe, but to the people in many developing countries in Central and South America, Africa, the Middle East and Central Asia, as well as China and Australia, locusts are one of the most feared ancient agricultural enemies that have continuously threatened the livelihoods and food security for millennia. Locust upsurges and plagues still affect one in ten people on Earth, resulting in massive crop losses and costing hundreds of millions of dollars in control efforts.

Nevertheless, today there is relatively little emphasis on research and funding to study locusts. The main purpose of this article is to diagnose why locust research has slowed down in recent years and to advocate for more international collaborative efforts and funding to advance our knowledge on locusts for effective and preventative management.

Locusts are grasshoppers that can express an extreme form of density-dependent phenotypic plasticity, known as locust phase polyphenism, in which cryptically coloured, shy individuals (solitarious phase) can transform into conspicuously coloured, gregarious individuals (gregarious phase) in response to increases in population density, forming cohesive nymphal bands and adult swarms, capable of concerted, long-distance marching and flying. There are less than 20 known species of locusts (out of nearly 6,800 species of grasshoppers), but this small number of species wreaks havoc globally. 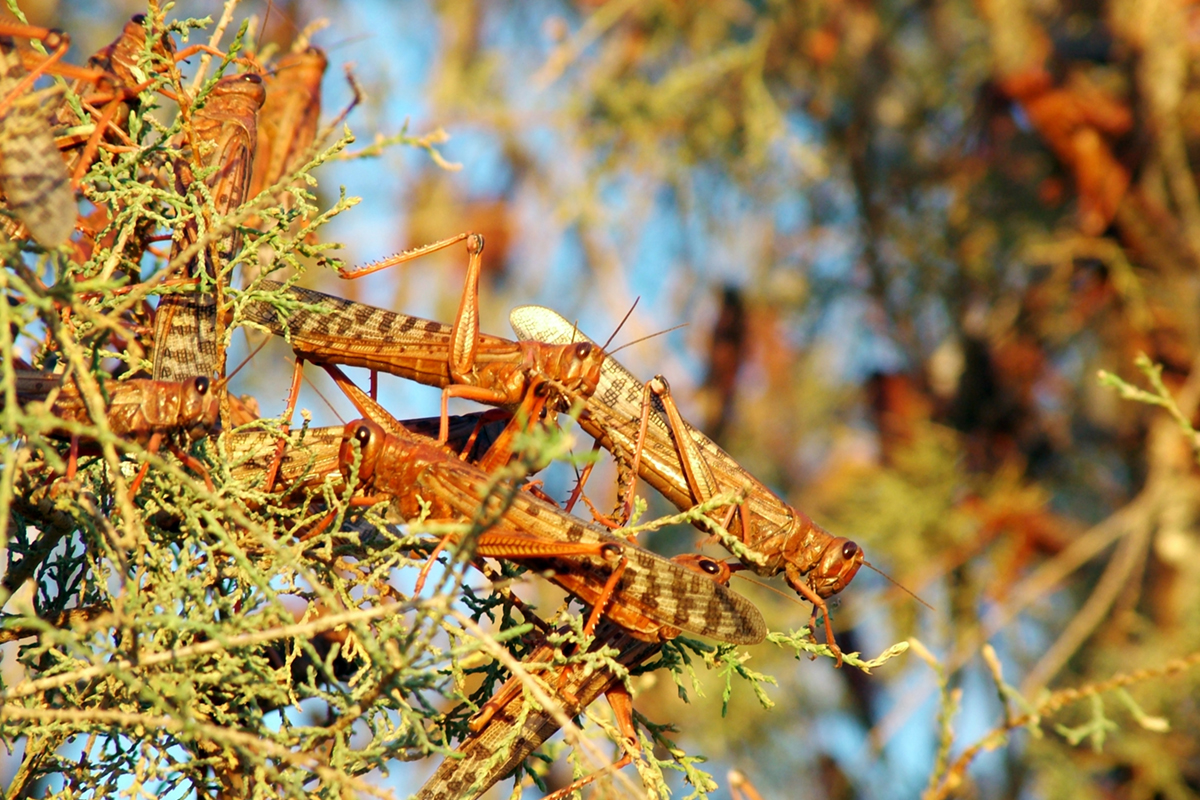 Since Sir Boris P. Uvarov, the father of modern acridology (grasshopper research), discovered locust phase polyphenism in the 1920’s, a tremendous amount of fundamental and applied research has been conducted to understand the biology of locusts. Because locusts affected many regions that were former colonies of the British Empire and the French Colonial Empire, most of what we know about locusts have come from the research centres in the United Kingdom and France. The world’s first dedicated research centre on locusts, the Anti-Locust Research Centre (ALRC), was established in 1945 in London under the Colonial Office, which was headed by Sir Uvarov.

For the next four decades, the ALRC, which later became the Centre for Overseas Pest Research (COPR) in the 1970’s, was the premier centre for locust research, but the shifts in government-sponsored research priorities and politics eventually led to the termination of this program in the 1990’s.

In France, CIRAD (French Agricultural Research Centre for International Development) was established in 1984 to focus on agricultural research on tropical regions around the world. In addition, its locust research unit in Montpellier was the next centre for locust research in the post-ALRC era. This unit is still active, but it too has been affected by the recent shifts in research priorities and the deteriorating funding situation in France today.

While most of the research conducted at ALRC and CIRAD had a distinctly applied angle, locusts have also been a subject of basic science research because locust phase polyphenism is such a fascinating biological phenomenon.

For the past three decades, individual university laboratories in the U.K, Belgium, Germany, Japan, Israel, Australia, China and the U.S have used locusts as a model system to study physiology, neurobiology, chemical ecology, behavioural ecology and genetics. Especially, two of the most important locust species in the world, the Desert Locust (Schistocerca gregaria) and the Migratory Locust (Locusta migratoria), have been studied in-depth in a laboratory setting and now we have a very good understanding of their proximate mechanisms of phase polyphenism.

Unfortunately, however, the number of active locust researchers has gradually become less over time as they retire or switch their fields of research. Added to this, the funding for basic science has become increasingly difficult and competitive to obtain. As a result, only a handful of laboratories around the world currently focus on locust research.

Although the gradual decline in locust research is a serious issue, a more urgent issue has to do with the practical and geopolitical aspects of locust control. Many locust species inhabit remote and scarcely populated areas, which creates tremendous obstacles for their population monitoring and control. Ground locust surveys are too time- and labour-intensive and often inadequate to address the enormous spatial scale of the locust problem.

Furthermore, locusts produce outbreaks at irregular intervals and as a result, these outbreaks are often “unexpected.” Typical locust control strategies are essentially curative, consisting of large-scale applications of broad-spectrum insecticides to infestations, which is not sustainable and certainly harmful to the environment.

In addition, management of these pests is largely dependent on donor’s geopolitical interests, availability of funds, stakeholder inputs and numerous other socioeconomic aspects. Although some locust-affected countries, such as Mexico, Australia and China, have governmental organisations for locust monitoring and control, many developing countries lack such infrastructure.

The Food and Agriculture Organization of the United Nations (FAO) has established the “Locusts and Transboundary Plant Pests and Diseases” unit that monitors and provides early warning for locust outbreaks and works with regional commissions and national authorities for locust control campaigns, particularly in Africa and Central Asia. However, recent changes in the global political dynamics could affect the future capacity to raise necessary funds to deal with locust-driven humanitarian crises.

Despite a century of research into the field, there is still a lot we do not know about locusts, while they are still menacing as ever, affecting many parts of the world. What we need to fight these ancient pests is a renewed global effort to deepen our understanding of locust biology and phase polyphenism to develop an innovative and transformative solution for an environmentally sustainable, preventative management system.

Simply speaking, we need to be able to predict in real-time when and where locusts begin to develop into the gregarious phase and specifically target and control these pests before they swarm. To realise this goal, we need improvements and innovations in remote sensing and drone technology, as well as in control methods utilising effective biological control agents and novel molecular pesticides such as RNA interference and CRISPR-based gene drives.

We also need to understand similarities and differences in the mechanisms of phase polyphenism in different locust species. These research outputs then need to be translated into a practical management scheme that can be effectively implemented by local governments and international organisations. This endeavour is understandably a hefty undertaking, as it will require a large amount of continuous funding and a complex international coordination among academia, governments and local stakeholders. However, if it becomes a reality, we will be able to claim that we have conquered the oldest and the most devastating agricultural pests of the entire human history.