Why should local people make decisions about urban planning in Europe and China – surely that’s what urban planners are for? The Flemish masters did not paint by asking each citizen to make a stroke with their brush. Why should cities, in their might and wisdom, condescend to popular opinion?

The process of citizen engagement is expensive, time-consuming, fraught with challenges, and alters the course of our beautiful, shining plans. At EUROCITIES, the network of over 180 major European cities, we hold citizen participation to be a core value for two very pragmatic reasons – but that doesn’t mean that we here in Europe or our colleagues in China, always get it right. That’s why we’ve been collaborating in the project TRANS-URBAN-EU-CHINA to improve the recipe in both regions.

It is essential for urban planning to enlist experts, and the first pragmatic reason for citizen participation is that people are the experts in their own lives. In order to improve those lives, we must understand them, and it is the people themselves that best understand their routines, their needs and desires. When we fail to understand this, we build lifeless districts, ignored public transportation schemes and unused infrastructure.

The second pragmatic reason is that when people are not consulted, they resist, and then they are happy to remind us who is really in charge. Here in one of our European member cities, a resident was concerned about the safety of one of the new stops on a tramline extension. He did not feel like decision-makers were listening to him so he brought them to court and the whole project had to be put on hold for six months. Many cities across France have spent years embattled by an unexpected local resistance to smart energy meters.

The same sort of thing is happening in China. Our colleagues at the Norwegian Institute of Science and Technology have been studying a case in an area of Shenyang that is majoritively populated by Hui, a Chinese Muslim minority group. The Hui community has long been diverting from local building regulations to facilitate growing families. The resulting idiosyncratic architecture is one of the things that has actually contributed to the attractiveness of this area to visit and even relocate to.

This bottom-up Hui reaction has organised the rebuilding and renewal of the area, in contraversion of top-down planning. Now, after spending lots of time and energy trying to oppose this, the local plans have been aligned to the real local needs. This is not an isolated incident, and another high-profile instance occurred in Beijing when a small group of residents brought a large-scale demolition and redevelopment plan to a halt through the courts. Anyone can see that this is not the ideal way of conducting business, and it is the inevitable consequence, both in China and Europe, of not working with local individuals and groups.

Local policymakers in both regions have long understood this, but while the answer to the question of whether we should involve citizens in decision making is obvious, the question of how to do so is not. In Europe, for example, our cities have a lot of trouble ensuring that consultation involves a representative sample of the population. Post a flyer inviting people to come and discuss a new energy system in their district and you will get a low turn-out, half of whom strongly oppose the motion, half of whom strongly support it, and all of whom are pretty homogeneous in terms of age and ethnicity.

In China, public enquiries and discussion are legally mandated precursors to any urban development, and the form that these proceedings can take is decided at city level. In cities like Beijing, this could involve publishing the information on the website beforehand so that interested parties can respond, or in the case of development, allowing the citizens to select the company. Other cities go further, requiring publication in newspapers and the staging of public hearings.

The problem that our colleagues in Norway have identified in the Chinese process is that even though everyone at every level is given the chance to speak and be heard, the process remains insufficiently dialogical. You make a decision and solicit preference information from me: I give it, you listen and make a final decision. That may sound fine in theory, but practically speaking you need a back-and-forth. Civil society organisations, which are more plentiful in Europe than China, can be really helpful intermediaries in this process. It is only through sustained dialogue, what we also call ‘co-creation’, that citizen engagement can be managed effectively.

To get this going, European and Chinese partners are working on setting up living labs in some Chinese cities this year, as part of our TRANS-URBAN-EU-CHINA project. These are environments in which citizens and other stakeholders can come together with the local authorities and engage in a productive way. The first thing to keep in mind here is that you have to identify and engage a representative sample. This requires more than just publishing an invitation, it really means thinking about where interested parties, like ethnic minorities, different age groups, or special interest groups gather, and reaching out directly. It takes energy!

The next question is what you do with your stakeholders once they are all together. If you just say, ‘what do you want?’, you’ll have a lot of very different answers and ideas that are hard or impossible to mediate and achieve. Then you get a lot of people that are even more frustrated because you have opened the valve for expectations that could not be met. There are various tactics to avoid this, for example, putting together some initial scenarios that stakeholders can choose between and then improve together.

In Europe, where we have been doing citizen participation for a long time, we have had plenty of experience with getting things wrong. For example, our colleagues in the Technical University of Dresden have identified cases in German cities where they let stakeholders come up with development plans that, financially speaking, simply never could have been realised. Then you have the worst possible scenario: people who are jaded by the engagement process because they have given their time and energy and seen nothing come out of it. You end up with lots of very impressive documents about city visions but no concrete change.

Chinese national administrative departments also produce a lot of these documents, and, according to our colleagues at the China Academy of Urban Planning and Design, a big issue is that these plans are often not synchronised with each other. The same local authority may receive two or three development plans that are not in harmony with each other. This is key to what we are calling the ‘planning/implementation gap’, basically the question of why planned development does not succeed as intended.

While we do want to manage this gap, it is interesting that our colleagues in Dresden have identified this as a creative space where bottom-up planning can occur in Chinese cities. When you have conflicting guidance, that’s a good way for the local level, the level of government closest to its citizens, to choose its own recipe from the pantry of plans. So it’s clear that where there are seeds below the street, plants will always find a way up through the cracks. However, in China and Europe, the more we can understand, design and facilitate these bottom-up process, the better our plans will be for improving the lives of those that they are intended to serve. 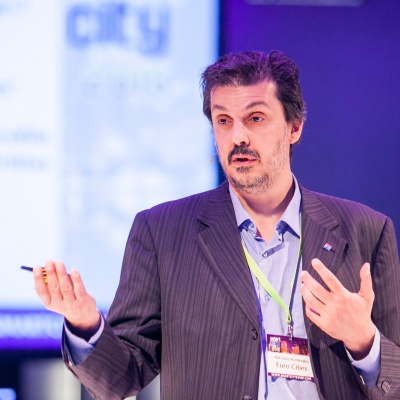