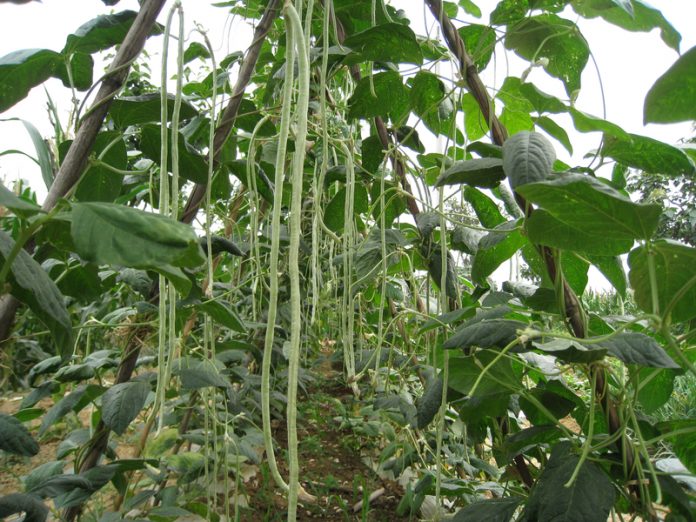 In this interview with Michael Abberton, Head of the IITA Genetic Resources Centre (or Genebank), he shares his expertise on cowpea, a food and animal feed crop that is grown in the semi-arid tropics particularly Africa, but also Asia, the United States and Central and South America

When it comes to plant and animal genetic resources as the foundation for sustainable agriculture and global food security, it is worth thinking about the benefits that a gene bank can bring to humanity. A concern with the preservation of natural resources, conservation and diversity are important in Michael Abberton’s role as Head of the IITA Genebank.

Genetic diversity enables plants to adapt to new pests and diseases, as well as to threats from climate change, drought and soil erosion, for example. Diversity, Michael believes, concerns all species including most important food crops and why they should be available to all. Diversity in and between crops is important, Michael explains and is key to being able to develop resources so that they can adapt to different environments.

The interview moves on to explore Michael’s thoughts on how IITA scientists have developed high yielding cowpea varieties that have resistance to some major diseases and pests, released in 68 countries. Michael explains that there are a staggering 17,000 accessions of cowpea conserved in the IITA Genebank today, from 88 countries, representing 70% of African landraces and nearly half of the global diversity. These have primarily been collected from West Africa to which the cowpea that is now cultivated is indigenous, we discover. Michael then tells us his views on why cowpea is such an important crop in West Africa today.

“Cowpea is a food and animal feed crop grown in the semi-arid tropics particularly the savannahs of West Africa but also other parts of Africa, Asia and the Americas. It originated in Southern Africa and the cultivated form was domesticated in West Africa.

“While it is a very important crop in West Africa and is for used for food and livestock, it grows, well particularly in the “hungry season” (June to October) in the region, when other crops are not producing.

“What we do at the IITA Genebank is to characterise all the different types using both traditional and modern molecular techniques and make them available to breeders who develop high yielding varieties that are early or medium maturing and have consumerpreferred traits such as large seeds, seed coat texture and colour. A number of the varieties have resistance to some of the major diseases, pests, nematodes and parasitic weeds.”

On the global importance of cowpea, Michael draws our attention to legumes in general, of which cowpea is one along with soybean, peas and beans. Legumes are a very good source of protein and convert nitrogen into the atmosphere into the form that can be used by plants. Michael explains more on this and adds his thoughts on the major pests attacking cowpea plants today and more about how the crop is used for both humans and livestock.

“This reduces the need for natural fertilizer and at the same time, it puts nitrogen back into the soil. While it is very well adapted to grow in West Africa, it also has importance in other parts of the world, such as Asia, America and East Africa.

“For humans, we know that the cowpea seeds are processed into a number of popular types of food in West Africa. It is a very important source of protein for human consumption and it grows at a time of year when there is not much else available for people to eat.

“Much cowpea is grown in the north of Nigeria, for example, and much of it is brought down to the southwest of the country and is consumed in places such as Lagos, in the large centres of population. Sometimes, a part of the plant can be put back into part of the soil and in many instances, kept for livestock feed in places such as Mali where a lot of cowpea is grown.”

The conversation then moves to Michael’s thoughts on the major pests attacking cowpea plants today and finally, the broader challenges that lie ahead in Africa’s crop sector today.

“Cowpea can be damaged by quite a number of pests, the most important of which are aphids who extract juice from its leaves and stems while the crop is still a seedling and also spread the cowpea mosaic virus. As this is such a damaging pest, the farmers will use insecticides when they can afford to do so, so it is important to produce varieties of cowpea that are more tolerant to pests.

“In addition, the plants are also attacked by diseases caused by fungi, bacteria and viruses. Striga is the most important parasitic plant on cowpea and it can choke the growth of the plant at all stages and nematodes prevent the roots from absorbing nutrients and water from the soil. Cowpea is a type of crop that is very susceptible to a range of pests and diseases.

“Finally, I think that one of the priorities from the perspective of the IITA Genebank is to make all the 17,000 accessions we have more usable and to use new methods to characterise them. We need to know the genetic makeup of the traits they have so that they can be much more effectively deployed. Within the breeding programmes, we still have major challenges, such as the need to increase yields so that climate change can be adapted to and that pests and diseases can be resisted. On cowpea, we need to use diversity to understand the crop much better and to use it more effectively.”

Head of the IITA Genebank