Think tank finds learners that fail to get GCSE-equivalent qualifications by 18 years old often fail to recover, with cuts to adult learning meaning they become trapped in low-paid work

In its latest report, the Centre for Progressive Policy (CPP) warns that we must improve the way the skills system serves young people in education and adults in work if we are to drive inclusive growth.

CPP analysis finds that young people are struggling to navigate through the skills system and on into good work. For too many, low skill, low pay work remains their only option. Falling behind at an early age is hugely costly in terms of future progression and earnings potential: for learners who do not achieve a Level 2 qualification by the age of 18, almost three in five will not by the age of 25 either. These young people are then locked out of good work and decent pay.

Even for those able to gain a Level 2 qualification, progression routes to higher paying Level 3 qualifications are often unclear. Just 22% of those who completed a Level 2 apprenticeship in 2014/15 progressed to a Level 3 apprenticeship within 12 months. As such, an estimated 37,530 16- to 18-year-olds miss out on a £2,100 boost to their earnings in the first year alone.

In addition, too many adults in work lack the skills to progress out of low pay. This is compounded by a 34% decrease in public funding for adult skills and a fall of 6% in per employee private sector expenditure on training since 2011, leaving the UK languishing near the bottom of EU tables.

Our analysis also suggests significant local level variation in terms of positive engagement with the skills system. An adult completing a further education course in some areas of the country has more than a one in three chance of it leading neither to a sustained job nor further learning. In other areas, this chance is as low as one in 10. (see map below) 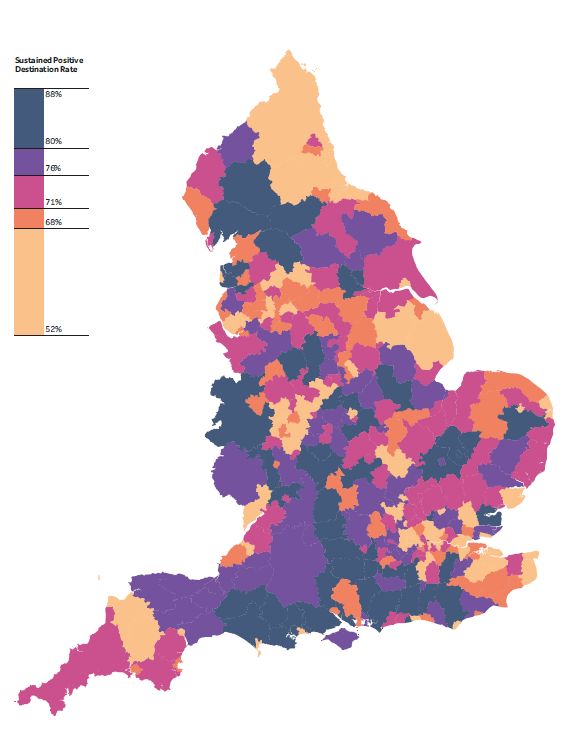 The report warns that history is at risk of repeating itself: low pay, low skill adults in the Midlands and North of England, as well as parts of Scotland, are expected to be worst affected – the same areas that were hit hardest by deindustrialisation in the 1980s.

The structure of the labour market is changing, and the skills system must react. CPP estimates that between 2015 and 2017 alone, 600,000 jobs identified as being at risk to automation and industrial change were lost, despite overall employment rising by 800,000.

A range of new policy instruments have been designed by government to respond to some of the challenges outlined in this report, including the proposed National Retraining Scheme, forthcoming T- level qualifications and Skills Advisory Panels. Yet, as currently formulated, these do not go nearly far enough. CPP is calling for a wide range of reforms, from raising the income threshold for access to fully-funded adult courses (up to the real living wage), to making local grant funding and business support contingent on providing good jobs.

“Despite many examples of excellent practise under ever-tightening financial constraints, our skills system is condemning too many people to lives of low pay and insecurity. We must better equip young people still in learning and adults in low-paid work with the tools they need to access high-quality employment and participate in the economic opportunities this country has to offer.”

“This important report sets out the investment our country sorely needs to make in helping people progress in education and skills. The current and future labour market requires people who can learn, adapt and be resilient to change. Sadly, many adults and too many young people entering adulthood have not got the skills and confidence to fit that description. Investment will help, but more than anything we also need to encourage a culture of lifelong learning underpinned by a policy of inclusive growth.”

Tom Hadley, Director of Policy at the Recruitment & Employment Confederation (REC), the professional body for the UK recruitment sector, said:

“There has never been a more important time to energise the debate around preparing future generations for the rapidly changing world of work. Employers and recruitment professionals can play a big role in building better bridges between education and work, but we need a skills infrastructure that better reflects the evolving needs of business and society. Equipping people with the right skills at the right time holds the key to unlocking inclusive growth and ensuring that employers can access the workers and skills they need in a post-Brexit UK jobs market.”

The Government has also announced funding of £695m for a new apprenticeship inniative as part of the new 2018 Budget.

Ben Rowland Co-Founder of Arch Apprentices commented: “Arch Apprentices are delighted by the government’s proposal to announce a £695m initiative to help small firms hire apprentices, with their proposed contribution now reduced from 10% to 5%. We have been strong advocates of the apprenticeship reforms that the Government has introduced, and truly believed that they will have a big impact on resolving the growing skills gaps in the UK.

“It’s brilliant that the government are taking steps to reinforce apprenticeships as the way to boost skills and productivity and we hope employers will increasingly recognise them as an opportunity to accelerate their business performance and bring new life to their teams. Apprenticeships have been proven to create enthusiastic, loyal employees who report greater levels of satisfaction and are more likely to stay at the company long after their apprenticeship has finished.

“The UK is facing major issues surrounding productivity and a lack of skilled workers. We see the government’s belief in apprenticeship as the real solution to these problems. Through these changes, we will train a workforce fit for any future.”