Hannah Alexander, Junior Data Scientist at Ascent, shares her journey into data and gives insight for young women to join the tech movement early on and revolutionise female data science

I remember reading an article in Harvard Business Review back in 2012 where data science was dubbed the “Sexiest Job of the 21st Century”. It comes as no surprise that, with booming investment in AI development, the demand for highly-skilled data scientists has risen dramatically in the past 10 years. However, for the majority of my peers who are pondering GCSE, A level or university options, data science is not an attractive career choice – nearly 50% of female STEM students think data science is too theoretical and low-impact, whilst only 55% are well- informed about various opportunities within the field.

This is a statistic that really resonates with me, as at the beginning of my career, I had no idea what I wanted to do after my A-levels. I thought I could be an architect, and, through various trials, that path eventually led me to data science. I ended up studying Civil Engineering at the University of Bath, where there was a 40:60 female/male ratio, so companies that are looking to hire fantastic data scientists need to invest in this talent pool as early as possible!

What is data science and how to break into it?

Data science may not sound particularly exciting. However, there is much more to it than meets the eye! It’s all about solving real-world problems with data, and despite many people assuming that in order to become a data scientist you have to master deep learning, linear algebra or complex programming, that’s not the case.

At the beginning of my journey, coding wasn’t my strongest skill, but I was very interested in it and ended up doing my dissertation on coding and modelling. However, the most useful skill to have in this field is definitely communication – the storytelling behind the data is critical, so it’s not just about being analytical.

There are no expectations that you’ll be a fully-fledged data scientist from the very beginning, and you learn a lot of it on the job. You gain a lot of new skills through training courses on modelling and Cloud certifications as well as through using Jira and Git for version control.

What can companies do to improve female data science?

I was very lucky to start with my company as a graduate and, after working on some interesting projects with various civil servants and contractors for two years, I was promoted to a Junior Data Scientist. However, not many students are aware of this field, and, as a consequence, 46% of UK companies have been struggling to recruit data scientists in the past two years.

Companies can work together with schools and universities to really drive the messaging early on through open days, university schemes or tech bootcamps. There is a big difference between learning in principle and applying in practice, and for those people who do learn data science in an academic setting, there should be more emphasis on solving real-world problems. This can be achieved by companies providing schools and universities with tech challenges where students can use their existing knowledge and research skills to solve real data issues. This would not only spark interest in data science for people who otherwise would have never considered this career path, but could also highlight some talented prospective employees for these companies.

“Data science may not sound particularly exciting. However, there is much more to it than meets the eye! It’s all about solving real-world problems with data, and despite many people assuming that in order to become a data scientist you have to master deep learning, linear algebra or complex programming, that’s not the case.”

And, most importantly, I think there should be more female role models in the tech field. I am lucky enough to have a female manager, who has been my mentor ever since I started in data science, and it’s great to work with someone you aspire to be like in the future! But there are still not enough women in our field – in 2020 only 15% of data scientists were women, and that gap continues to widen in senior roles. It’s challenging to be inspired to join a field where you might end up being the only female on a project…

It is predicted that data science will see more growth than almost any other field by 2029, so I really hope that more companies will see this as an opportunity to inspire younger generations, and especially females, to join this rewarding, fast-paced and rapidly evolving data and AI movement early on. 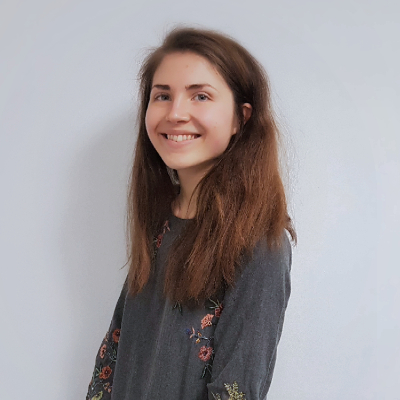