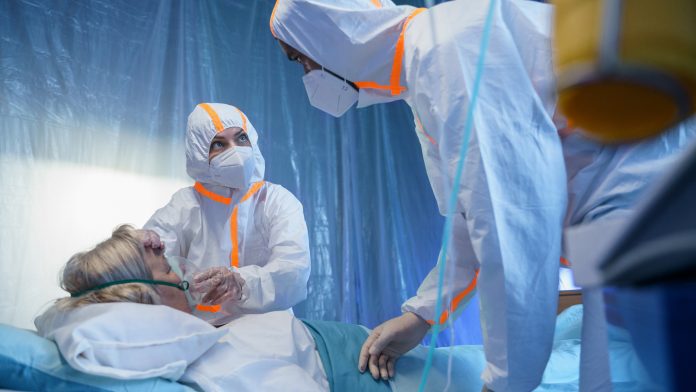 An analysis conducted by US researchers shows 30% of healthcare personnel in more than 2,000 U.S hospitals remain unvaccinated against COVID-19

As of September 2021, Centers for Disease Control and Prevention (CDC) revealed data that 3.3 million healthcare personnel (HCP) in the U.S remain unvaccinated.

With vaccination rates increasing from 36% to 60% between January and April 2021, they then began gradually slowing substantially, reaching 70% as of September 2021.

Hannah Reses, MPH, a member of the CDC team that conducted the analysis and the paper’s lead author said: “Our analysis revealed that vaccine coverage among U.S. hospital-based HCP stalled significantly after initial uptake.

“Additional efforts are needed now to improve HCP vaccine coverage and reduce the risk of SARS-CoV-2 transmission to patients and other hospital staff.”

The researchers evaluated data voluntarily reported to the Department of Health and Human Services (HHS) Unified Hospital Data Surveillance System on COVID-19 vaccination coverage among HCP in hospitals between January 2021, and September 2021.

HCP who did not want to be vaccinated often reported low trust in the government. Contrary to this, trust in information received from medical professionals was higher.

This suggests the important role of medical organisations have to improve vaccine uptake among HCP, and combat misinformation that might impact decisions.

The number of facilities included in the analysis allowed the researchers to measure vaccination rates by hospital type and the characteristics of the county in the hospitals location, for instance, rural vs. metropolitan areas.

While vaccination coverage increased by 5% from April to August 2021, it increased another 5% in just one month from August through to September.

It is suggested this increased rate may be a response to rising COVID-19 rates, as well as stress from the rising Delta variant. This increase in vaccination uptake may also be due to vaccination mandates implemented by government in some areas.

“HCP are at greater risk for acquiring and transmitting COVID-19 in hospitals, as they have direct contact with patients”

“The findings from this analysis suggest that vaccine mandates as well as investment in additional educational and promotional activities could help increase vaccine coverage among HCP to better protect public health.”

Published in the December issue of the American Journal of Infection Control (AJIC), the journal of the Association for Professionals in Infection Control and Epidemiology (APIC), this study is the most comprehensive assessment of vaccination rates among U.S. hospital personnel conducted to date.