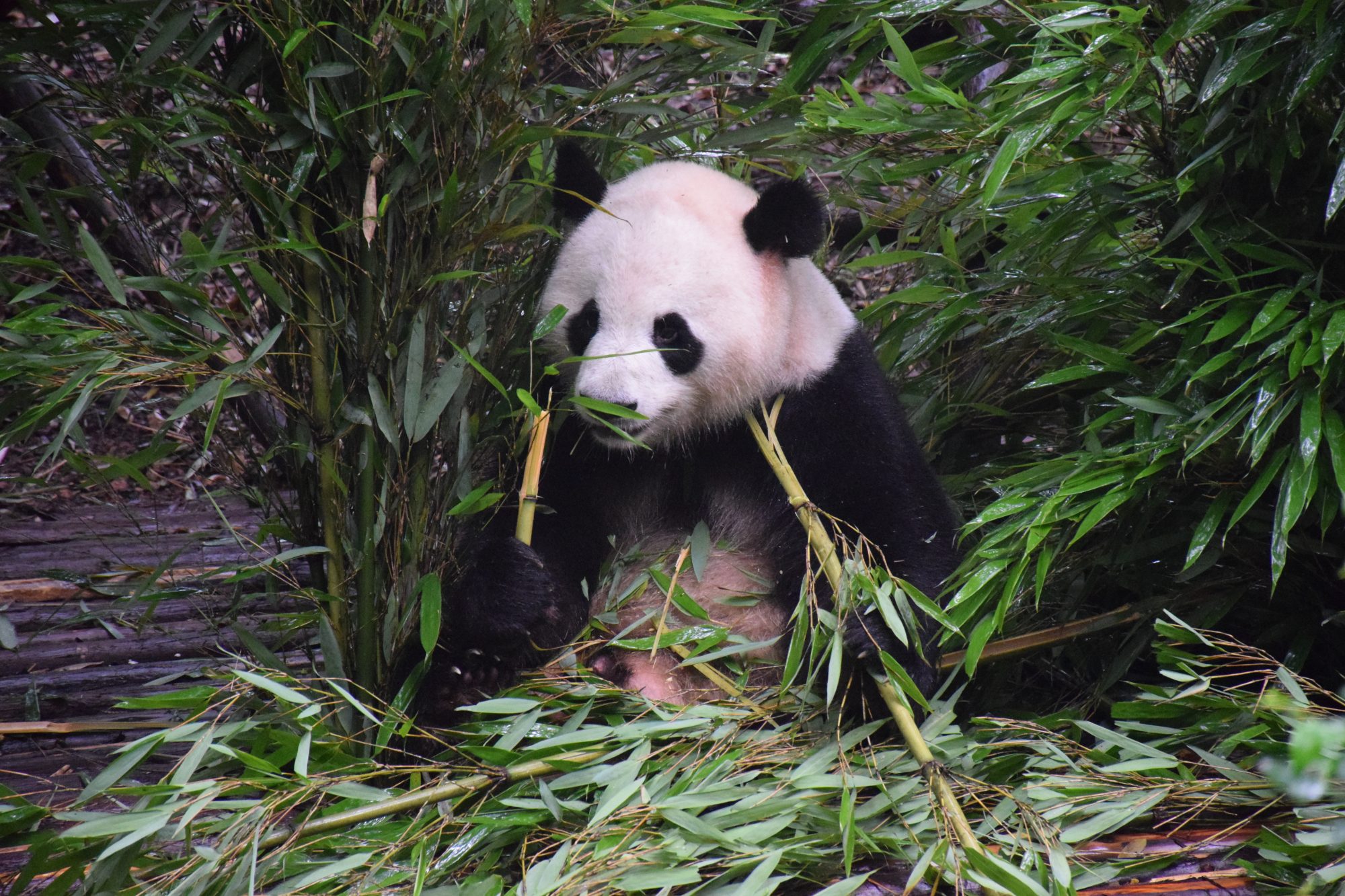 Pandas survive on a diet of bamboo, despite being bears. Why is this? The panda’s long evolutionary history offers an answer

“Deep in the bamboo forest, giant pandas traded an omnivorous diet of meat and berries to quietly consuming bamboos, a plant plentiful in the subtropical forest but of low nutrient value,” says NHM Vertebrate Paleontology Curator Dr. Xiaoming Wang. “Tightly holding bamboo stems in order to crush them into bite sizes is perhaps the most crucial adaptation to consuming a prodigious quantity of bamboo.”

The panda has a thumb, of sorts. In actual fact, it’s a thumb-like digit from a wrist bone, the radial sesamoid. The panda never developed a proper thumb. Instead it’s an elongated wrist bone evolved to grasp bamboo.

This unique adaptation helps these bears subsist entirely on bamboo despite being bears (members of the order Carnivora, or meat-eaters). In a new paper published in Scientific Reports, the Natural History Museum of Los Angeles County’s Curator of Vertebrate Paleontology Xiaoming Wang report that the earliest bamboo-eating ancestral panda too had this “thumb.”

Interestingly, the thumb-like digit is longer than its modern descendants

While we have long celebrated the false thumb in living giant pandas (Ailuropoda melanoleuca) for more than 100 years, we did not know how this wrist bone had evolved due to a near-total absence of fossil records.

But following the discovery of a a fossil false thumb from an ancestral giant panda dating back 6-7 million years ago at the Shuitangba site in the City of Zhaotong, Yunnan Province in south China, we can now explain how the panda has survived on a diet of bamboo.

This fossil gives scientists a first look at the early use of this extra (sixth) digit ,and the earliest evidence of a bamboo diet in ancestral pandas, helping us better understanding the evolution of this unique structure.

Another question we have long pondered: why are their false thumbs so underdeveloped?

As an ancestor to modern pandas, Ailurarctos might be expected to have even less well-developed false “thumbs”, but the fossil Wang and his colleagues discovered came as a surprise. The fossil has proven that the ancient pandas had a longer false thumb with a straighter end than its modern descendants’ shorter, hooked digit.

So why did pandas’ false thumbs stop growing to achieve a longer digit?

“Panda’s false thumb must walk and ‘chew’,” says Wang. “Such a dual function serves as the limit on how big this ‘thumb’ can become.”

Wang and his colleagues think that modern panda’s shorter false thumbs are an evolutionary compromise between the need to eat bamboo and the need to walk. The hooked tip of a modern panda’s second thumb lets them manipulate bamboo whilst walking to the next bamboo meal. The thumb is doing double duty as the radial sesamoid – a bone in the animal’s wrist.

“Five to six million years should be enough time for the panda to develop longer false thumbs, but it seems that the evolutionary pressure of needing to travel and bear its weight kept the ‘thumb’ short-strong enough to be useful without being big enough to get in the way,” says Denise Su, associate professor at the School of Human Evolution and Social Change and research scientist at the Institute of Human Origins at Arizona State University, and co-leader of the project that recovered the panda specimens.

“Evolving from a carnivorous ancestor and becoming a pure bamboo-feeder, pandas must overcome many obstacles,” Wang adds. “An opposable ‘thumb’ from a wrist bone may be the most amazing development against these hurdles.”