While gumboots won’t ever be required for exploring the Moon, recent research has shown that there are areas where water may exist, mostly in the permanently shadowed regions (PSRs) near the lunar poles.

Renewed interest in robotic and human missions to the Moon has warranted a review of the current categorisation and requirements to focus on these regions, a task that the COSPAR Panel on Planetary Protection tackled in June 2021.

In the post-Apollo era when the first analyses of the samples returned indicated that the Moon was too dry for any biological activity or even for prebiotic chemistry, and hence not of direct interest for understanding the process of chemical evolution or the origin of life, our satellite was placed in protection Category I. But with a new, better-documented assessment since 2008, the Moon was assigned Category II in the COSPAR Planetary Protection Policy (bodies where “there is significant interest relative to the process of chemical evolution and the origin of life, but where there is only a remote chance that contamination carried by a spacecraft could compromise future investigations”).

Even as recently as October 2020, observations of the Moon with the NASA/DLR Stratospheric Observatory for Infrared Astronomy (SOFIA) revealed an emission feature at high southern latitudes due to the presence of molecular water in Clavius Crater, in the Moon’s southern hemisphere. Although confined to a small latitude range, this is an important finding, showing that the distribution of water is a result of local geology and probably not a global phenomenon. There was also a suggestion that most of the water detected must be stored within glasses or voids between grains sheltered from the harsh lunar environment, allowing the water to remain on the lunar surface, where it could be found.

These findings demonstrate the need to ensure that studies of lunar chemical evolution, particularly for regions where water may exist and for the volatiles available in cold traps, are conducted in a safe mode. These regions have relevance to the broader solar system science as analogs for volatile and water availability in comets, asteroids and other small bodies, and also for the formation of inner planets in our solar system and beyond, not to mention human settlements. Enhanced interest in exploration by space agencies, and now the private sector, is therefore unsurprising.

The need for sustained lunar exploration

The COSPAR Panel on Planetary Protection (PPP) has thus recently issued a set of new Policy recommendations concerning the exploration of our satellite focusing on specific regions.

After consulting the scientific community and various stakeholders, COSPAR PPP identified the need for sustained lunar exploration efforts in a controlled mode and acknowledged the need for a change in the Policy. The Panel has thus recommended – and the COSPAR Bureau validated in June 2021 – an update to the Policy with: 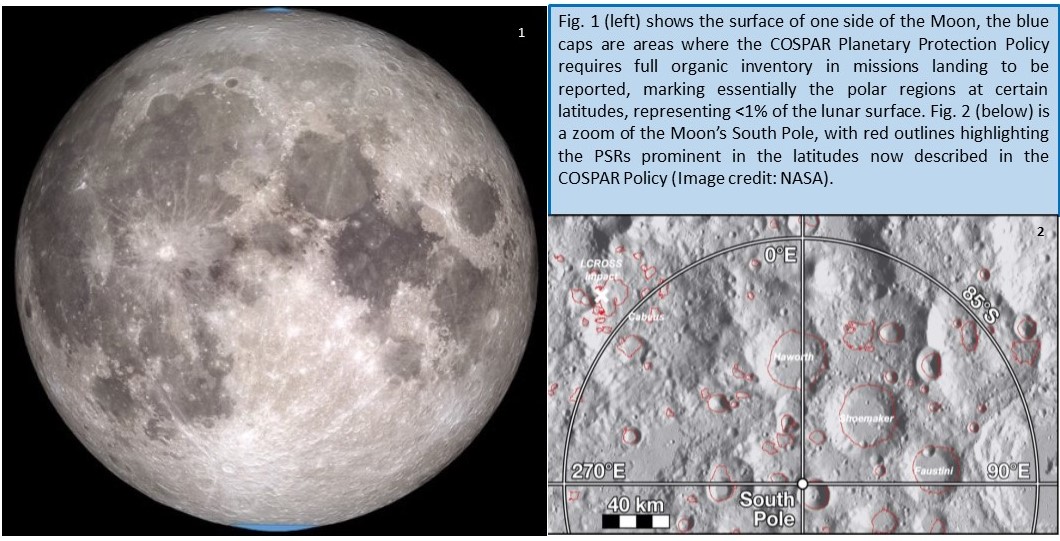 The Moon offers unique opportunities to study solar system history, the geologic processes within, while also being an object of exceptional interest in itself with features such as its exosphere, the polar regions, and a chance to perform original astronomic observations from a special platform.

Our satellite is of immense scientific importance as a reference planetary body, not only because of its commonality with our planet, but also because of easy access to an ancient surface that holds exciting testimonies to the record of life-related chemistry in the solar system and to important physics, among others, on space-surface interactions. The whole Moon surface environment allows for experiments in reduced gravity and radiation on biological models in view of future long-duration human exploration.

Further robotic and human lunar exploration could help us find answers to many outstanding questions related to fields such as bombardment, volcanism, impacts, atmospheric and dust environment, astrobiology and life sciences. No wonder that polar volatiles studies at the Moon are a priority for many in the scientific research community.

It is important to note that neither the previous categorisation nor the new one prevents any landing on the Moon or access to any region on the Moon. On the contrary, COSPAR’s Policy is there to ensure sustainable robotic and manned exploration of our satellite by international multi-component or national projects.

Even if not deemed dangerous in the case of the Moon, any return of samples to Earth (from Mars, its satellites, the icy moons, etc) needs to comply with the guidelines put in place by COSPAR, in particular so as to protect our biosphere from any alien hazardous returned material.

This is why it is important for all space missions, regardless of category, to report to COSPAR, even for simple documentation. Details of documentation required for reporting and defining organic inventory (i.e. list of materials on the spacecraft, including volatiles released by a propulsion or life support system) can be found in the COSPAR Policy on Planetary Protection.

The COSPAR Panel also noted that there is strong need for community input on science research reserves like the PSRs and invites scientists to organise this research and provide additional knowledge.