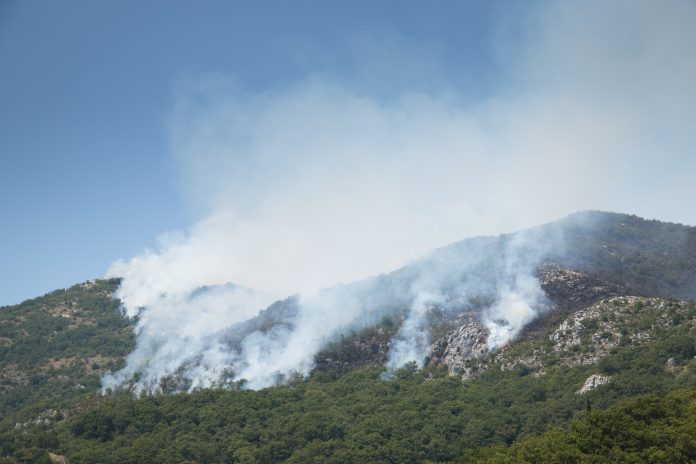 Despite increased preparation for these fires in the EU, around 340,000 hectares of land – an area 30% larger than Luxembourg – was burnt across Europe in 2020 according to the Joint Research Centre (JRC).

2021 has been no better, with up to 500,000 hectares of land already burnt throughout Europe, including 25% of ‘Natura 2000’ sites, which are EU reservoirs of biodiversity. The large fires predominantly extended across the Mediterranean region this summer.

Fires burned in winter over the Danube delta and in the Pyrenees, and in spring mainly in the Balkan region. During summer and autumn, the most affected were the Mediterranean countries, specifically Spain and Portugal, which recorded the largest fire events in the EU for 2020.

The EU has increased its facility this year to support countries through the burning seasons, but the observable trend denotes fires have worsened, in levels of danger, longer fire seasons and intense fast spreading ‘mega fires’, on which traditional firefighting means have little power.

This evident impact of climate change is further displayed this year, as around 130,000 hectares were already burnt by the end of June, which usually marks the traditional start of the fire season. Consequently, fires no longer solely affect southern states, and are becoming a growing threat for central and northern Europe too.

Over nine out of ten fires in the EU are caused by human actions, displaying the need for raised public awareness and educational campaigns about fire risks.

What are the key findings of the report?

Commissioner for Innovation, Research, Culture, Education and Youth, responsible for the Joint Research Centre, Mariya Gabriel, said: “Climate change is increasing the risk and the magnitude of wildfires around the world. Since 2016, the unprecedented fires that have happened globally show a behaviour and intensity that was never experienced before.

“We have seen our forest growing in the EU over the last decades and we need to preserve them more than ever to heal our planet. The JRC and the European Commission are mobilising science, technologies, policies and cooperation to prevent these massive fires, safeguard our forests, preserve biodiversity and, above all, protect lives in the EU and beyond.”

What is being done to prevent these fires?

The EU has frequently made attempts to work to prevent wildfires, preserve forests and recover biodiversity. Its science hub has formed the European Forest Fire Information Systems (EFFIS), which provides countries a platform to converse practices to prevent fires, restore eco systems and manage fires on an inter-governmental level.

Additional to monitoring fires from satellites, the annual JRC reports helps to build on the EU biodiversity strategy for 2030, a part of the initiative of the European Green Deal. The Commission further proposed the latest EU Forest Strategy for 2030, to promote forest protection and resilience.

Commissioner for the Environment, Oceans and Fisheries, Virginijus Sinkevičius, stated: “Changing climate is making an impact on the length and severity of the fire season, endangering more lives and taking the toll on nature. Today’s report shows how devastating the last year has been, and as shown by data from this year. The European Commission has adopted a new EU Forest Strategy to increase the resilience of forests in Europe.

“Healthy and resilient forests and land that is managed in a way that protects biodiversity and people is crucial to mitigate the impact of wildfires. That’s why we’re working with partners and national authorities to establish land-based wildfire prevention as a norm.”