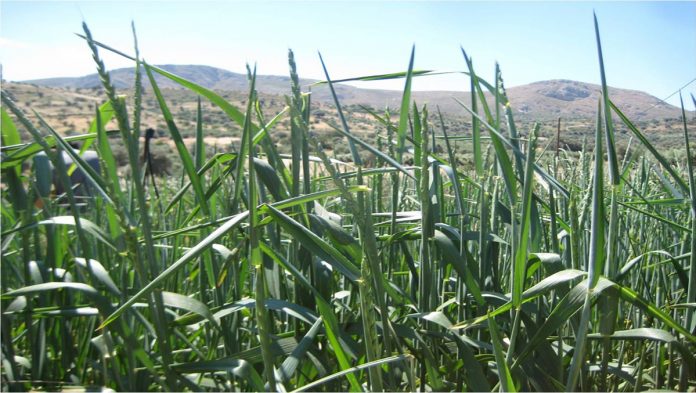 Nikolaos Volakakis of Geokomi plc and Leonidas Rempelos of Newcastle University present results from the experiments concerning low-input minor cereal production systems funded under the HealthyMinorCereals project and conducted in southern Crete, Greece – a typical semi-arid region of the Mediterranean

With cereal products being the most important source of nutrients and energy in the human diet and wheat being the most consumed crop globally, also the consumption of hulled wheat such as spelt (Triticum spelta); emmer (Triticum dicoccum); and einkorn (Triticum monococcum) has recently substantially increased. Re-introduced to the European market as ‘superfoods’, consumers associate spelt, emmer and einkorn with superior nutritional composition and a lower risk of wheat/gluten incompatibility symptoms compared to common wheat (Triticum aestivum). As a result, hulled kinds of wheat gained widespread popularity, making their way as common wheat substitutes in artisan bread and other bakery products, pasta and breakfast cereal. Among organic farmers, they are valued for their ability to grow well under low inputs.

Spelt wheat known as ‘’Dinkel’’ in German or ‘’Olyra’’ in Greek cultivated since approximately 5000 BC, has been an important crop for human nutrition in many regions of Europe, from the Bronze age up to the medieval times. After the introduction of potato into Europe, it remained as a staple food and minor cereal crop in Central Europe and northern Spain. Spelt is a hexaploid wheat that can easily be crossed with common wheat in which case its botanical name used is Triticum aestivum subsp. spelta. As a result, many “modern” high-yielding “spelt” varieties grown in Central and Northern Europe are crosses between common and spelt wheat genotypes. It is believed that varieties from these T. spelta x T. aestivum crosses have grain with a lower nutritional value compared with the traditional, “pure” spelt varieties.

Although hulled kinds of wheat, such as spelt were previously grown in semi-arid regions, traditional varieties have been lost since their cultivation was replaced by common wheat in most Mediterranean regions (including Greece). Hence there is no agronomic knowledge (for example, regarding optimum sowing and harvest dates, tillage/mechanical weed control, fertilisation and crop protection) needed to optimise the performance of those cereal crops in the semi-arid regions of the Mediterranean.

The research objectives of our study were, therefore, to:

Fertilisation: Chicken and sheep manure resulted in similar grain yields (Fig.1b) and lower lodging levels than mineral NPK fertiliser. This was surprising but may suggest that under semi-arid growing conditions organic fertilisers may deliver additional benefits (for example, related to water availability and/or prevention of nutrient losses) compensating for the greater availability of N, P and K from mineral fertiliser inputs. It was found that mineral fertilisation significantly increased the protein content in grain but had no substantial impact on the mineral and antioxidant concentrations in spelt grains.

Variety choice: Modern spelt varieties (Filderstolz and ZOR) had lower lodging levels, produced higher yields (Fig 1c) but had lower grain protein concentrations than the older varieties (Oberkulmer and Rubiota). The variety choice had a substantial effect on the nutritional composition of spelt grain, especially with respect to antioxidant concentrations and activity. The modern varieties had significantly higher total phenolic acid and flavonoid concentrations, as well as antioxidant activity. Relatively small differences in mineral composition between the varieties were detected.

This project has received funding from the European Union’s Seventh Framework Programme for research, technological development and demonstration under grant agreement n° 613609. The views expressed in this publication represent only the views of the authors. The European Union is not liable for any use that may be made of the information contained therein.