In the previous article in this series1, the fusion approach, Plasma-Jet-Driven-Magneto-Inertial-Fusion (PJMIF) was briefly introduced and described. We now report on the current status of its development.

While coaxial plasma guns have been used to accelerate plasma since the 1950’s, notably in space propulsion as plasma thrusters, the challenges of applying plasma guns as a driver for fusion are unique. The mass density and momentum flux density (the ram pressure) of the plasma jets required for fusion application is typically several orders of magnitude higher than for conventional applications. The jet Mach number (ratio of directed jet speed to internal sound speed) needs to be greater than ten so that the jet avoids excessive expansion, and the liner formed from the jets are highly compressible, while plasma jets launched by conventional plasma guns have Mach number of the order of unity. The jet-to-jet variation in mass, mass density, velocity, temperature and the arrival time of the jets at a particular radius of the reactor chamber needs to be very low.

Our initial 3D computer simulations show that jet-to-jet variation in mass of no more than 5% can be tolerated to maintain good symmetry and peak pressure; we may eventually find that even lower jet-to-jet variations will be required. A stringent requirement is the compactness of the jets. An aspect ratio of the jets (length-to-diameter ratio) of less than unity is required for high energy gains required for a fusion power plant. A typical aspect ratio of jets launched by conventional plasma guns is 10 or more.

The coaxial plasma gun developed by HyperV Technologies and Hyperjet Fusion is shown above. It consists of the following elements:

The following component technologies have been demonstrated:

a. A gas valve that can open and close in 600 µs, driven by a capacitor storing about 1 kJ of energy, and dispense a controlled amount of argon gas up to 1 mg or more with a mass variation of less than 2% from valve to valve;

b. A pre-ionization system that uses an array of 20 capillary discharges with about 1 kJ of stored energy

c. A switching and triggering system that limits the gun-to-gun variation of the launch time of the jets to about 1 µs

d. launching an argon plasma of up to 1 mg to velocities exceeding 50 km/s with an energy efficiency of about 25% and;

e. A plasma jet with a density exceeding 1016 ions/cm3 over a length of about 10 cm but with a total length including a lower-density tail of about 1 metre.

A conical array of 7 guns have been installed on the Plasma Liner Experiment (PLX) at Los Alamos National Laboratory (LANL), and experiments to merge the jets launched from these guns to form a piece of the plasma liner have been performed. The initial results8 show the formation of a series of shocks between merging jets, in qualitative agreements with our 3D computational results. 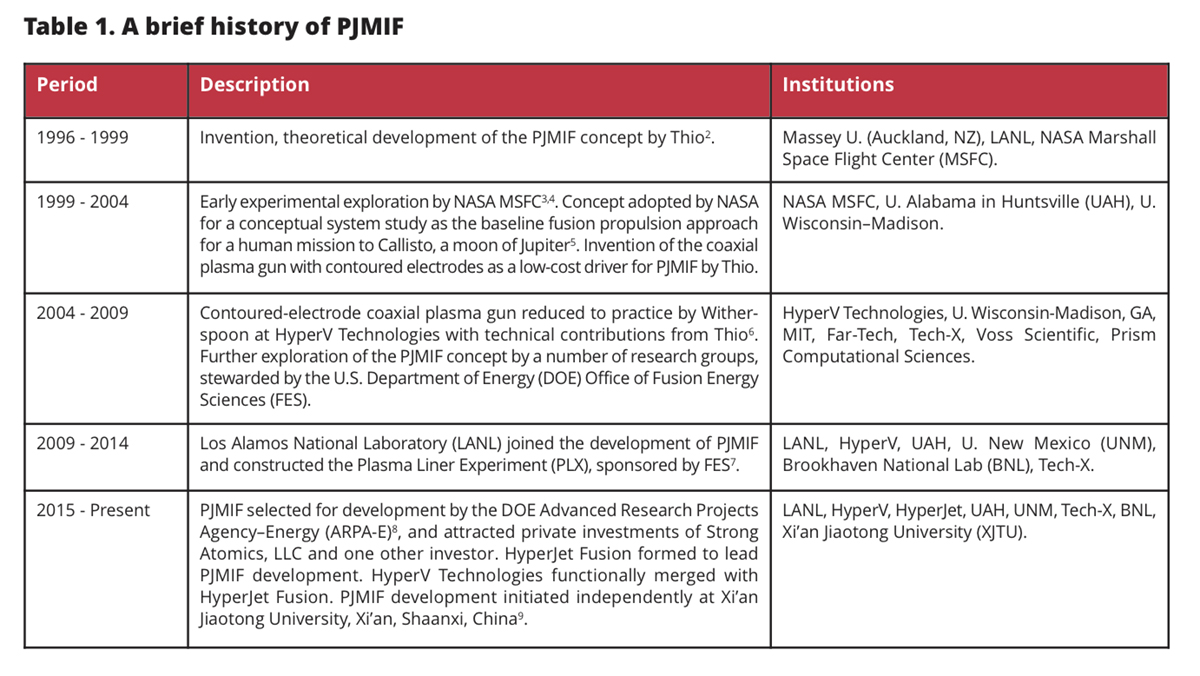 The experience with the first version of the coaxial guns indicates that considerable improvements on the gun are necessary to field 36 guns in a spherical array to perform a high-quality liner-formation experiment. Development is in progress at HyperJet Fusion of an upgraded coaxial plasma gun to improve on the earlier gun-performance metrics as follows:

a. To reduce the open-and-close time of the gas valve;

b.To reduce the energy required to drive the gas valve to below 0.2 kJ;

c. To have a pre-ionization system that is more convenient and efficient and;

d. To reduce the total length of the jet including the low-density tail by more than a factor of two and increase the density by a corresponding factor over the densest part of the jet.

Our plan is to field 36 of the upgraded plasma guns on PLX at LANL during 2019 to experimentally demonstrate a fully spherical imploding plasma liner and obtain data on liner ram-pressure scaling to benchmark our models and codes.

In the next article in this series, we will present more details of the results of our preliminary experiments on merging a conical array of plasma jets we have performed so far and describe in more detail the planned 36-gun experiments on PLX, which will be the world’s first attempt at merging an array of plasma jets to form and study a spherically imploding plasma liner.