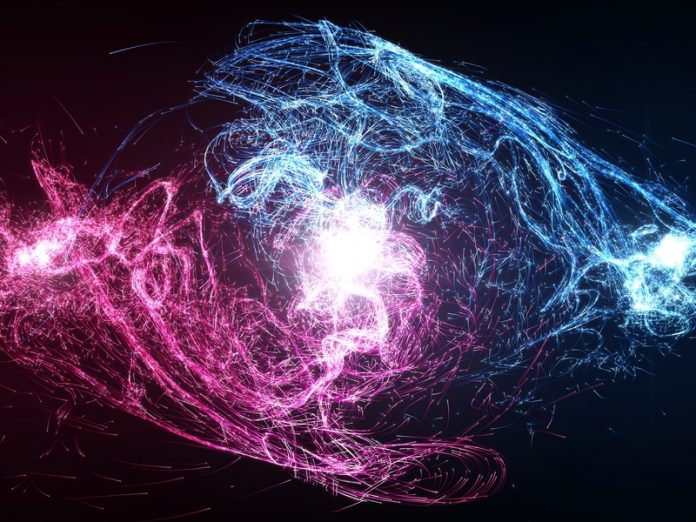 In the previous article in this series1, we reported on the plasma physics reasoning showing there is a sweet spot in the fusion parameter space with a density of the burning plasma intermediate between the two extremes typified by the two conventional approaches to fusion, namely magnetic confinement fusion (MCF) and inertial confinement fusion (ICF).

The parameter space of MIF is very broad. MIF covers a density range for the burning plasma from 1024 deuterium-tritium ions per m3 to 1029 per m3. In terms of the implosion velocity, it ranges from 1 km/s to more than 100 km/s. The liner may be solid, liquid or gaseous. The many combinations of the key parameters for the target and the liners give rise to a rich and potentially large portfolio for MIF, presenting ample opportunities for innovations in the field.

At HyperJet Fusion Corporation, our goal is to develop economical fusion power, through a systematic exploitation of the broad principles of MIF, without regards to the particular choice of liners and targets. Our pursuit at present focuses on the use of hypersonic plasma jets as the main driver due to its several attractive attributes that may enable rapid progress in our quest. The fusion approach is called Plasma-Jet-Driven Magneto-Inertial-Fusion (PJMIF)2,3. Los Alamos National Laboratory is our partner in this development, together with several universities and institutions. 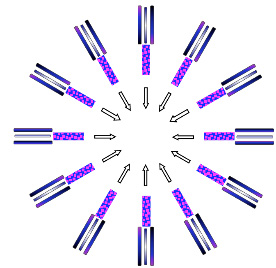 In PJMIF, a magnetised target plasma is first formed at the centre of an otherwise vacuum spherical vessel. A spherical array of hypersonic plasma jets, up to perhaps 600 in total, with velocities up to about 100 km/s are launched from the periphery of the vessel, which has a radius of about 3 m. The plasma jets merge at a radius of about 1.5 m to form a plasma liner that continues to converge towards the centre and compresses the pre-formed magnetised target plasma down to a diameter of approximately 1 cm when fusion burn occurs in the target. The fusion burn lasts for about 0.3 µs resulting in a micro-explosion and a burst of energy. Because the efficiency of the plasma guns may be as high as 50% or more, the fusion gain needed for a practical fusion power plant may be as low as 20 or less. A thick liquid wall (FLiBe for example, approximately 1 m thick) contained between two concentric spherical walls is used as a blanket to absorb the fusion neutrons, transforming their kinetic energy into heat and to breed tritium by an exothermic nuclear transmutation to feed the fusion reactor. The liquid wall also serves as a coolant in a heat exchanger to extract the heat from the fusion reactor to generate electricity. Each pulse of the fusion burn produces about 500 MJ of energy. If the pulse is repeated at 1 Hz, approximately 500 MW of average thermal power is produced. Because the cost of recycling the plasma guns and the first wall is relatively low, the PJMIF reactor vision allows for the guns and the first wall to be replaced and recycled after approximately every 20 million shots (~7 months)4.

Why are plasma liners and PJMIF among other choices of liners (solid, liquid) and drivers (z-pinches, lases) for MIF?

Solid-liner MIF typically employs a hollow cylindrical aluminium shell with a diameter of ~10 cm, thickness of ~1 mm and ~30 cm long. The advantages of the solid liner are that the technology of imploding a solid liner is relatively matured, the liner is extremely compact and has a high Mach number and the implosion can be made to follow a low adiabat, leading to high hydrodynamic efficiency. With a modest a radial convergence, the implosion is also hydrodynamically stable. 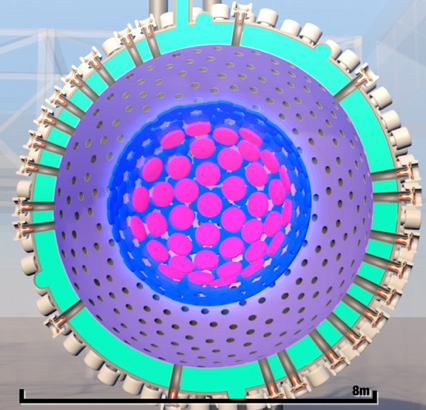 However, the solid liner is imploded at a relatively low velocity of about 5 km/s to 10 km/s. The implosion time is thus about 5 to 10 µs, with a plasma density of about 1024-26 per m3. For the heating of the target plasma to be adiabatic, the timescale for the loss of heat from the target plasma (its thermal timescale) should be greater than 50 to 100 µs, which is a challengingly long thermal timescale for the density and size of the magnetised plasma targets currently known. Initial target plasma diameter much larger than 10 cm may be required to match the thermal timescale to the implosion velocity, increasing the overall cost of the reactor. Furthermore, the implosion produces debris, leading to low shot rate and high cost per shot during R&D.

Diagnostic access to the target plasma is also challenging, due to the opacity of the liner to most diagnostics. These factors tend to limit the rate of progress in R&D. Hardware destruction makes implementing solid-liner driven MIF as an economical, repetitively pulsed, commercial fusion reactor a real challenge.

Liquid-liner driven MIF uses a liquid metal vortex to compress a magnetised target plasma. The liquid liner is imploded by pistons driven by very low-cost compressed gas in a favourably distributed configuration. The liner is non-destructive and is capable of high shot rate and doubles as a protective blanket against the fusion neutrons and a tritium breeding blanket, as well as a primary-loop coolant in a heat exchanger for the extraction of the fusion energy for electricity generation. Rotation of the liquid liner in a vortex further stabilises the implosion against hydrodynamic instability. The liquid liner is also massive and is capable of providing long plasma containment time during fusion burn. However, the implosion velocity is limited to about 2 km/s or less, even slower than in the case of the solid liner, thus requiring an even larger initial magnetised plasma target, resulting in a larger cost for the reactor. The liquid liner directly faces the fusing plasma, creating the potential for severe disruption and a mix of the liquid vortex with the imploding plasma and as such, both may be highly detrimental to the fusion burn. Similar to the solid liner, diagnostic access to the target plasma during R&D is also challenging due to the opacity of the liner to most diagnostics. The lower density of the target plasma necessitated by its larger size may lead to plasma instabilities that cause a turbulent and anomalously high rate of thermal losses, further exacerbating the adverse consequences of the low implosion velocity.

In PJMIF, implosion can be accomplished with suitably high velocity from 50 km/s to over 100 km/s with the implosion energy and momentum generated in a distributed manner. The high implosion velocity overcomes target heat loss with relatively small targets. It allows high-density targets thus avoiding plasma instabilities that may lead to anomalously high thermal losses. The plasma guns are relatively inexpensive. Like the liquid liner, it produces no hardware debris, thus enabling high repetition rate and low cost per shot for commercial fusion power plant, as well as high shot rate during R&D to provide high data rate for rapid resolution of scientific and technological issues. The spatial and temporal scales of the implosion and the open geometry allow convenient access for diagnostics. Because of these attributes, rapid progress at relatively low costs in R&D is possible. Its main disadvantage is that being the newest fusion approach, it is at a very early stage of development. Technically, the main challenges are the development of the appropriate plasma accelerators (guns) to deliver plasma jets with the required density, velocity, Mach number and precision in mass, velocity and launch synchronisation, to form a plasma liner with suitable uniformity to limit the amplitude of hydrodynamic instabilities and developing the magnetised target plasma with the required high density.

An attractive feature of the PJMIF concept is that its component technologies have near-term commercial spin-offs including the making of metallic powders for additive manufacturing, thermal spray and medical isotopes, as well as the processing of nuclear wastes.

In the next article, we will report on the state of the development of the PJMIF approach.