Luis García-Tabarés from CIEMAT, as Technical Manager in the H2020-funded SEA-TITAN, tells us what we need to know about the first of a kind superconducting direct drive power take off

According to the European Marine Energy Center (EMEC), 32.55% of the wave developers are focused on the Point Absorber technology, converting the linear motion (up-down) of a floating structure relative to a fixed or floating base into electrical power. One of many advantages of Point Absorbers is that they are very suitable for using Direct Drive Power Take Offs (PTOs) to perform the energy conversion process in a single stage, making them very efficient.

At the same time, it is quite intuitive to realise that the forces required in this conversion process are very high. For instance, for a 10 s period wave of 2 m in amplitude, the peak vertical velocity would be 0,4 m/s. If a peak power of 1 MW is required, a peak force of 2,5 MN would be needed.

When such big forces must be produced using electrical machines, superconductivity becomes an interesting option to be implemented in the PTO technology.

Ultimately, a high force machine means a high current machine for what a superconducting option can be almost indispensable. Besides, there is an additional consideration in favour of a superconducting version which is the higher efficiency, something which is also indispensable to harvest energy when high reactive forces are involved. A higher force and efficiency imply a bigger power capture as shown in Figure 1. The real case (left side), represents the power than can be harvested with a 1MN non-superconducting machine having a 75% of efficiency (yellow curve) with respect to the maximum theoretical value (red curve), while the ideal case  (right side) shows the harvested power with a 1MN machine 98% efficiency (superconducting). In both cases this magnitude is calculated for different wave periods and 1m wave heigh. While in the first case the theoretical power is achieved for a very narrow wave frequency band, for the second one, the maximum theoretical power can be achieved for a much wider frequency band. The maximum theoretical required force (blue curve) and the actual exerted force by the PTO (green curve) are also shown.

All these considerations lead to include in the SEA TITAN project the conceptual design of a superconducting PTO based on two considerations:

2) The utilisation of MgB2 superconductors since they are especially adequate for this purpose. 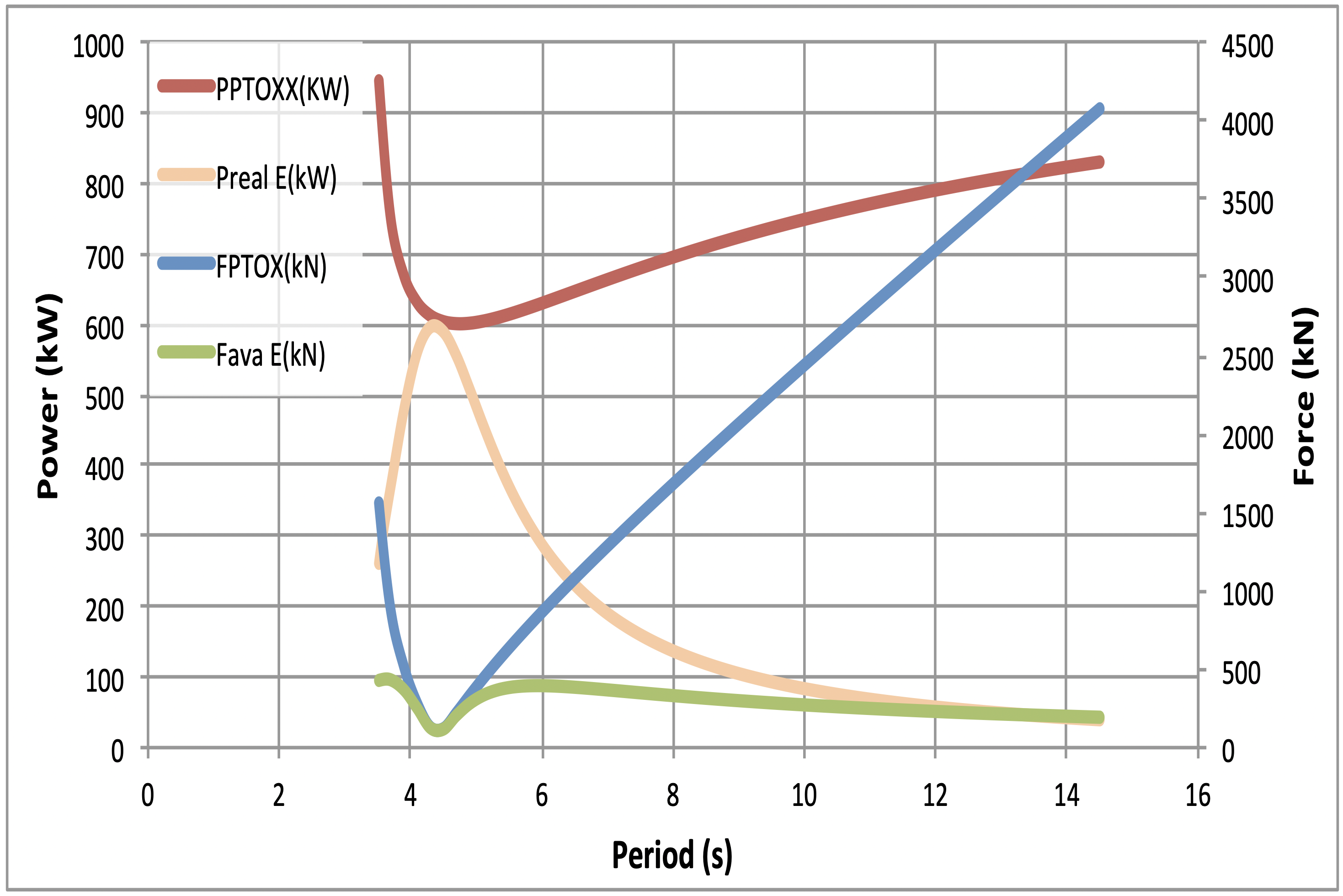 From the point of view of the Electrical Machine concept and although, theoretically, every conventional machine has its corresponding superconducting version, the limitations associated to superconductivity, restricts the real number of types of superconducting machines that can be implemented. Particularly, there are two severe restrictions to consider:

2) Powering superconducting windings that are moving and must work at cold is very complex and this is the reason why, normally, only stationary windings are superconducting, although there are exceptions.

The SEA TITAN proposal is based on the idea of reducing as much as possible the operating frequency (reduction of AC losses) and locating the superconducting windings only in the stationary part of the machine.

From the point of view of the superconductor, the idea is using MgB2 wires with very low filament diameter and also with a high resistivity matrix. This material is especially adequate for the range of magnetic field and working temperature required for this application.

The combination of these concepts led us to design a novel concept of superconducting PTO whose patent process has been started. The machine is based on a Cylindrical Switched Reluctance Machine inserted inside a flexible cryostat (Figure 2). Both sides of the machine (Active and Passive) are at cold temperature which allows a small separation between them (small airgap). The Active Side is cooled down using cooling gas coming from a Cryogenic Supply System at around 10K and it is thermally insulated from the Passive One with a radiation screen which is also refrigerated with a cooling gas also coming from the Cryogenic Supply System at around 77K. The Active Side with the superconducting wires is stationary while the Passive Side with no windings and only iron is moving up and down together with the extensible cryostat which is based on the presence of two bellows.

Conclusion, the contribution of superconductivity with respect to conventional machines is the increasing of current density and consequently the strong growth of the ampere-turns with a similar machine size. SEA-TITAN superconducting machine can easily provide one order of magnitude bigger forces than conventional ones with similar sizes, when all the different aspect, including cryogenics, are considered.

From SEA-TITAN consortium we invite anyone reading this article to contact us or visit our webpage, seatitan.eu, for additional details and collaboration opportunities.

This project has received funding from the European Union’s HORIZON 2020 Research programme under the Grant Agreement no.764014