Christian Naczinsky from the Austrian Ministry of Education, Science and Research explains his stance on the European Research Area (ERA) in Austria

If we look into the mirror of Austria’s performance in the European Research Area, we can see success. Austria’s return on investment in the European Framework Programme is positive. According to the latest available data, the Austrian research community coordinates more than 500 EU projects, punching above its weight in terms of participation and funding received from Horizon 2020.

In summer 2018, Austrian policymakers celebrated the fact that Austria had exceeded the threshold of €1 billion in EU funding from Horizon 2020. The quality of research projects with Austrian participants is among the best in Europe if measured against the success rate of evaluated projects in Horizon 2020. There is no doubt that Austrian industry benefits from a stronger link between research and innovation in Horizon 2020 since this sector represents 38% of Austria’s participation in the Framework Programme.

Based on the Austrian ERA Roadmap which was adopted by the federal government in 2016, Austria set course for reforming its national research system with the aim of improving coherence between the European and the Austrian research systems. By way of example, in the Austrian ERA Roadmap, the government agreed to initiate an evaluation of the national RTI system by the OECD as an inspiration for the next national RTI strategy 2030. The OECD review started in 2017, and the final OECD evaluation report was presented and discussed at a big conference last December. This spring, an RTI government summit, chaired by the Federal Chancellor, will kick off the drafting process of the RTI strategy 2030.

In all ERA priority fields, from joint programming to gender equality to international cooperation, Austria’s ERA Roadmap provides about 50 implementation measures with a financial envelope of some €40 million. Some measures are more important because of their legal and societal impact rather than their financial relevance.

For example, to improve the access of talented researchers to the Austrian labour market, the so-called “Red-White-Red Card” has been reformed. University graduates from third countries who completed their studies in Austria are now offered a period of 12 months (instead of only six before) after their graduation to look for a suitable job in Austria. This is a measure that seeks to keep the best brains from outside Austria within the Austrian labour market, given that they have become well-integrated members of Austrian society during their period of study.

Austria regularly monitors how far it has proceeded in implementing the Austrian ERA Roadmap. In late 2019, a second progress report will shed light on the current state of play of Austria’s national ERA Roadmap.

In 2018, an evaluation of the implementation of Horizon 2020, EUREKA, COSME, EEN and ERA in Austria concluded that the overall Austrian architecture of interaction between structural reforms on the national level, strategic networking and agenda setting, and STI funding from Horizon 2020 provides a solid basis for Austria’s success. 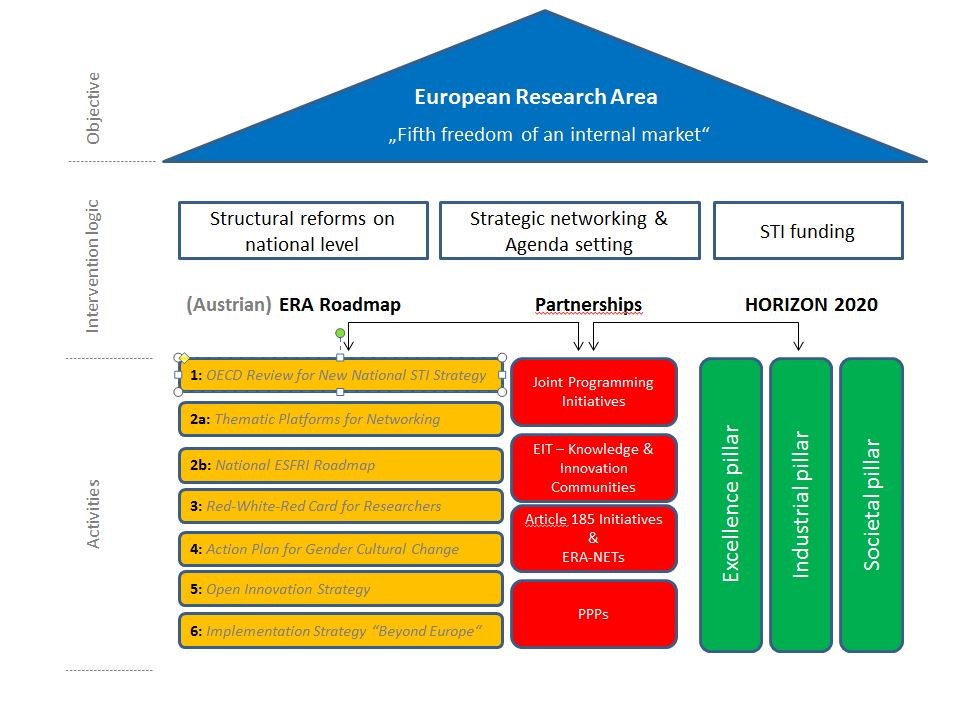 Austria might be tempted to become self-complacent unless it realised that Austria’s success in the European Research Area mirrors achievements of the past, not of the future. The mirror of ERA in Austria has two faces, one of yesterday and one of tomorrow. It is the future that – although uncertain by nature – requires a fresh look at Austria’s approach towards ERA.

The most prominent example of “tomorrow” is Horizon Europe’s focus on missions. Research and innovation will be at the core of greater societal, economic or technological challenges that shall be translated into missions with clear targets, timelines, outputs and impact on sectoral policies. Missions will require strategic planning across the future clusters of Horizon Europe. Missions will be implemented in part by R&I partnerships, which in return need to be selected, implemented, monitored and phased-out in a coherent manner.

For both missions and partnerships, the Member States are facing the task of setting priorities in the light of their own research and innovation capacity, but even more in the light of their sectoral needs. Austria will only be successful in the European Research Area of tomorrow if it goes beyond the comfort zone of its “usual suspects”, such as universities, research laboratories, and R&I-intensive enterprises.

It needs to reach out to new players in sectors like health, food, urban development, or agriculture. It needs to establish a national process of co-creation and co-prioritisation of missions and partnerships, and it needs to use the future strategic coordinating process with the European Commission in a mutually fruitful way. Europe as a whole and the Member States individually shall benefit from research and innovation in the European Research Area post-2020.

The future of ERA

In spring 2019, Austria will create a new working group on “EU missions” in view of the next RTI strategy of the Austrian government. It takes a bow to the changing ERA landscape. This is a first step into the future of ERA. When I look into the mirror of ERA, I see plenty of opportunities for Austria. Let’s embrace the ERA of tomorrow.

Head of Department for EU and OECD Research Policy