Heidi Larson, Director of the Vaccine Confidence Project™ and Professor of Anthropology, Risk and Decision Science and researcher Sara Dada at LSHTM, discuss the advancements of Ebola vaccine response

Controlling disease outbreaks has been revolutionized by advances in technology and biomedicine. Since the eradication of smallpox in the 1980s, the role of technological advances in vaccine development, surveillance and treatment has been unmistakably valuable, but often missing consideration of the perspectives which social science can contribute. Anthropologists have been actively helping to build bridges between social science and public health approaches to disease outbreak response/preparedness – most recently in the case of Ebola.

Throughout the Ebola vaccine trials in Sierra Leone, collaboration was essential between anthropologists, communities and managing the clinical vaccine trials. The purpose of the EBODAC (Ebola Vaccine Deployment, Acceptance and Compliance) Consortium – a partnership between the London School of Hygiene & Tropical Medicine, Janssen Pharmaceuticals, World Vision and the Grameen Foundation – was to develop community engagement strategies to manage rumours and build trust, and particularly to ensure vaccine compliance. In addition, an important objective was to prepare for future vaccine deployment through strengthening communities and health systems to be better prepared and able to respond to future outbreaks.

The scale of the 2014 – 2016 West Africa Ebola outbreak was both unprecedented and devastating. In attempting to stem the outbreak, the necessity of considering sociocultural and political settings in developing effective and efficient response mechanisms soon became clear. Initial communications around Ebola in the early months of the outbreak concentrated on correcting misperceptions and misinformation about the disease more than engaging local populations in a reciprocal dialogue.

For example, many sensitisation messages focussed on general knowledge of Ebola symptoms or the role of ‘traditional practices’ such as burial rituals in spreading the disease. Criticism of this strategy pointed to the lack of practical information that communities could act on to respond to their concerns – such as what to do with an exposed, infectious body or how to manage a family in quarantine, especially if help was delayed. Eventually, considering the sociocultural contexts and the needs of the community proved to be an important factor in an effective Ebola response.

Despite this recognised need, there was a lack of standardised guidance around using community engagement in outbreak settings, including around clinical trials and other research. Lessons learned from the IMI-funded EBODAC project can fill these gaps by sharing expertise that could be relevant in other settings, such as in the most recent Ebola outbreak in the Democratic Republic of the Congo.

The EBODAC project aims to build awareness and trust in the communities as well as provide a mechanism to quickly respond to concerns or rumours. Reciprocal communication strategies between health personnel and multiple levels of the community proved key. Respecting traditional power structures and consulting both local leaders and community members on their concerns, as well as ideas, regarding participant recruitment and the trial process, increased the acceptability of the trial in the community. 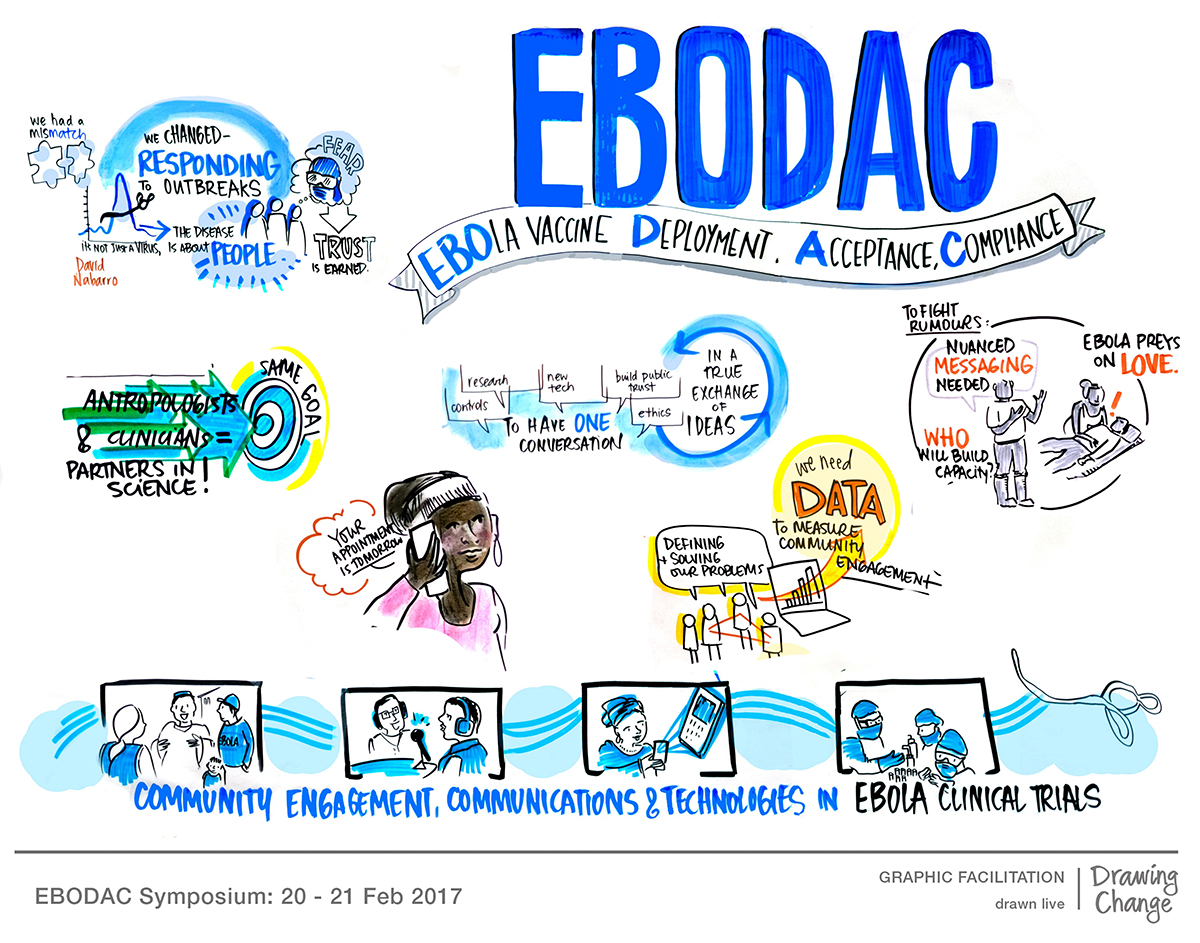 In one example, through speaking with local community members, researchers found that the stigma surrounding Ebola would be a barrier to the implementation of formal identification of trial participants in these communities. Researchers needed to identify potential trial volunteers in a confidential but reliable way. This led to the development of an identification kit that combined iris scanning and fingerprinting biometrics to confidentially and correctly identify volunteers during subsequent visits, without the use of a print ID card.

In another innovation, EBODAC uses communication technology to streng­then response and preparedness for Ebola outbreaks through a mobile training support system (MOTS). This mobile tool provides community health workers in Sierra Leone with interactive training materials in local languages that can be accessed from their regular mobile phones at no cost. These modules provide information relating to the Ebola vaccine and disease surveillance practices to local community members to prepare them for future vaccine deployment. By considering the context of the setting – such as language, accessibility and resource availability – anthropological methods have informed the pilot and rollout of MOTS to make it a useful tool in those communities.

The work of EBODAC has brought together not only the different fields of anthropology and medical and communication technologies but also different sectors in a public-private partnership. In outbreak or disease-preparedness settings, private-public cooperation, such as EBODAC, can be a valuable support to in-country operations and capacity building.

Looking forward, EBODAC’s newly developed gap analysis assessment tool will help governments assess their level of preparedness in responding to Ebola outbreaks or deploying the vaccine. These tools and the inter­disciplinary-approach embraced by EBODAC could provide valuable insight into settings such as the DRC where outbreak response is highly influenced by socioeconomic and political factors such as ongoing conflict in the region. The work led by EBODAC and the harmony of technology and anthropology collaboration could become a model for future disease preparedness and outbreak response programmes.

Director of the Vaccine Confidence Project™ and Professor of Anthropology, Risk and

Research Assistant at the Vaccine