External aircraft noise has become an important political issue. With a 5% estimated annual growth rate of air traffic volume, substantial reductions of aircraft noise are required to keep air travel environmentally sustainable. The ACARE Strategic Research and Innovation Agenda (SRIA) ‘Flightpath 2050’ calls for a reduction of the perceived noise of flying aircraft by 65% relative to typical new aircraft in the year 2000.

In contrast, the noise radiation of a turbofan is substantially increased when it is installed under the wing of an aircraft. This phenomenon was first reported already in the 1980s. Its main cause is the scattering of the aerodynamic near field of the turbofan’s jet at the trailing edge of the wing. The problem is aggravated by the development of engines with increasingly large jet diameters and smaller jet speeds, which are necessary to improve the propulsive efficiency of the jet and reduce the fuel burn of the aircraft. A second cause for the noise increase of wing-mounted engines is the reflection of the jet noise generated close to the nozzle on the lower surface of the wing, which leads to an increase of about 3 dB for the sound radiated downward into the unshielded side of the wing, but the noise radiation into the shielded direction opposite the engine is substantially reduced. This shielding effect could be used if the engines are installed on the upper side of a wing, a possibility for the application on business jets with rear-mounted engines mounted above the horizontal stabiliser.

For large passenger aircraft, engines with high bypass ratios (HBR) offer a substantial reduction of jet noise and better fuel efficiency. However, these large engines are mounted closer to the wing, which leads to additional installation-noise sources. Ultra-high by-pass ratio (UHBR) engines are expected to have significantly lower isolated engine jet noise levels than HBR turbofans due to a further decrease of nozzle exhaust velocities. But a major risk remains the generation of unsustainable noise levels due to jet-airframe interaction. 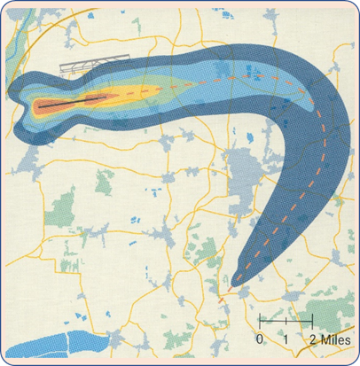 For business jets, where the engines are mounted at the rear part of the fuselage above the wing, reflections of jet noise on the tailplane or fuselage also increase aircraft noise levels. As an example, an innovative Falcon jet aircraft configuration was designed to reduce rearward radiation of engine noise and jet-noise installation effects via a U-shaped tail located below the engine. Although this configuration is promising in terms of aircraft noise reduction, the proximity of the jet exhaust generates higher unsteady pressure loads on the aircraft surfaces compared to conventional afterbodies.

With the aim to halve jet-airframe interaction noise, the DJINN project offers a significant step-change and improvement for ensuring a favourable environment, achieving considerable relief for citizens living in the vicinity of large airports. As an example, the figure above exhibits the noise situation at Munich airport on runway 08R, a 4000m-long runway – an airport located on the territory of four(!) different municipalities. Of course, jet interaction noise is only one part of the total noise, but this source needs to be tackled to reduce the total community exposure illustrated by the blue area in the footprint.

In conjunction with the motivation to improve the environment, the DJINN project will also support industrial and economical leadership in the highly competitive global aviation market. The ability to understand, model and predict jet noise and its installation effects is a key requirement in the design of efficient and environmentally acceptable aircraft systems. Against this background, the DJINN project sets out a highly ambitious and innovative programme of work conceived to enable optimised aircraft-engine designs that take full advantage of UHBR turbofan technologies.

The main driver for the success of the DJINN project relates to the technical objectives, where first of all, the DJINN project builds on the advantages of previous projects, e.g. the predecessor EU project JERONIMO, which has advanced the physical understanding of jet-flap interaction noise occurring for installed UHBR engines with a bypass ratio larger than 12.

Still, the main goal of work is to reduce uncertainties in jet noise characterisation and to highlight the key features of jet-flap interaction noise mechanisms through advanced measurement techniques in wind-tunnel tests and high-fidelity numerical simulations. Thus, the DJINN project will address the whole range of jet-airframe interaction noise using two representative industrial aircraft configurations, as illustrated in the Figure above, (i) an under-wing UHBR engine placed on a large commercial aircraft, and (ii) a business jet with rear-fuselage-mounted engines.

Thus, the main objectives of the DJINN project are characterised by:

In close conjunction with these objectives, a second group of objectives of the DJINN project are:

Altogether, these objectives focus on the achievement of a more general objective, namely, to demonstrate the prediction capabilities of HiFi-CFD on UHBR mid-frequency installation noise and jet noise of business jets – and to assess potential benefits, technical requirements, implementations of coupling noise and aerodynamic predictions (CFD-CAA), to pave the way for future multi-disciplinary, multi-objective design optimisation challenges.

DJINN has received funding from the European Union’s HORIZON 2020 Research programme under the Grant Agreement no. 861438.