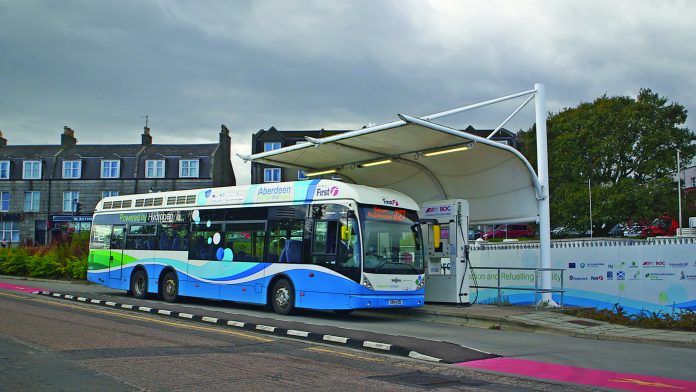 The transition to zero-emission across all vehicle types for public and private transport is underway. It is supported by the government’s ‘Road to Zero Strategy’ and is gaining increasing support from the public, who are keen to see permanent improvements to air quality. Forward-looking councils and fleet operators are taking action to provide clean public transport alternatives, including buses.

There are currently only two options for zero-emission public transport: the pure battery electric vehicle (EV) or the hydrogen fuel cell EV.

Hydrogen is an attractive, clean-fuel option for buses and other large vehicles that typically do hundreds of miles per day and require frequent, fast refuelling. It takes just 10 minutes to refuel a bus and five minutes to refuel a car, delivering ranges of around 350km and 500km respectively.

Hydrogen is emission-free, emitting only water from the tailpipe of the vehicles it fuels. It can be produced in a number of ways which vary inefficiency, carbon intensity and cost. The most common production method today is steam methane reformation (SMR), which can be a low-carbon process when used with carbon capture.

Clean, ‘green’ hydrogen, however, can be produced using electrolysis – a process that extracts hydrogen from water with no emissions. This is how hydrogen is produced at Europe’s highest performing hydrogen refuelling station, Kittybrewster in Aberdeen. Once generated, the hydrogen is compressed for efficient storage and is dispensed into vehicles using a pump which is similar to traditional petrol or diesel fuel pump.

New infrastructure for hydrogen refuelling requires capital investment in the same way as electric vehicle charging infrastructure does. BOC works with councils to help them understand the economics associated with the installation and operation of the infrastructure, the vehicles and the hydrogen fuel. Priorities vary, with some councils seeking cost parity with diesel at the pump, while others recognise the significant cost-benefit associated with reducing air pollution and carbon emissions.

The cost of operating a hydrogen refuelling station using electrolysis is heavily influenced by the cost of the electricity required for hydrogen production. Significant economies of scale, however, can be achieved when production levels are higher. This helps to reduce the fuel cost per mile to figures that are comparable with diesel which helps to increase demand at the pump.

Producing hydrogen using SMR, while not as green as electrolysis, can be cheaper and still provides a pathway to green hydrogen in the future. With any new project, BOC works with the council at the outset to align costs with their objectives and to identify potential sources of funding.

Element Energy, a specialist low carbon energy consultancy, reports that by the mid-2020s fuel cell buses will cost less than £350k, even at small production volumes. With expansion in the global supply of key components, Element Energy expects prices to reduce to below £300k by the end of the decade.

As the price of hydrogen at high-volume refuelling stations falls, the total cost of ownership of a fuel cell vehicle can beat even the best-case battery-electric options. This makes fuel cell vehicles a very attractive option for councils looking to achieve net-zero climate goals.

A blueprint for success

The Kittybrewster facility in Aberdeen, which started life refuelling single-decker buses, has scaled up over time and is now refuelling double-decker buses, vans, refuse lorries and is also open to the public. Councils that want to reproduce Aberdeen’s success should look to replicate its three-way partnership model. This comprises a council or city region to drive the process; a cluster of vehicle users and an infrastructure provider to design, install and operate the refuelling station.

Hydrogen refuelling is in daily operation worldwide and is attracting serious interest up and down the UK. A number of city councils are already taking action and starting to reap the rewards of hydrogen as a zero-emission fuel for transport.

The Government’s drive to decarbonise transport is ambitious, but with the introduction of hydrogen for transport, councils can take significant action towards reducing emissions and delivering on their net-zero commitments.