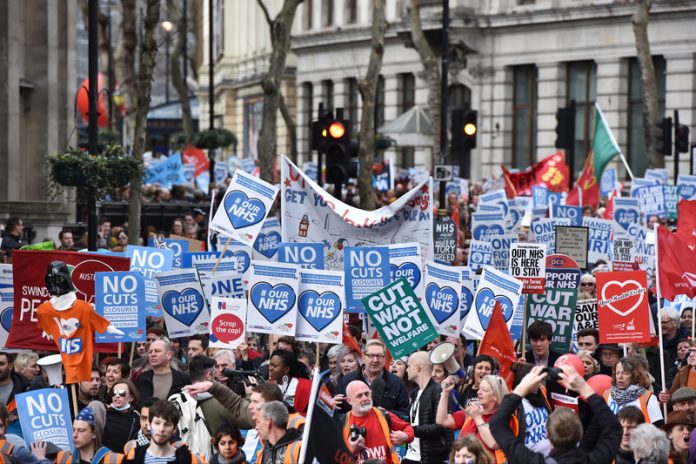 A newly published austerity report has linked Conservative economic policy with the deaths of 120,000 people, urging the government to increase spending

The authors of the austerity report have branded Conservative cuts to public spending a ‘public health disaster’ and ‘economic murder’.

The paper stated that an extra 45,000 deaths took place in the first 4 years of austerity compared to pre-election levels.

If deaths increase along this trajectory they will stand at 200,000 by 2020, even when taking to account the extra funding that has been promised for public services.

Mortality rates in the UK declined steadily from 2001 to 2010, a trend which quickly reversed when austerity policies came into force under the Conservative-led coalition government elected in 2010.

While the report concludes that Conservative policies ‘may have produced’ the increase in mortality, it does not go as far as calling the deaths ‘avoidable’.

This year the government promised to relax its restrictions on public spending, lifting the cap and announcing an extra £1.3 billion in the spring budget.

The report was compiled by researchers from Oxford, Cambridge, and University College London and published by BMJ Open Today.

They also pointed out similar trends in countries that were also enduringity policies, such as Portugal.

During the 20th century life expectancy in Britain increased from 46 to 76 years.

This trend was also reversed after the Conservative government came to power in 2010, which has also been blamed on austerity policy.

The ageing population combined with extra pressure on nursing homes and the NHS has put the elderly at risk, according to the study.

The researchers have stated it would cost an extra £6.3 billion to plug the ‘mortality gap’.

A spokesperson from the Department of Health said that the study cannot ‘draw any firm conclusions’ about the underlying causes of increased mortality.

However, local councils are urging the government to take the findings seriously and increase public spending.