Here, the question of how net zero carbon emissions can be achieved via existing UK policy is further discussed

For more than two decades the industrialised world has recognised the need to control our emissions to limit damage to our environment, because experts advised that an uncontrolled spiralling of pollution would destroy the ecosystems and water supply fundamental to supporting our modern and rapidly expanding global civilisation.

Since the Kyoto Protocol was adopted on 11 December 1997 and ratified on 16 February 2005, the international community, made up of the 192 signatories, committed industrialised countries and economies to limit and reduce greenhouse gases (GHG) emissions in accordance with agreed individual targets.

The UK introduced and passed the “The Climate Change Act 2008”, which committed the UK to an 80% reduction in carbon emissions relative to the levels in 1990, to be achieved by 2050.

The 2008 Act introduced a carbon unit, a carbon unit limit, a carbon budget, a monitoring and reporting system and a carbon trading scheme. This is in essence a system of control and penalty or taxation the government imposed on all businesses in the UK. So whilst the government committed to an international treaty, which was in effect voluntary, it enshrined these voluntary commitments into law in order to force compliance.

How did The Act work for carbon emissions?

The Act provided advice and guidance for those governed by the law and reduction targets for the consumption of energy. This resulted in businesses focusing mainly on energy efficiency and waste reduction. This spawned a generation of new technologies and practices, which became widely available, the most common being efficient light bulbs and waste recycling.

The Act also resulted in the Gas Act, the Electricity Act and the Utilities Act, which placed an onus on energy producers and suppliers to reduce waste and improve efficiency, which gave rise to smart meters, solar panels and a general increase in awareness by the public of how much energy they were using.

In 2018, ten years after the Act came into force; the “Centre for Climate Change Economics and Policy” issued an update report detailing our progress. The chart below, from the report, shows the UK was on target and the UK government gave itself a public pat on the back both at home and on the international stage, claiming its policies were the primary reason the UK was meeting the targets. 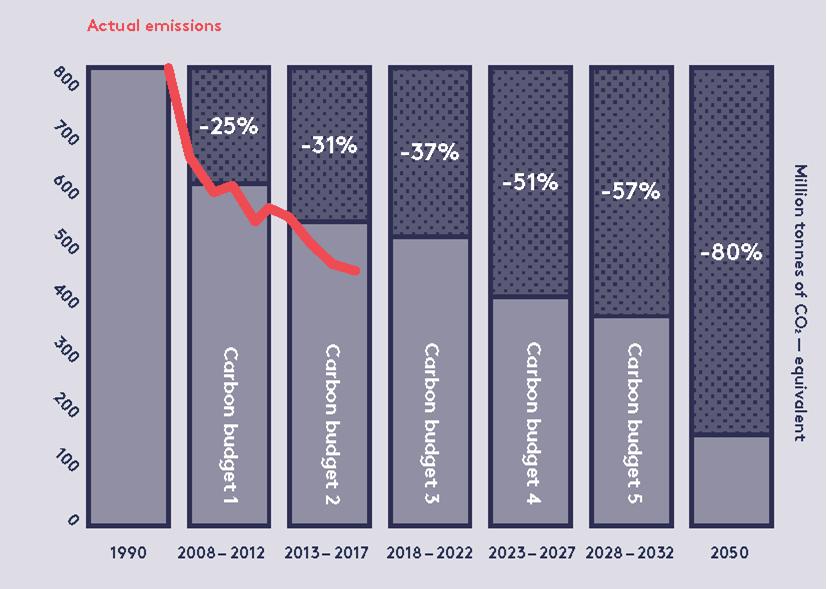 These results were hotly contested and the government was accused both at home and on the international stage of manipulating and cherry picking data, simply to look good politically. One look at the long term UK emissions below would seem to support the criticism of the government, because there is no real change to the downward trend, which can be attributed to the private sector’s drive to improve technology, providing private sector organisations with a market edge, leading to an increased market share and profits. 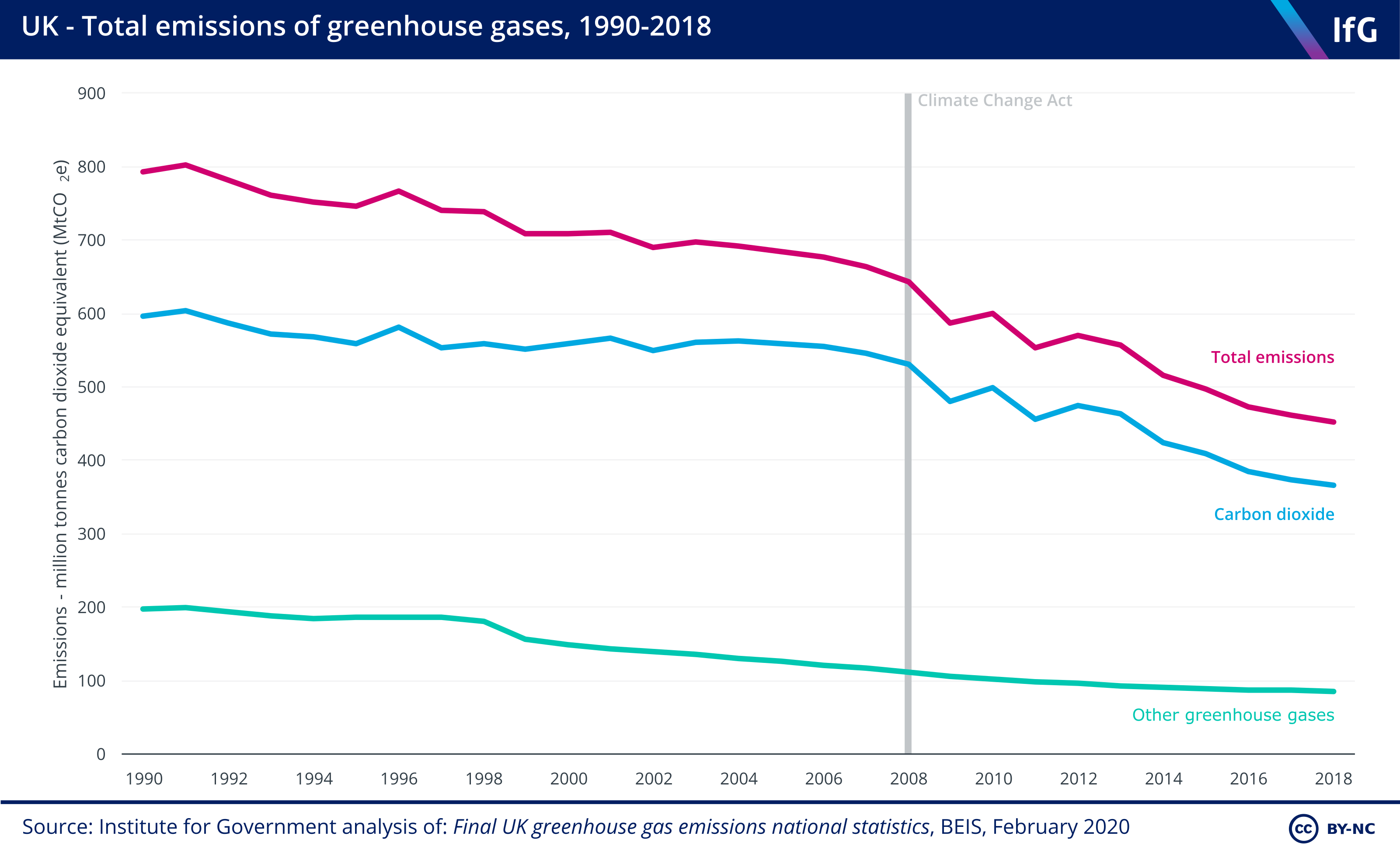 Following the introduction of the Paris Agreement, which came into effect on 4th November 2016, parliament debated what additional steps would need to be taken to meet the legally binding targets agreed to. This became a major point of disagreement, because whereas the previous targets committed to by the UK were voluntary, the Paris targets were legally binding on the UK itself.  The difficulty of reaching an agreement stemmed from the language of the Paris Agreement because it committed to “limit global warming to well below 2, preferably to 1.5 degrees Celsius, compared to pre-industrial levels”.

Is the UK fighting a meaningless battle?

From a scientific perspective there is physically nothing the UK can do in terms of either policy or actions that could possibly affect global warming given the UK is responsible for only 1% of global emissions. Whilst the intentions of the UK government were to further reduce emissions and pollution, using global warming as a measuring stick against progress was both impractical and out of our control.

There is also another side to the argument, which is that “global warming” and global cooling are part of a natural cycle and not something we can influence. Our planet has been warming and cooling for billions of years without any input or influence from human activity, which is apparent by the fact the geological record can prove ice ages are cyclic. Terms such as “settled science” were adopted as a mechanism to protect the goals of the Paris Agreement, with some scientists arguing that human activity is the primary cause of global warming and no further debate would be entertained.

“The science is settled”

In reality, no real scientist would claim “the science is settled” as this in itself is antithetical to the whole discipline of science and we have entered an era of the political pollution of science, where “science” is shaped and used to justify policy.

In June 2019, three years are the Paris Agreement was adopted, parliament amended to the Climate Change Act of 2008 by enacting the “The Climate Change Act 2008 (2050 Target Amendment) Order 2019”, which requires the government to reduce the UK’s net emissions of greenhouse gases by 100% relative to 1990 levels by 2050. Doing so would make the UK a ‘net zero’ emitter.

Not on track to meet an 80% reduction

Having reviewed the entirety of the act, its scope and carefully reviewed policies, proposals and funding coming out of our current government, there is a glaring absence of the “actively removing greenhouse gases” part, which by the government’s own admission is fundamental to achieving the goals set out.

The UK is currently not on track to meet its previous, less ambitious, target of 80% emissions reductions by 2050. The Climate Change Committee has said that getting to net zero is “technically feasible but highly challenging”. Doing so will require sustained policy interventions across several sectors – many of which will be complex, costly and time-consuming.

It begs the question, why would a government enshrine into law a target without providing the framework, plans, policy and funding to achieve it?